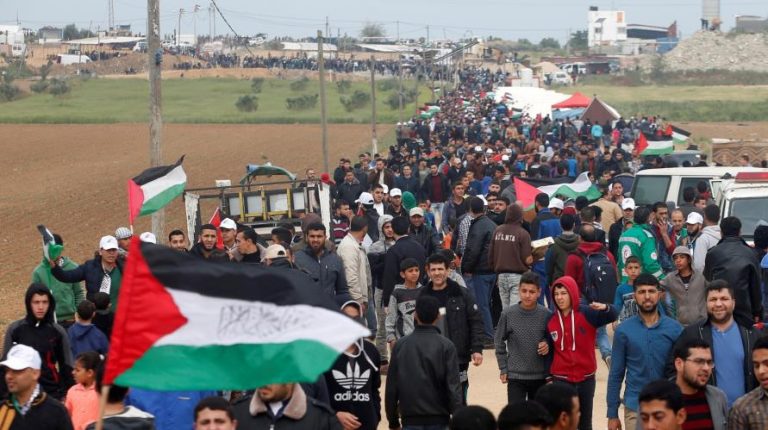 The Israeli forces killed a 15-year Palestinian teenager, and injured about 50 others during the mass demonstration which took place on Friday close to the Israeli borders with the Gaza Strip, according to the health authorities in the strip.

Israel said that its forces were confronting the demonstrators who attacked the forces with hand grenades and explosive units from the strip which is controlled by Hamas.

More than 220 Palestinians were killed in Gaza since the beginning of the weekly demonstrations in Gaza in March 2018, while thousands were injured. The demonstrations titled the ‘March of Returns’ called for the Palestinians right to return to their homes which were occupied by the Israelis after 1948.

Meanwhile, the Palestinians carried out the Friday prayer at an area by the Al-Rahma gate of the Al-Aqsa Mosque compound for the first time in 16 years since the Israeli army closed it in 2003.

The Jordan-run Religious Endowments Authority, which is mandated with overseeing East Jerusalem’s Muslim and Christian holy places, announced the reopening of the Al-Rahma gate. The gate has a significant location inside the compound as it leads shortly to the Al-Aqsa Mosque itself.

Last week, the Palestinian Prisoners Club announced that the Israeli forces have arrested 40 Palestinians in different places in the West Bank and Jerusalem.

According to the statement of the club, the list of prisoners includes 22 youth who were arrested in the compound of the Al-Aqsa Mosque, after the Israeli forces stormed the holy place on Tuesday and abused the worshipers in the mosque.