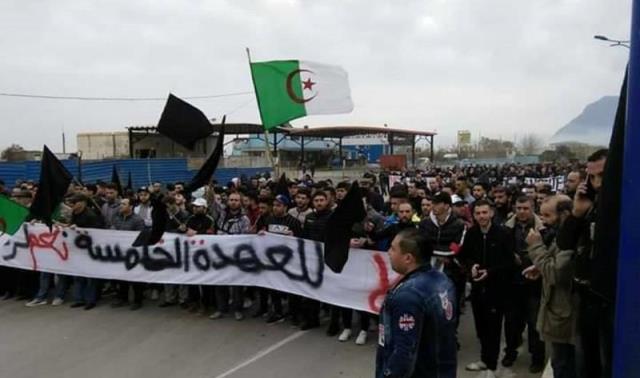 Thousands of Algerians demonstrated in several cities across the country against the Algerian President Abdelaziz Bouteflika’s announcement that he will run the coming presidential election seeking his fifth presidential term.

The protestors were chanting against Bouteflika with slogans like “no fifth mandate” “no Bouteflika” while waving the Algerian flag. They also clashed with the security forces who were deployed intensively in main squares of the capital and major cities.

Security forces responded with tear gas and cordoned off the May 1 Square in Algeria (the capital) and prevented protesters from entering it. Algeria’s authorities has banned demonstrations in the capital city since 2001.

On 10 January, the incumbent Algerian President Bouteflika, 81, who has been ruling Algeria since 1999, confirmed his intention to seek a new five-year term in the election to be held on 19 April, despite concerns over his health condition. He has been wheelchaired since 2013.

The Algerian state news agency covered the demonstrations against the president for the first time in the North African country.

The agency said that hundreds of protestors, most of them were youth, demonstrated after the Friday prayer in the capital city against the president’s bid for fifth term.

Last Thursday, the Algerian presidency announced that Bouteflika headed to Switzerland for “regular medical checks.” Bouteflika still have millions of supporters in Algeria as he succeeded in ending the civil war that hit the country in the 1990s.