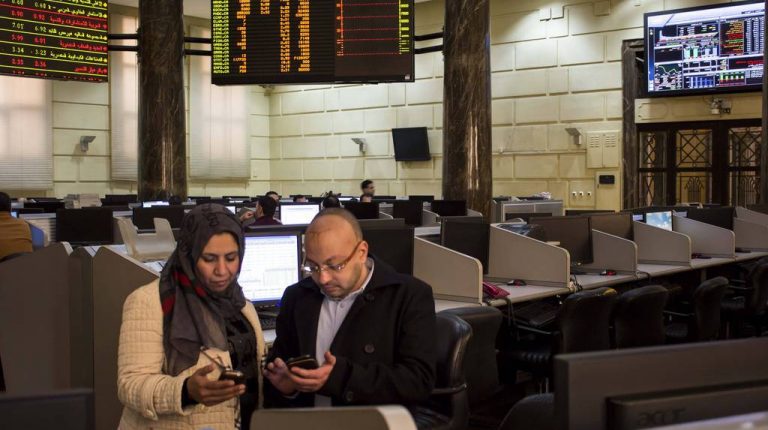 Egypt shares are expected to extend rally in the short term as foreign investors are expected to capitalize on cheap valuations for mid and small caps, after a sell-off streak to book gains from a sustained market rally.

“The Egyptian Exchange (EGX) is likely to perform positively this week amid heavy liquidity,” analysts said.

The EGX was able to hold above 16000 points despite a streak of profit-taking,” customer relations manager at Arabeya Online Michael Mamdouh Naguib said.

“The benchmark EGX30 index has changed its direction to move upwardly in the short-term as it broke resistance at 16,335 points last week, ending correction movement temporarily,” Naguib added.

On the other hand, the small- and mid-cap EGX70 index is still moving downwardly, Naguib noted, pointing out that the index may rebound in the few coming sessions.

He indicated that the EGX70 has support at 790 points and resistance at 820 points.

Meanwhile, Ayman Fouda, head of the capital markets committee at the African Economic Council, forecast an extend upwards performance for this week’s sessions.

The index is likely to end the correction wave by breaking the level of 15,500 points this week, Abdel Naeem stressed.

The EGX30 may see a sideways trend between 15,500 and 16,000 points during the second half of this year if it failed to close the week in green territory, he noted.

On the other hand, the small- and mid-cap index EGX70, the most affected index by the correction phase, rebounded to 811 points at last week’s close after hitting 792 points for the first time since November 2017, he highlighted.

Saeed El-Feki, CEO of Osool ESB Securities Brokerage, expected the EGX to continue its positive performance this week on the back of purchasing powers.

Sideways moves and dipping volumes are expected to dominate July and August’s trades on the back of summer holidays,” Pharos Investment Bank said.

EGX closed last week on an up note boosted by foreign investors.

Trading volume amounted to nearly 241.7 million shares exchanged at a turnover of EGP 990.9 million through 28,280 transactions.

While the market capitalisation lost EGP 3.2bn and closed at EGP 836.26bn.

Fifteen companies listed on the EGX have denied their ties with the ailing private equity firm Abraaj Group last week.

Moreover, Egyptian Arabian Themar Securities Brokerage, Samad Misr (Egyfert), Egyptian Real Estate, International Co for Investment & Development, and Egyptians for Investment and Urban Development were also among the companies which have no ties with crisis-hit Abraaj, once one of the developing world’s influential investors.

This FV reflects the bank’s valuation and the impact of rights issue projected to take place in 2020 in accordance with the management guidance, Pharos said in a research note.

In 2012, the UAE-based lender had invested EGP 1.8bn as prepayments for a potential capital increase, the research firm indicated.

The minority shareholders in the Egyptian unit has to subscribe to a rights issue of an amount equivalent to ADIB UAE’s subordinated loan to transfer the EGP 1.8bn while maintaining the same shareholding structure as ADIB UAE holds a 50% stake in ADIB Egypt, Pharos highlighted.

Accordingly, the total transferred sum to the paid-in capital amounts to EGP 3.6bn, including EGP 1.8bn fresh capital injected by minority shareholders and EGP 1.8bn transfer of ADIB UAE prepayments, according to the research note.

At the level of ADIB – Egypt’s standalone business, the bank logged EGP 806.4m in profits for the 12-month period ended last December, versus EGP 434.8m in the corresponding period a year earlier.

On the other hand, Pharos has reiterated their ‘Overweight’ recommendation of Talaat Moustafa Group Holding (TMG Holding) based on a fair value (FV) of EGP 17.90 per share.

The FV was mainly driven by the company’s Madinaty-based commercial portfolio, accounting for 71.1% of Pharos’ total valuation, according to a recent report.

TMG Holding reported a 28% year-on-year surge in consolidated profits for 2018.

Furthermore, TMG net profit amounted to EGP 1.77bn in 2018, versus EGP 1.32bn in 2017, including minority shareholders’ rights, the property developer said in a filing to EGX.

In the context, the company’s management proposed a cash dividend of EGP 365m or EGP 0.17 per share for 2018, TMG Holding said in a separate statement.

On the other hand, in company news, Arabia Investments, Development and Financial Investment Holding Co (AIND) announced the completion of the acquisition of International Company for Leasing’s stake in UI Finance at a value of EGP 14m.

The company has purchased over 99% stake or 60,000 shares in UI Finance, International Company’s entire stake, according to a statement to the EGX.

The transaction is consistent with the independent financial advisor’s report on the fair value for the minority shareholders’ equity in UI Finance estimated at minimum EGP 13.8m, Arabia Investments indicated.

The company said it is seeking to get the Financial Regulatory Authority’s (FRA) approval.

In other earnings news, Telecom Egypt reported a 14% year-on-year increase in its consolidated profits for 2018, recording EGP 3.5bn on the back of revenue growth.

The company attributed the increase in revenue to the 36% rise in retail business revenue which accounts for 71% of total revenue growth.

Moreover, the company’s revenues from its agreement with India’s market leader Bharti Airtel worth EGP 1.6bn have boosted its wholesale business revenue by 12% in 2018 as compared to 2017.

Additionally, the number of mobile phone subscribers totalled 3.9m at the end of 2018, the state owned company said.