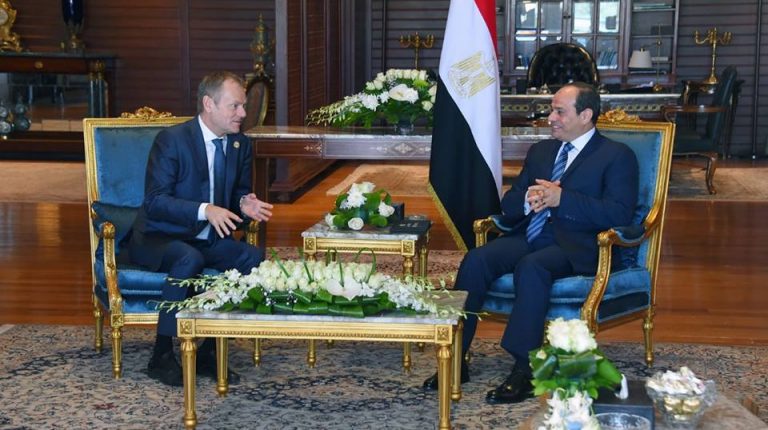 The two-day summit witnessed the participation of 50 EU and Arab League member states. This is the first summit to bring together heads of states and governments from both sides.

During his meeting with Tusk, Al-Sisi affirmed the important position of the EU in the framework of Egypt’s foreign policy, which was based on mutual respect and appreciation of each other’s specificities, not only because the European side is Egypt’s first trading partner, but also due to the deep ties between the two sides.

Al-Sisi expressed Egypt’s aspiration to enhance cooperation with the EU in the fight against terrorism and violent extremism in accordance with a comprehensive approach that addresses the roots of terrorism and extremism.

On the sidelines of the summit, May said it has made good progress in Brexit talks and a deal was still within grasp. “We still have it within our grasp to leave the EU with a deal on 29 March,” she stated. “We’ve had good progress, constructive discussions with the EU.”

Before the launch of the summit, Al-Sisi also met Saudi King Salman bin Abdelaziz ahead of the summit. An official reception ceremony was held for Salman upon his arrival, Egypt’s state-run news agency MENA reported.

Tusk praised Egypt’s efforts in the fight against illegal migration, stressing the EU’s appreciation for these efforts which were reflected in stopping illegal migration from Egypt since 2016. He stressed that Egypt is a model country in the region in this regard.

Before his arrival to Egypt, Salman ordered the release of several Egyptian expats who were imprisoned in Saudi Arabia in different cases, and they could return now to Egypt, after coordination with the Egyptian embassy in Riyadh.

Al-Sisi also met with Iraqi, Tunisian, and Cypriot counterparts in which they discussed bilateral relations.

Editorial: The referendum: One step forward