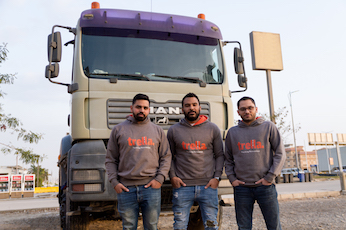 Trella, the trucks marketplace which connects shippers with carriers, announced on Sunday that it has raised more than $600,000 in a pre-seed funding round led by Algebra Ventures, with participation from strategic investors, global venture capitals, and notable angel investors including Esther Dyson and Jambu Palaniappan.

The new marketplace aims to renovate the deeply fragmented trucking industry plagued by asset under-utilisation, and a lack of transparency, consistency, and reliability.

In order to do so, Trella will reduce the costs for shippers through improving both load utilisation and efficiency, in addition to offering transparent pricing schedules, and enabling real-time shipment tracking.

The marketplace was founded in 2018 by Omar Hagrass and Pierre Saad.

They were joined by Muhammad El Garem, who was previously a business development manager at OLX as he served as the head of operations.

“Building on the fantastic success of ride-hailing start-ups, we built a similar solution for the freight industry in the region to improve efficiency throughout the supply chain,” Hagrass stated.

The former Head of Uber Eats, Jambu Palaniappan, expressed his excitement to invest in Trella as part of their pre-seed funding round, as the premise of bringing world class logistics technology to shippers and carriers across Egypt is a strong one.

Similarly, the angel investor, and the Executive Founder of Wellville, Esther Dyson, said that Trella’s combination of Hagrass’ real-world logistics experience and Saad’s tech experience is perfect for the task of making the region’s trucking infrastructure more transparent and efficient.

“We are thrilled to be leading this round,” explained Karim Hussein, Algebra Ventures’ managing

partner, adding, “The large and highly fragmented freight market in Egypt is ripe for technological disruption.”