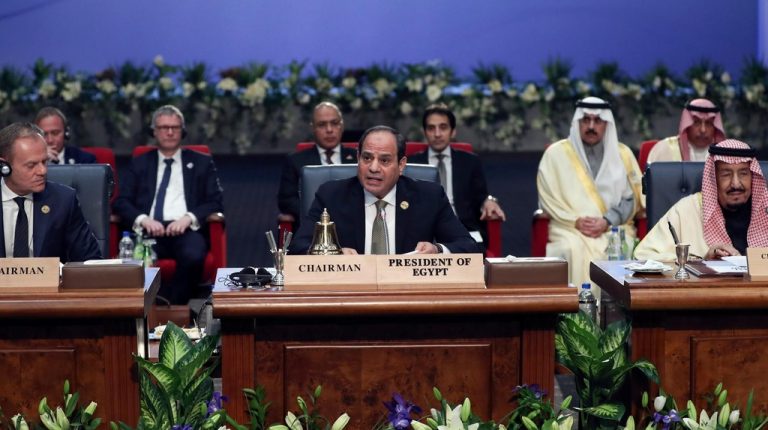 Egypt’s President Abdel Fattah Al-Sisi has asserted that priorities are different in Europe and Egypt, as for Egyptians, what matters the most is protecting the country from destruction and collapse.

Al-Sisi said so during his answer to an international reporter, who asked how Egypt received the EU criticism to the human rights situation in Egypt. Al-Sisi and the President of the European Council, Donald Tusk, held a press conference, following the closing session of the summit.

“Our priorities are different, yours are to achieve luxury, but here, we are protecting our country from destruction and collapse,” Al-Sisi said.

Al-Sisi noted that if a terrorist attack hit Sharm Al-Sheikh, it will be turned into a city of ghosts. “You are talking about the executions, but you do not have to direct us.  When someone was killed in a terrorist attack, his family demands justice. You will not teach us humanity. Respect our morals and humanity,” Al-Sisi responded.

Earlier on Monday, Al-Sisi said that the EU-Arab summit was successfully concluded on Monday, asserting that what connects European and Arab countries are more from what divides them.

During his speech in the concluding session, Al-Sisi added that the participating countries agreed to hold the upcoming summit in Brussels in 2022.

“I am openly wondering with brothers, is not the time to reach an understanding to fight terrorism?” said Al-Sisi during his speech on Sunday. The president asserted that in order to ideologically fight terrorism, prevent its funding and other support, Arab and European countries have to cooperate together to fight it.

“The danger of terrorism is rampant in the whole world,” said Al-Sisi, noting that Egypt put forward a comprehensive vision to fight terrorism.

“We view the migration issue, not as a challenge, but as a cooperation file,” Al-Sisi highlighted. “Egypt hosts large numbers of refugees, and it receives them with hospitality, despite harsh economic conditions,” Al-Sisi added.

The president also addressed the Palestinian cause, asserting that it is the first and a central issue for Arab countries. He emphasised the significance of restoring the legitimate rights of the Palestinians.

The president also addressed the Palestinian cause, asserting that it is the first and a central issue for Arab countries. He emphasised the significance of restoring the legitimate rights of the Palestinians.

Al-Sisi called for a comprehensive and an equal resolution to tackle the Palestinian-Israeli conflict.

Meanwhile, Al-Sisi also urged Arab and European countries to reach solutions for the ongoing conflicts in Yemen, Syria, and Libya.

The president maintained that enhancing the economic cooperation will contribute toward facing the mutual challenges. He asserted the need to seize the opportunities in cooperating in the fields of agriculture, industry, trade, transport, energy and others.

“In a time of growing tension and unpredictability, we need to work together, taking into account our shared interests and common challenges to create the right conditions for long-term stability, which is the only way to guarantee our citizens the peace and prosperity they deserve,” said Tusk during the summit.

“We must show them that our cooperation is comprehensive, strong, and has a concrete impact on their everyday lives,” Tusk added.

“Fostering intercultural dialogue, empowering a vibrant civil society, and prioritising education and opportunity can help create peaceful and stable societies, less susceptible to the messages of violent extremism, and to counter-balance the negative impact which populist narratives can have on the resilience of our societies,” Tusk maintained.

The summit tackled the issues of common interest of Arab and European countries, including the peace process in the Middle East, the crises in Libya, Syria and Yemen, fighting terrorism and authorised cooperation, as well as reaching permanent solutions to maintain security and peace in the region.

Moreover, during his speech in the summit, the Palestinian President Mahmoud Abbas asserted that any settlement plan which is not based on international legitimacy and that East Jerusalem is the capital of an independent state of Palestinians, will fail.

Abbas called for an international conference to sponsor negotiations aimed to end the Israeli occupation of Palestinian territories.

The summit also addressed multilateralism, trade and investment, migration, security, and the situation in the region.

You have to let the novel choose its own identity: Amr El Gendy

To those who will not read these words

What are the socio-cultural dimensions behind the phenomenon of harassment? (Part 6)

Morals and the meltdown