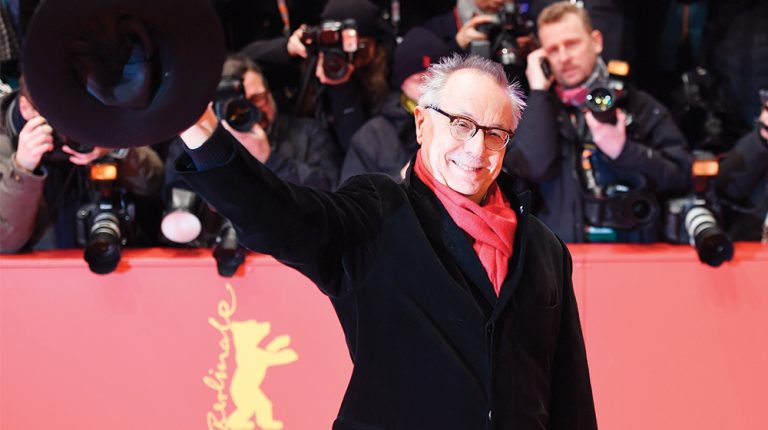 The 69th Berlin International Film Festival has come to a successful conclusion on 16 February. On February 17 — “Berlinale Publikumstag” — movie-goers flocked to cinemas a last time to experience the highlights from the different sections of this year’s festival. With 335.000 tickets sold and its wide-ranging programme, the Berlinale was again a smash hit with audiences and culminated magnificently in the Award Ceremony at the Berlinale Palast on February 16.

At the emotional Closing Gala, Nadav Lapid’s film Synonymes (Synonyms) was awarded the Golden Bear for Best Film. During the ten days of the festival, the Honorary Golden Bear was awarded to actor Charlotte Rampling, and Berlinale Cameras to director Agnès Varda, producer Sandra Schulberg, director Herrmann Zschoche, and long-time head of the Panorama Wieland Speck.

To summarise the accomplishments of his term in office as director: almost five million tickets were sold; around 7,000 films were screened in the programme; and 164 Bears were awarded, according to the festival’s statistics.

From 2002 to 2019, Dieter Kosslick steadily developed the Berlinale and the accompanying European Film Market (EFM) further.

Dieter Kosslick’s many innovations include: the establishment of the section Perspektive Deutsches Kino, the Berlinale Special with the Berlinale Series, and the special presentations Culinary Cinema, Berlinale Goes Kiez and NATIVe. He also launched new initiatives, such as Berlinale Talents, the World Cinema Fund, as well as the Berlinale Co-Production Market.

Under Dieter Kosslick’s direction, the Berlinale established itself as the world’s biggest audience festival, and sharpened its profile and sociall critical stance. During this process, the festival grew and opened itself up to new target groups. In 2019, the programme attracted around 22.000 accredited professionals from 135 countries.

During the 2010 edition, cinematic art was presented in its many facets, formats, and genres. Also, lively debates were held on cinema, art and the industry.

This year’s EFM has also reported positive results, with high visitor and exhibitor turnouts at the EFM’s two venues, the Gropius Bau and the Marriott Hotel. Over 550 exhibitors from 67 countries — including for the first time Uzbekistan — presented themselves at nearly 200 booths to participants from 111 countries. Of the 730 films shown in over 1,000 market screenings, approximately 600 had market premieres. Numerous future-oriented EFM initiatives, such as EFM Horizon, were received extremely well by visitors. The Berlinale Africa Hub provided a platform for the diversity of African cinema. And the Zoo Palast was consistently packed during the Drama Series Days. Here insights were given into current and upcoming projects on the international series market, as well as into the strategies and plans of the most important market participants. Enthusiastically received was also Norway in Focus, with its specially erected Norway House located opposite the Gropius Bau.

Set against the backdrop of current political changes, this year’s World Cinema Fund (WCF) Day revolved around the situation of the film industry in Brazil. An additional panel was devoted to the topic of audience building and design. It focused on strategies with which films might reach future viewers and the possible role of the WCF in this process. Six WCF funded films were screened in this year’s festival programme.

Openness, collaboration, and dialogue on equal terms: at Berlinale Talents, film personalities from the Berlinale programme and the juries — such as Charlotte Rampling, André Téchiné, David Lowery, James Schamus, Joanna Hogg, Guy Nattiv, Adina Pintilie, and Roberto Saviano — met to exchange ideas with 250 Talents and thousands of visitors. Especially this year’s Talents, who came from 77 countries, were thrilled to be able to find new impulses across borders for their work, and so to become part of the vast Berlinale Talents network.

On the subject of gender equality, the Berlinale 2019, expanded its evaluation survey — conducted since 2004 — on gender distribution in the Berlinale programme, and for the first time compiled a comprehensive dossier. During the Berlinale, Festival Director Dieter Kosslick also signed the “5050×2020” pledge, a commitment to work towards gender equality in both the festival and market.

This year, 17 films were competing in the official competition for the coveted Golden and Silver Bears. A diverse roster of international directors are competing for the awards that take centre stage at the Berlinale, includig Francois Ozon from France, Isabel Coixet from Spain, Agnieszka Holland from Poland and Zhang Yimou from China. Audiences are also eagerly looking forward to films by Wang Quan’an from China, who won the 2007 Golden Bear for Tuya’s Marriage, and Turkey’s Emin Alper, directors who have both been openly critical of their governments at home.

The forum programme presented 39 uncompromising films willing to take risks, including works focused around political and social justice issues that often employ unconventional cinematic forms. The 49th forum has a distinct literary bent, with many films based on the written word, and using verse or poems — for instance, The Children of the Dead from Austria, which is the experimental cinematic expression of the ghost novel by the same name by Nobel Laureate Elfriede Jelinek. Mother, I Am Suffocating. This is my last Film about You, a powerful black and white film about exile set in Lesotho and Berlin (“about people who live on the margins of a society that is new to them,” according to the director, Lemohang Jeremiah Mosese), will also feature.

The Panorama programme section also had even more films on its plate: 45 production from 38 countries will be presented over the next few days. According to the festival, this year’s Panorama offered a “controversial, political and challenging” programme with a large number of films about “people who try to leave behind systems of heteronomy and oppression.” This year, the section also featured many films by women and about women, with a focus on portraits of women artists from all parts of the world. Typical is the section opener, Jenna Bass’s Flatland, a contemporary coming-of-age western centred on three women in South Africa.

“Self-determined. Perspectives of Women Filmmakers” is the theme of this year’s Retrospective section of the Berlinale that attracts cinema-goers from all over the world. The 2019 edition is therefore showcasing some 26 feature and documentary films that were directed by women in both West and East Germany between 1968 and 1999. While the New German Cinema movement of the 1970s is often associated with male filmmakers like Rainer Werner Fassbinder, female Directors such as May Spils and Ula Stöckl were central to this inventive cinematic wave.  Forgotten female filmmakers who worked exclusively in the state-controlled DEFA studio system in East Germany will also feature in the 2019 Retrospective.

One of this edition’s achievements was for the audience to experience and learn about Scandinavian cinema. Hans Petter Moland’s adaptation of Per Petterson’s novel Out Stealing Horses received the Silver Bear for Outstanding Artistic Contribution for Rasmus Videbæk’s cinematography. The short animation Dad, directed by Atle S Blakseth and Einar Dunsæd, received a Special Mention from the international jury for the Generation Kplus competition.

Director and screenwriter Hans Petter Moland said that “after a week of fantastic response from the audience, a combined international press and critic corps, to get an award in Berlin – in competition with the utmost of international films – is the very top of it all.”

“Getting recognition for the cinematography on this movie means a lot to me. Not only is it based on my favourite novel of all time, but working with Hans Petter Moland on turning that book into cinema, was such a great experience,” he added.

In his film, the landscapes played an important role in Out Stealing Horses. The landscapes became like memories, where Hans Petter kept pushing for special images to achieve fulfilling experience.

Cinematographer Rasmus Videbæk said that “In the world of film there is nothing bigger than winning a prize at an A-festival like the Berlinale. It is an indisputable stamp of quality for Out Stealing Horses, the film we have worked so hard with for so long.”

The film’s visual qualities and the work of cinematographer Rasmus Videbæk was something several of the international trades highlighted in their reviews, where Sight & Sound praises the sense and close depiction of nature and landscape, Variety believes that Videbæk’s camera movement caresses the rural Norwegian landscape with so much tactile feeling that it contributes to the strong impression of nature’s influence on the protagonists, while Hollywood Reporter highlights the sensuality of the images as one of the film’s great qualities.

The film takes place in November 1999. Sixty-seven year-od Trond lives in new-found solitude and looks forward to spending the millennial New Year’s Eve  alone. As winter arrives, he discovers he has a neighbour, a man Trond knew back in 1948, the summer he turned 15 and the summer Trond’s father prepared him to carry the burden of his forthcoming betrayal and disappearance. And, the summer Trond grew up and smelled the scent of a woman he longed for. The same woman Trond’s father was preparing to spend his life with.

The novel Out Stealing Horses by Per Petterson was published in 2003 and has since sold almost 300,000 copies in Norway and around 870,000 internationally. On February 9, Hans Petter Moland’s film adaptation of the book premiered in the main competition at the Berlin International Film Festival. On March 5 it opens the Kosmorama film festival in Trondheim, Norwa,y and on March 8 it is ready for national premiere.