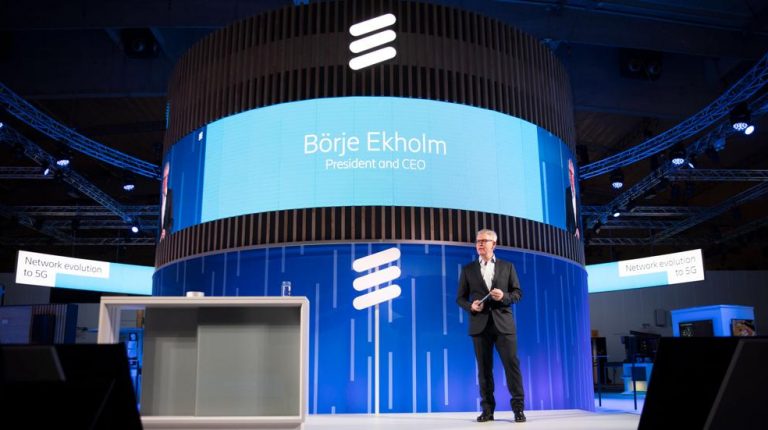 Barcelona- “We are truly switching to 5G in 2019; 5G technology will be the backbone of the future society,” said Ericsson CEO, Borje Ekholm, on Monday during Ericsson’s opening press conference at the 2019 Mobile World Congress (MWC19), which started on Monday and will last until 28 February.

“Ericsson made the decision two years ago and we had worked to bring it to realty,” he added, mentioning that the company has recruited 400 engineers in research and development (R&D) to pave the way for 5G.  “We invested $6bn in R&D during the last period.”

Ericsson will be adding around 4,000 skilled professionals in R&D, production, and sales based in more than 20 locations, including Germany, Romania, Mexico, and China.

“5G became a commercial reality and Ericsson is well prepared for the mission,” Ekholm stressed.

Addressing media and analysts as he launched Ericsson’s MWC, Ekholm pointed to the role of 5G as a critical national infrastructure and emphasised the advantages for early adopters.

Ekholm said Ericsson’s switching to 5G will be backed by a strong, secure, and available portfolio.

The CEO of Ericsson added that his company has announced commercial 5G deals with 10 named service provider customers, as well as 42 memorandums of understanding with more announcements to come.

The company is already rolling out 5G networks across the globe in the US, Europe, Asia, and Australia.  He also promised more announcements to come.

Answering a question by Daily News Egypt during the conference, Ekholm said they conducted a lot of discussions with some countries, including Egypt, adding, “I believe the Middle East will be an earlier adopter of 5G, but Egypt will be a little bit later. North America and China are taking the lead in 5G.”

Concerning the security of applying 5G, Ekholm said, “I can understand this concern, but we had established a good security system. It is up to nations to drive the national security of their countries, but investors and customers are worried and waiting for their decision,” he justified.

Ekholm explained that post production test will slow down the processes, and enterprises which will apply it will be less competitive. “Applying 5G helps enterprises to realise $600bn profit which translates to an increase of 50 or 60% in revenues. So they must accelerate to do it”.

“Consumers and enterprises are waiting for 5G,” Ekholm said, adding, “According to Ericsson ConsumerLab research, one-third of smartphone users globally will change either immediately or within six months to a service provider that offers 5G. Today, the US and Asia are leading in 5G development,” elaborated the CEO.

“5G would move the industry beyond consumer products and into industrial internet, citing ongoing collaborations in both mobile robotics and all-electric, autonomous vehicles as examples,” he proclaimed.

Ekholm also highlighted how Ericsson Radio System hardware has been 5G-ready since 2015 and can be used also for 5G New Radio (NR) with a remote software installation.

This means that Ericsson has already shipped more than 3m 5G-ready radios to its customers worldwide. “Ericsson’s unique spectrum-sharing capabilities and common core and dynamic orchestration solutions would put Ericsson customers in the lead with 5G,” he said.

“Our unique Ericsson spectrum-sharing is the most economically feasible way to introduce 5G in existing bands achieving immediate nationwide coverage,” he said. “We can dynamically mix 4G and 5G traffic on the same spectrum. Some said this kind of spectrum sharing was impossible. Wrong! Our engineers are truly world class. With spectrum-sharing, our customers have a real 5G frontrunner advantage,” he exclaimed.

Ekholm announced that Ericsson intends to acquire Kathrein’s antenna – a communication technology company – and filter business for mobile networks. This will expand the company’s capabilities and competences in advanced active and passive antenna domain.