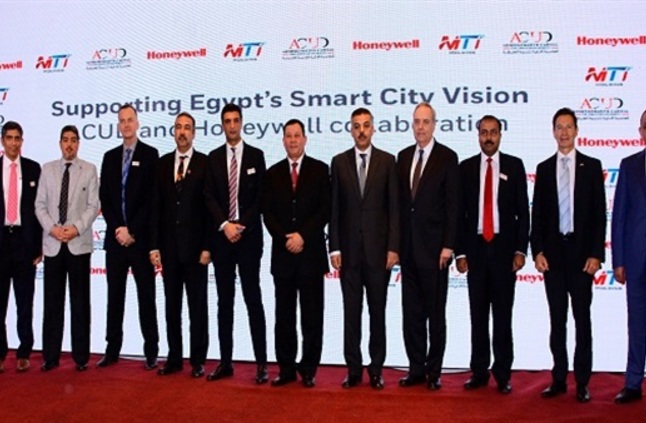 The company, which won the tender for the job last December, will install public surveillance cameras, posts, control systems, and other devices expected to be operational early 2020.

Over 6,000 cameras linked wirelessly to a command centre will “monitor crowds and traffic congestion, detect incidents of theft, observe suspicious people or objects, and trigger automated alarms in emergency situations,” according to Managing Director of ACUD, Mohamed Abdel Latif.

Abdel Latif said that emergency number 112 will be activated in the NAC, which will transfer the complaint immediately to the control centre, which in turn will take the appropriate measures by linking technology to various security authorities in the NAC.

For his part, president and CEO of Honeywell, Vimal Kapur, said that the NAC is a global standard for urban expansion based on innovation and sustainability, expecting that by 2030 Egypt will be an innovative country.

“We are proud to create a more sustainable society through providing security programmes in large buildings and security infrastructure, and we are undertaking a considerable responsibility toward innovating products and components that make the region successful,” elaborated Kapur.

Khaled Hashem, president of Honeywell Egypt and Libya, said that the NAC is a new city characterise by top security, supplied with integrated command control services.

Hashem said that the project is being implemented in collaboration with the ACUD and other local partners.

US Embassy Chargé d’Affaires, Thomas Goldberger, said, “Egypt’s growth encourages companies to launch business in the country. We are proud of this achievement and Honeywell is one of the best known companies in providing such technology.”

“We are impressed by Egypt’s big success in megaprojects especially in the NAC,” Goldberger noted.

Abdel Latif explained that the NAC’s government district will be equipped with high technology and sustainability, elaborating that the government district is scheduled to accommodate one million citizens during the coming period, where it is built on an area of ​​1.8m sqm, or equivalent to about 180,000 housing units.

Furthermore, he added that the NAC has achieved significant strides at the level of road projects and has so far completed the implementation of 700km of roads.

The ACUD managing director pointed out that the NAC is set to witness the establishment of modern technology centres in various fields and is preparing to receive new foreign investments.