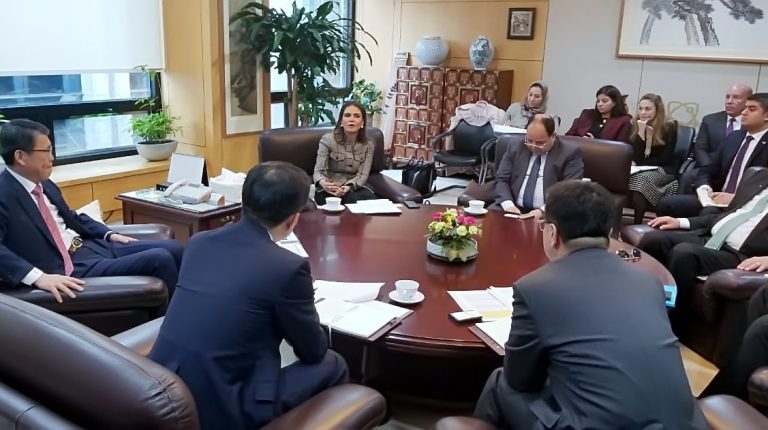 The Export-Import Bank of Korea (Eximbank) agreed to support Egypt’s SMEs sector in the next period during a meeting between the bank’s chairperson, Sung-Soo Eun, the Minister of Investment and International Cooperation (MIIC), Sahar Nasr, the Minister of Finance, Mohamed Moeit, and the Chairperson of the Suez Canal Authority and the Suez Canal Economic Zone (SCZone), Mohab Mamish, who visited Seoul on Monday.

Korea Eximbank’s future plans for supporting SMEs sector is an activation of a previous funding agreement reached during the President Abdel Fattah Al-Sisi’s latest visit to Korea in 2016, a statement by MIIC clarified.

A financing package of $3bn was announced during Al-Sisi’s visit in 2016. The package has two parts, the first includes $700m provided by the Economic Development Cooperation Fund with a low-interest loan and a long-term repayment period over 30 years. The rest of the funding is worth $2.3bn which will be used as export credit.

Egypt’s regulation reforms encourage the Korean firms to increase their businesses in the country, Korea Eximbank’s chairperson said, affirming the bank’s continuous support for Egypt over the next period.

The country’s megaprojects will offer new investment opportunities for Korean firms in the Suez Canal Area Development Project and the New Administrative Capital, he mentioned.

Egypt is keen on promoting the SMEs sector as it is a labour-intensive sector, Nasr said, pointing out that in August, she signed an agreement with the South Korean ambassador to Egypt, Yeocheol Yoon, in the presence of the Minister of Transport, Hisham Arafat. The agreement is worth $275m for the procurement and manufacturing of 32 air-conditioned trains for Cairo’s Metro Line 3.

Moeit showed Egypt’s successful reform experience and the achieved economic accomplishments, which positively reflected on Egypt’s credit rating. He also discussed the ways to promote the current cooperation aspects with Korea, including customs and taxes.

Mamish discussed with the Korean Eximbank’s representatives the bank’s support for automotive feeding industries at the SCZone, praising the bank’s activities in attracting investments to Egypt.

Following Korea Eximbank’s officials meeting, Nasr and Moeit met with representatives of Hyundai Engineering and Construction company, where both sides asserted the importance of the Egyptian market as one of the MENA’s largest markets.

The local market facilitates entering regional and global markets, and encourage investors to do business in Egypt, Hyundai officials said in a statement.

The statement also mentioned that a mission from Hyundai will visit Egypt next May for recognising new investment opportunities, adding that Nasr affirmed the Egyptian political leadership’s determination to expand the automotive sector’s investments.

Nasr and Moeit exposed Egypt’s investment incentives, and the available opportunities in the fields of infrastructure, energy, transport, automotive, affirming the economic condition’s improvement and the determination to continue the economic programme.

Moeit also affirmed that his ministry will adjust the Public Private Partnership Law to include several incentives in collaboration with the Parliament.