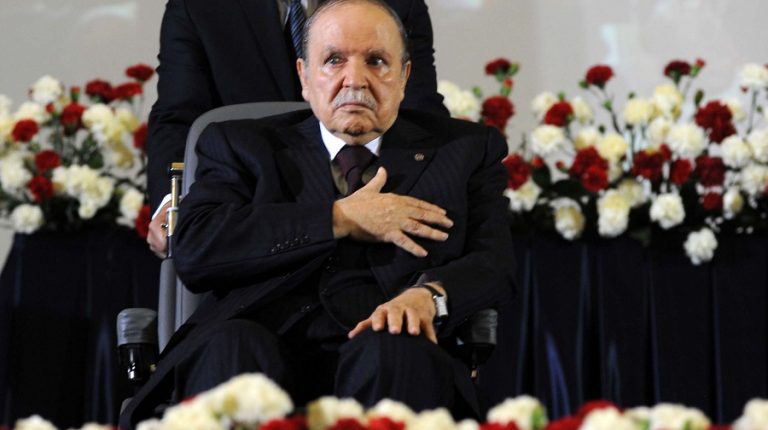 Protesters chanting “No for Bouteflika” and “No for fifth term” spread across different Algerian cities over the last week against President Abdelaziz Bouteflika’s bid for a fifth term despite his deteriorating health condition.

The protesters also chanted against Saeed Bouteflika, the younger brother of the Algerian president, who acts currently as his adviser, as well as the Prime Minister Ahmed Ouyahia and called for his dismissal.

Commenting on the controversy sparked by Bouteflika’s announcement in the country and prompted Algerians to take to the streets, Ouyahia said on Monday that “ballots” would determine the fate of Bouteflika’s fifth term.

“We can confirm that the presidential election is the suitable tool by which the people can choose who fits the position and reject whoever they do not want,’ he added. 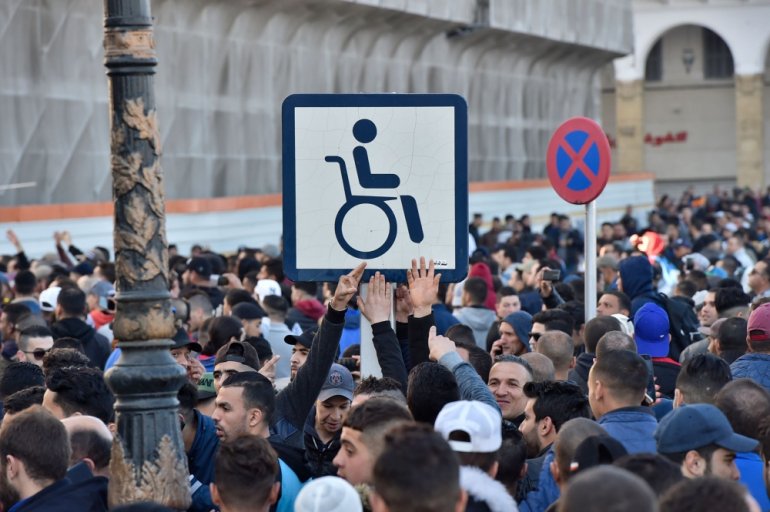 Earlier in February, President Bouteflika announced his intention to run for a fifth term in the upcoming elections scheduled in April.

“Of course, my physical strength is no longer the same as it was in the past. This is something that I have never hidden from the people, but, my intense desire to serve the country has never faded,” said Bouteflika in a letter.

His statement did not convince many of his people, prompting them to stage public protests. Moreover, the Algerian opposition said there is no evidence that Bouteflika’s health condition can enable him to lead the country, noting that Algeria is ruled now by the president’s advisers. Meanwhile, the state authorities affirmed they control the situation, despite Bouteflika’s rare public appearances.

Bouteflika, who was recently wheelchaired, has been ruling Algeria since 1999. He always address the people via video conference, and rarely seen in public after suffering a brain stroke in 2013.

Last Thursday, Algerian authorities announced that the president, 82, will travel to Switzerland on Sunday for medical checks.

The demonstrations, led mainly by youth, marched to the presidential palace, but were dispersed by security forces using teargas, and the protesters responded by throwing stones at the forces.

These protests were the largest in Algeria since 2001. Despite intensive security measures in Algiers, but calls to protest against Bouteflika’s presidential candidacy succeeded to attract thousands of citizens after opposition political parties called for marches outside the capital. Security forces have been actively restricting the movements of the protesters, blocking their roads, and dispersing gatherings.

The demonstrators filled the capital, in addition to at least five other cities, including Oran, Tizi Ouzou, Bejaia, Annaba, and Setif.

In June 2018, a national movement was established to oppose Bouteflika’s bid for fifth term, including groups of intellectuals, opposition parties, activists, journalists, and lawyers. 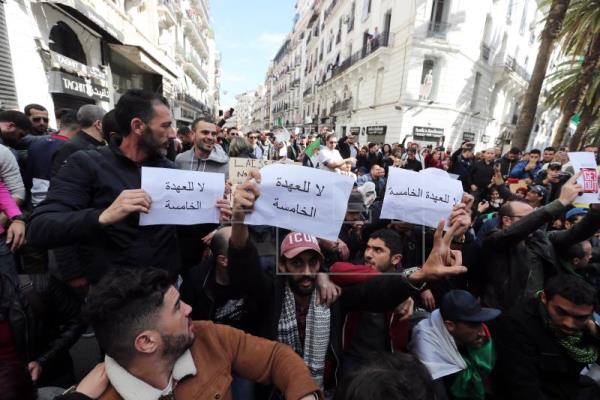 The protests spread across the country and with continuous coverage on social media platforms, despite previous warning by preachers during Friday prayers of violence. A total of 41 protesters were detained last Friday, according to the state news agency APS.

Anti-Bouteflika protests were also reported in Paris, as hundreds from the Algerian diaspora gathered in solidarity with demonstrators in the home country.

Meanwhile, other Algerian people believe that Bouteflika still has the ability to rule the country.

The National Liberation Front (FLN), which has the parliamentary majority, the National Rally for Democracy (NDA), led by the prime minister, and other parties as well as labour unions supported Bouteflika in the election.

Observers expect Bouteflika to win the presidency for the fifth time being supported by two major parties amid the division of opposition.

The Rally for Algerian Hope Party warned against “terrorism and foreign interference” following the Friday protests.

The retired military general, Ali Ghadiri, 64, was the first to announce his candidacy for the Algerian presidential election.

In the upcoming election, the Movement for the Society of Peace nominated its leader, Abdul Razzaq Mikri, to run for the president, Mikri said previously that Bouteflika’s deteriorating health condition would not allow him to perform his duties.

Journalists working in state media outlets denounced their editor-in-chiefs’ orders not to cover the marches.

Moreover, the Head of the Algeria’s state-owned public radio on Saturday resigned from her post for not being able to cover the Friday demonstrations.

Government television channels and radio stations also ignored rallies and protests in which thousands participated in different parts of the country, especially in Algiers, where all the media outlets are based.

The Western countries’ position from Bouteflika’s bid for a fifth term and protests was not clear, except the US State Department that issued a warning over the demonstrations. Also, no comment has been issued by the European Union or any member states on the demonstrations in Algeria.

Algeria has joined the latest wave of collective dissent that started late 2018 in Tunisia and Sudan. Algeria is a major gas supplier to Europe and a US ally in the war against Islamic militants in the Sahel region of North Africa. Strikes and protests over social and economic grievances are frequent in Algeria, but have generally been localised, rather than touching on national politics.

A study conducted by the International Crisis Group in November 2018 warned that Algeria could face an economic crisis by 2019, if immediate economic reforms were not carried out.

Algeria decided at the end of 2017 to replace external borrowing with internal loans from the Central Bank of Alegria to fill the budget deficit over five years, which experts considered an open door to increase inflation.

“In the absence of reforms, an economic crisis could hit the country by 2019, fuelling the tension surrounding the upcoming presidential election,” the study said. Also, more than a quarter of Algerians are under the age of 30 and unemployed, according to official figures. Many people feel discontent with an oligarchy made up of veteran fighters from Algeria’s 1954-62 independence war with France.

There was a major street unrest in Algeria during the 2011 Arab uprisings that toppled the rulers of North African neighbours Egypt, Libya and Tunisia. But the Algerian security forces managed to contain it. Meanwhile, the economy of Algerian was severely affected due to lower oil prices.

Throughout the 2000s, Bouteflika’s government embarked on an ambitious investment drive to build the economy off the back of the country’s large oil and gas revenue and mineral resources. However, after 20 years in power and with a country still heavily reliant on natural resources, many have accused the government of corruption, nepotism, and failing to ensure the boom years improved the lives of ordinary people.

Algerians have bitter memories of a decade of civil war in the 1990s in which 200,000 people were killed. The war was triggered after the army cancelled an election that Islamists were poised to win in 1991.