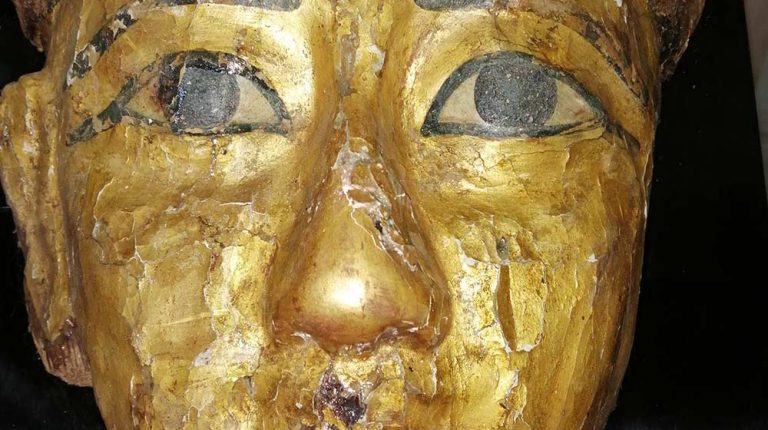 The Egyptian Museum in Tahrir announced that an ancient gilded mask and a funerary relief that were never displayed in public before will be showcased at the museum’s entrance hall this week. The gilded mask was a gift from an Egyptian citizen living in France, Sabah Abdel Razik, the director of the Egyptian Museum and the head of the museums sector at the Ministry of Antiquities, said.

She added that the mask was restored like other artefacts before display.

As for the funerary relief, it depicts a family of four members. The relief was discovered in El-Assasif, a necropolis in Upper Egypt, during the excavation work of Metropolitan Museum in 1915.

It features a man called “Neith-Ptah” and a woman believed to be his wife standing behind him, with two children. Inscriptions on the relief state that the depicted boy and girl are Neith-Ptah’s children.

Carvings on the relief read: the family was offered giving from the God Patah-Seker.

Minister of Antiquities, Khaled Anany, previously stated that there are thousands of monuments that have never been displayed in public before will replace other monuments that were moved to the GEM, stressing that the museum’s stores are full of artefacts that were not spotlighted before.

The announcement came a day after the Egyptian Museum announced it received remains of two mummies that the Egyptian authorities foiled smuggling them outside the country.

The Ministry of Antiquities announced on Sunday that two mummies were found with a passenger who was travelling to Belgium from the Cairo International Airport.

The seized mummy remains included hands, legs, and parts of one of the mummy’s chest. The parts were reported to be found with linen wraps and parts of the mummification resin.

The passenger’s bags were detected by X-ray which showed something unusual inside a music speaker. They were detected to be remains of a mummy, and a committee from the ministry confirmed they belong to an ancient mummy.

The era those mummies belong to was not determined yet. Nonetheless, the parts will be examined and restored once they arrive in the Egyptian Museum.