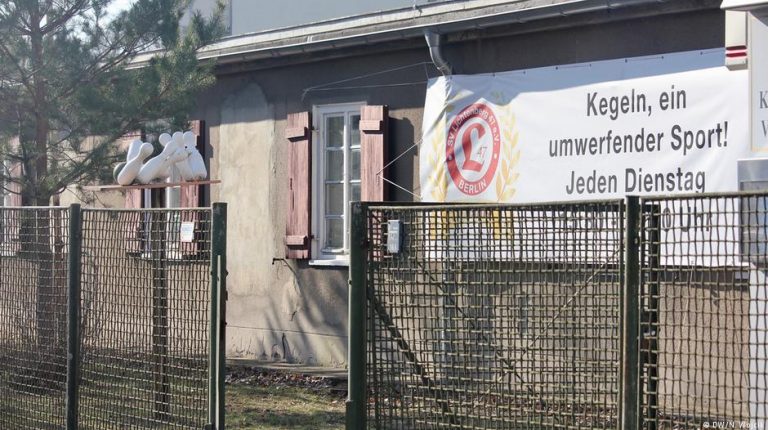 A sausage museum at a former concentration camp? Those plans are now on ice. But can memorial spaces coexist with everyday life? Former barracks in Berlin’s suburbs show how these spaces of remembrance are shared."It's nice and bright on the side looking out onto the garden; we now have new, large windows. That's what we'd like to get in the front too," says Birgit Kroll, director of the Kindergarten Sonnenstrahl, where 50 children are looked after during the day. As she leads us through the colorful rooms filled with playing kids, nothing suggests that this was a space where forced laborers were kept under the Nazis, more than 70 years ago.

The small windows on the front side are, however, there to stay, according to memorial protection orders. Birgit Kroll also mentions other architectural difficulties related to the renovation of the roof and thermal insulation.

The kindergarten director focuses on the daily tasks at hand, on the children — yet she is well aware of the history of the building: "When you're alone here on an early shift, it's a bit strange."

The Sonnenstrahl Kindergarten belongs to a barrack ensemble from 1943 that was built as a Nazi forced labor camp in the middle of a residential area in Berlin's Schöneweide district.

Half a million forced laborers in Berlin

It is one of the estimated 3,000 collective accommodation spaces for forced laborers that were built in the German capital — and the only one that has survived to this day.

The 13 barracks here were made of stone instead of the usual wood, which is how they survived World War II and the later turmoil of divided Berlin during the Cold War.

The buildings therefore provide a rare memorial to the around 500,000 Nazi forced laborers who were exploited in Berlin.

Although around 13 million people were brought into to the German Reich for forced labor — including civilian forced laborers, prisoners of war, convicts and concentration camp prisoners — they are still a "forgotten group of victims" today, says Christine Glauning, the director of the Nazi Forced Labor Documentation Center, which is now housed in six of the Schöneweide barracks.

"Forced labor was visible, a public crime," adds the historian. Most of the forced laborers were led in columns to the factories, workshops, factories, cemeteries or even to private households where they were exploited, so the civil population was necessarily aware of their existence.

The first permanent exhibition, which opened in one of the barracks in 2013, is therefore called "Forced Labor in the Daily Round 1938-1945."

Multimedia installations, combining private photos and recent video interviews, tell the stories of different victims, such as the Polish woman Genowefa Czub, who was taken from the concentration camp in Auschwitz to work as a forced laborer in Berlin; the Russian Nikolai Fedorowitsch Galuschkow, who was only 15 years old when he started to work as a gravedigger in cemetery; the Ukrainian Sinaida Baschlai, who was deported to Berlin in 1942 and had to work as the maid of a flight officer.

A memorial among various businesses

One half of the barracks has been turned into a public documentation center; it was a space that used to be a vaccination institute under the GDR. The other buildings have been rented out or privately owned since East German times; along with the kindergarten, there's a physiotherapy center, a sauna, a car dealership and a bowling club.

After visiting the exhibition at the documentation center, you wonder how anyone would want to go the sauna in one of the other barracks, just across the street, knowing that it's the exact location where forced laborers had to freeze in the winter. How could anyone want to buy a car where people used to be exploited in metalworking companies? Or enjoy a game of bowling in a former location of suffering?

A sausage museum, selfies and picnics

"I find it interesting," says Christine Glauning, referring to the current discussion surrounding what may and what may not be done in such historical locations. The most recent controversy came in Thuringen, when investors planned to extend a sausage museum in an annex of the Buchenwald concentration camp. Following public outrage, another location was found.

While historian Christine Glauning is not necessarily against all new uses for places of remembrance, she says she was clearly opposed to one project that would have set up a refugee shelter in a former barrack of a concentration camp. "I think that is simply wrong," she says. After the end of World War II, German refugees and prisoners of war were partly accommodated in former concentration camps.

In the center of Berlin, too, there are often discussions surrounding the way tourists approach the Monument to the Murdered Jews of Europe. In reaction to their inappropriate selfies, Israeli artist Shahak Shapira launched the "Yolocaust" art project, in which he used their shots, and edited them onto photos of mass graves of murdered Jews.

Peter Eisenman, the architect of the field of stelae isn't as strict about the way people should approach the monument. In an interview with Spiegel Online, he once said that the monument was not a "holy place." "People will have a picnic there. Children will play catch there. There will be models posing there and films will be made there."

A search for collective memory

Birgit Kroll wanted to colorfully decorate the wall along their Kindergarten yard with the children — a creative project she was excited about. "But no, the preservation order didn't allow us to do it," she sighs. "That's just the way it is."

Has she ever visited the documentation center? No, she admits: "I'm very interested in history, but I'm always very emotional about it. My grandfather was a prisoner of war himself."

Christine Glauning, who has also previously worked in other Nazi memorial sites, has often observed this: "It's better to go further away than to visit the memorial right in front of your door." It shakes a person's identity to combine feelings of home and security with a location of cruelty and humiliation, she explains.

The indifference surrounding the barracks in Berlin-Schöneweide nevertheless remains surprising for visitors. The current tenants appear to be more irritated by the fact that the barracks are now protected historical monuments than their previous history. Should the barrack that has been a garage for decades be painted in the same bleak color as the documentation center? Should restoration that would improve the children's situation in the kindergarten also be restricted?

"Memorials should irritate," says Glauning. Remembrance happens when the difficult aspects of history rub against the present.