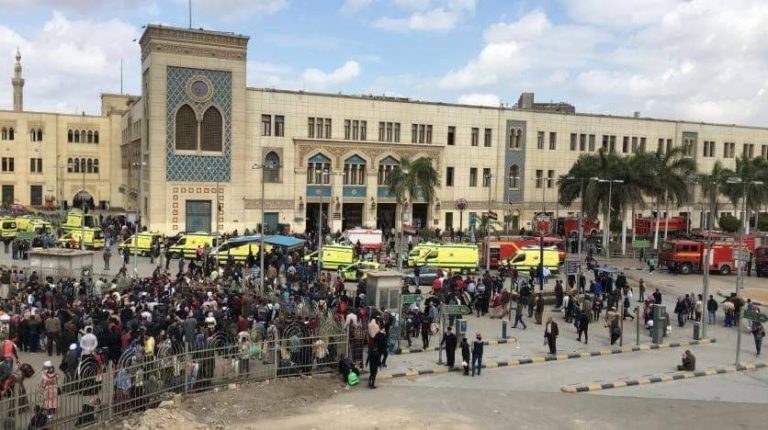 In an interview with local media, the Minister of Health, Hala Zayed, stated that all the injured individuals were transferred from downtown hospitals to the Nasser Institute’s and Dar El-Shefaa hospital’s emergency departments in order to receive the required medical treatment, adding that some of the injured are in a critical state.

Some of the injured individuals were transported to the Red Crescent (Al-Helal) hospital in Ramsis. DNA samples are being collected from the accident’s scene in order to identify the victims.

During a press conference with his Albanian counterpart, President Abdel Fattah Al-Sisi offered condolences to the families and relatives of the victims affected by the incident. He added that he has ordered the cabinet to hold all who is responsible for the accident accountable.

Prime Minister Mostafa Madbouly visited the Ramsis Station. He said that the life of every Egyptian is valuable to him and to the state. He added that anyone who is responsible for the incident will be held to accountability.

The Prosecutor General, Nabil Sadek, ordered an urgent investigation into the incident in order to clarify the reasons behind the explosion. Moreover, the train’s driver was arrested.

Following the fire outbreak, the Minister of Transportation, Hesham Arafat, has resigned, and Madbouly accepted his resignation. Before the resignation, Arafat issued a statement stating that that his ministry formed a technical committee to investigate the accident and prepare a technical report on the causes of the fuel tank explosion.

Egypt’s Railway Stations Authority said in a statement that the fuel tank of the locomotive has exploded after colliding with a concrete buffer stop, causing a huge fire which resulted in the casualties. Flames of the fire engulfed the platforms and the nearby buildings.

Shortly after the incident, the ministry of transport briefly halted all the railway activities at the station, before resuming them again after a short time, but halted it on pavement number 6 which witnessed the incident.

Several images were circulated on social media showing heavy plumes of black smoke rising from the station. It also showed people running while they are burning.

The train was at the maintenance workshop before it entered the station at a very high speed, without a driver to control it. The station is five kilometres far from the workshop.

Train accidents are frequent in Egypt, which has one of the largest and oldest railway roads in the Middle East. Egypt’s railways have suffered for a long time from lacking safety standards throughout successive governments.

According to an official statement by the Egyptian National Railways and the Central Agency for Public Mobilisation and Statistics (CAPMAS) in 2017,12,326 rail accidents took place from 2006 to 2017. The CAPMAS added that there were 1,793 train accidents in 2017 only.

The country witnessed several train crashes in the last 20 years, resulting in hundreds of casualties, while the last accident happened in July 2018 in Badrashin in Giza, when the ministry of transport stated that the train track’s need for maintenance and renewal was the reason behind the accident.

Following the Badrashin’s accident, the ministry of transport said that its plan for development includes importing 1,300 modern railcars, 100 modern locomotives in 2019, developing 18 locomotives since November 2018, and providing spare parts at the cost of $575m. The process of development is supported by the European Bank for Reconstruction and Development.

The deadliest train accident happened in February 2002 when at least 373 people were killed when fire swept through an overcrowded train near Al-Ayyat in Giza. The train was taking Egyptians home for Eid Al-Adha.

In Cartoon: Extract of Ramsis II statue in Matariya

In Pictures: A fire has broken out on the third floor of a building located on Ramsis Street