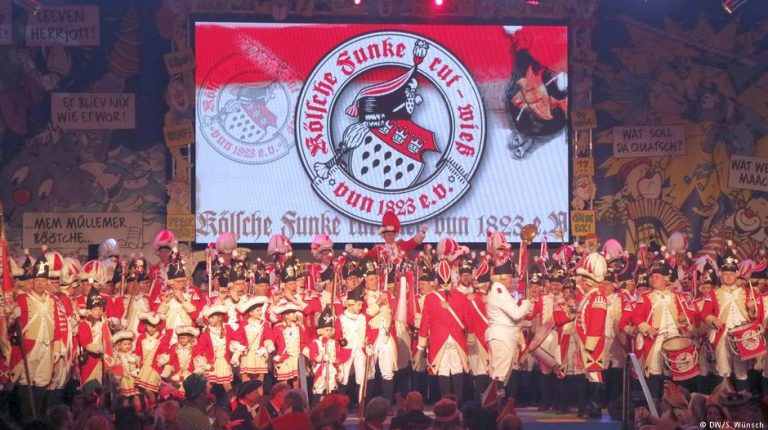 Inspired by Cologne’s city soldiers, the Rote Funken guard goes way back to the 18th century. DW’s Silke Wünsch takes a closer look at this traditional Carnival group of the party-hardy.Being a member of Cologne's traditional Carnival association, the Rote Funken, requires three essential things: being a man, having good connections in the city, and having a knack at putting away substantial amounts of beer and schnapps without embarrassing himself or the club.

Also, he should demonstrate that he has worked very hard to become part of this illustrious group, since it's not just anyone who is accepted. Oh, no, he has to have the right family, friends and connections to enter the society. Also, he has to have at least three "guarantors" who attest to his suitability; then, he can apply for admission. "That can take up to three or four years," said Günter Ebert, spokesperson for the Rote Funken. "And it doesn't matter if you are on the board of directors of a major company or a craftsman. Money is not what gives you entry into the club," he added.

Carnival kicks off in November

Carnival actually kicks off on November 11, but the Rote Funken begin even earlier. On November 1, All Saints' Day, they pay a visit to their deceased loved one at Cologne's time-honored Melaten Cemetery.

Then, on November 11, they gather at Cologne's Old City to boast their talents: with 450 members, a band and orchestra getting crowds into a Carnival party mood and moderators inviting Cologne dialect bands up on stage.

Things quiet down again through the Christmas season, but then things really get going with the start of the new year, with the Rote Funken appearing at countless Carnival shows throughout the city in the run-up to the six-day Carnival celebration normally starting in February.

The Rote Funken don't just work hard to keep the Carnival tradition alive, they also consider themselves a non-profit association with a commitment to society. They help to support disadvantaged people, for instance. Last December, the club hosted a mass in the Cologne dialect, with the collection of some €12,000 ($13,700) going to an association that helps the poor and homeless.

They also organize Carnival shows for handicapped people, as well as walk through the city collecting donations for specials group. This year, it has been for a project that aids some 1,500 homeless women in the city.

The Rote Funken certainly reel in the proceeds, as they easily attract with their bright red and white costumes and musical band. Tourists especially like to have their pictures taken with them. On one weekend alone, members collected around €11,000 for the charity.

A long way back

The Rote Funken are composed of more than 600 members divided into four groups called Knubbel, who meet throughout the year in pubs. Each Knubbel has its own characteristics and symbols that refer to history of the old city soldiers, the Stadtsoldaten. They include a red-and-white knitted sock, an onion, a spinning top, and a cork.

They symbolize that, in times of peace, the city soldiers did various things to earn extra money, like knitting socks for other people, doing household chores like chopping vegetables and cooking, and taking care of kids and having them play with toy tops. The cork is a reminder that, with little else to do, the former soldiers would spend their time drinking.

The city soldiers: a laughingstock

Back then, in the late 18th century, the city soldiers did not enjoy much of a good reputation. They were supposed to protect the city, but from whom? The city's walls were sturdy and well-guarded.

The city soldiers were thus more of feckless day laborers who were paid poorly and had to take on side jobs like knitting and tending to children. They became the mockery of Cologne's citizens. With their penchant for drinking out of boredom, when the French marched into town in 1794, the city soldiers were completely useless and took to their heels.

Then, in 1823, a few important men sat down together and decided to establish the Rote Funken club, with the aim of giving shape to the wild Carnival from back then.

A newspaper article on February 14, 1824 reported that several friends had united as a "walking guard in honor of our hero Carnival." Thus the Rote Funken marched in the first Rose Monday parade ever, wearing uniforms just like the old city soldiers. The Rote Funken remain true to that tradition to this day, with contemporary suits being tailor-fit and running up to €1,500 a piece, said Ebert.

But if you're searching for women donning a Rote Funken uniform, you'll do so in vain. There is only one, and she is an honorary member. It's Henriette Reker, Cologne's Lord Mayor, as every mayor becomes a Rote Funken honorary.

"We're the last group to be discriminating toward women," said Ebert. Still, there are historical reasons for the nearly male-only policy: There was only one woman among the old city soldiers and that was the sutler. And she did not enjoy a very good reputation. She was responsible for the amusement of the men. That's why, nowadays, the Funken have their "Marie" — the female dancer of the guards. Interestingly, the "Marie" role used to be taken up by a man, until the Nazis asserted that a woman take on the position.