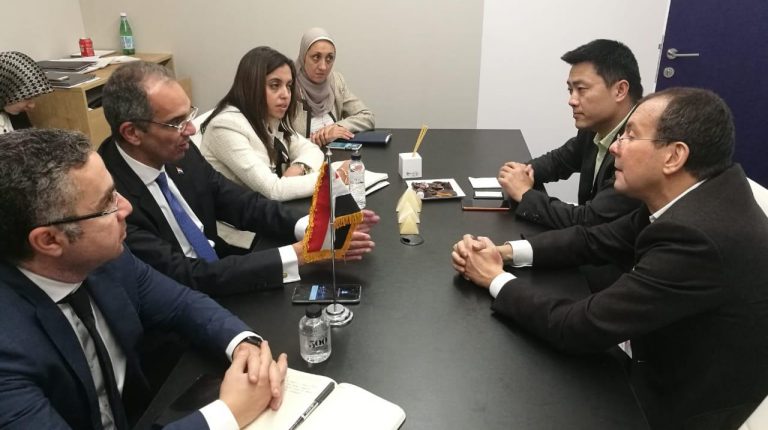 The meeting was part of Talaat’s participation at the World Mobile Congress (WMC) 2019 in Barcelona.

They also discussed means of boosting the company’s investments in Egypt, as the global company aims to participate in the manufacture of tablets for schools. These tablets are to be used in the context of developing the school system using information technology and by increasing the product’s local components by at least 50%.

He also met with J. Nathan Vince, president of power solutions at Flextronics International Group, to discuss the expansion of the company’s operations in Egypt by doubling the size of its global position in the Egyptian market in the field of software and integrated systems, as well as increasing the number of employees.

Moreover, Talaat met with Phil Davis, chairperson of the board of directors of HPE International, to discuss cooperation opportunities with the company such as establishing a centre for transferring digital knowledge in Egypt in the field of emerging technologies, including Artificial Intelligence (AI), Internet of Things (IoT), and blockchain technology. They also discussed the possibility of establishing a technical support centre for the company in Egypt in order to serve its customers in the Gulf and the Levant region.

The minister also met with a delegation from Lenovo International, headed by Yao Li, vice president of the company for Lenovo Tablet & Smart device, to discuss the company’s investment opportunities in Egypt in tablet and mobile manufacturing, especially with increasing demand. Talaat reviewed the investment opportunities available in the information and communications technology (ICT) sector, especially in view of the major national projects being implemented in Egypt. This is in addition to the expansion of the establishment of smart cities and large infrastructure projects that require a significant supply of electronic devices such as IoT sensors, servers, control devices and systems, desktop computers, laptops, networking equipment, and tablets.

Furthermore, Talaat also met with Mats Grand, general manager and board member of the GSMA International, and his delegation to discuss Egypt’s proposal to host the GSMA’s Mobile 360 conference in 2020/21. The conference is an international platform to discuss issues related to the global mobile industry. It involves a large number of decision-makers and industry executives around the world.

During the meeting, they reviewed the most important characteristics that distinguish Egypt which qualifies it to host this considerable international event. He also mentioned Egypt’s interest in the developing the ICT industry in particular, as it seeks to move toward achieving digitisation and use 5G, in addition to achieving a breakthrough in the field of e-commerce. This is particularly true given the presence of other competitive advantages unique to Egypt, especially the passage of a wide network of marine cables in its territory, and qualified human cadres at the highest level in the communications and information technology fields, which benefit major international companies operating in the sector in exporting services, for all its customers worldwide, in different languages, to meet their needs in local and global markets.

Sharing technologies on the information highway