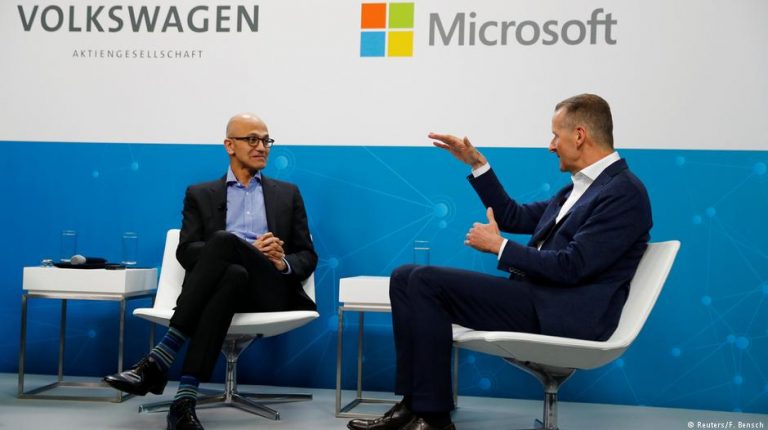 The car industry is going through profound change. Volkswagen appears to understand the scale of this better than most, and its collaboration with Microsoft is part of its attempt to rebrand itself for the future.Many cinematic and literary visions of the future have portrayed us driving in the clouds. A good example is the film Blade Runner, made in 1982 but fittingly set in 2019, where driving takes place in cars that glide through the skies.

Here in the real 2019, it turns out that sooner or later, we will be driving in a cloud after all — specifically speaking, the Volkswagen Automotive Cloud. At least that's the vision that was sold at a slick press event on Wednesday in the German capital.

The Berlin district of Friedrichshain, politically one of the most left-wing in the country, is not one you would readily associate with corporate powwows between captains of industry.

Yet taking place on the banks of the river Spree was an event labeled as a "CEO Fireside Chat" between Herbert Diess, CEO of Volkswagen, and Satya Nadella, CEO of Microsoft. Needless to say, there wasn't a fireside in sight in the decidedly chill, sharp-edged surrounds of the Volkswagen Digital Lab.

AI, you can drive my car

Last September, Volkswagen and Microsoft announced a partnership to develop an integrated "automotive cloud” which would, in the words of Diess, "turbocharge our digital transformation."

Since the Dieselgate scandal in 2015, Volkswagen and the automotive industry as a whole has been grappling with profound change. On one hand, there's the transformational rush to electromobility; on the other, the all-encompassing digitalization of driving, from Internet of Things (IoT) connections to the ultimate leap forward, looming ever closer on the horizon — autonomous driving.

"I have not seen in my professional life an industry go through the transition the auto industry is going through right now," was Nadella's verdict.

Eager to cast off the dirty stains of Dieselgate as soon as possible, Volkswagen has heartily embraced this digital revolution and has committed to investing dizzyingly large sums of money to that end. The Microsoft link-up is a big part of it, with the idea being to develop its own overarching digital ecosystem to cater for the hi-tech revolution that apparently awaits us all on the road ahead.

The headline news announced on Wednesday is that Volkswagen and Microsoft are extending the cloud project from Europe to the car group's other key markets around the world, namely China and North America.

But the bigger picture is the huge gear shift Volkswagen and the car industry is going through, summed up succinctly by Diess when he said the strategic partnership with Microsoft was central to Volkswagen's efforts to develop itself into "a software-driven mobility provider." And you thought they just made cars.

The presence of Nadella at Wednesday's event was an illustration of how potentially valuable the collaboration is for Microsoft as well, with the American tech giant clearly unperturbed by any negative association with VW which may linger in the US after Dieselgate.

Microsoft is also involved in digital collaborations with BMW and Daimler. With the likes of Google and Apple already invested in the car industry, the original US tech kingpin is clearly trying to get in on the digital ground floor with the German auto industry as a whole.

"Digital technology is rapidly changing every aspect of the auto industry, from the manufacturing process to the car itself," said Nadella. "Our partnership will enable Volkswagen to deliver new Azure-based connected vehicle services that accelerate the company's transformation into a software-driven mobility provider and define the future of mobility for people everywhere."

That Azure tech is what VW is banking on. The cloud computing service has extensive artificial intelligence and IoT capabilities — critical tools for the digital future that carmakers like VW see as inevitable.

Yet, given that German and European roads are still clogged up with old-fashioned gas guzzlers, many of which still count internal CD players as the pinnacle of their hi-tech extras, it's sometimes hard to visualize what exactly this brave new automotive future will look and feel like.

Diess says that while he firmly believes autonomous driving is inevitable, he is still a bit "conservative" about it. "There is still a lot to do," he says. But what he does envisage in the very near future is a world of software-focused cars, fully connected to the internet, sharing and receiving data with the cloud.

"Think of it like your smartphone, except that it will be at least 100 times more powerful," he said. Nadella's description of cars in this connected future is that they will be "data centers on four wheels."

The idea is that new Volkswagen cars will be built with software that provides "digital added-value services for our customers," said Christian Senger, the VW board member who will have responsibility for the automotive cloud. Think of it like sitting into your car whereby turning the key in the ignition will effectively be like turning on your smartphone – just another form of logging on to an online platform that already knows a lot about you.

Just to show that this is not all just head in the clouds stuff, Volkswagen will launch their ID. model car next year, the first vehicle generation which will be connected to the cloud. The ID. will be launched in Europe first, and then in China and North America.

Dieselgate in the rear view mirror

One certainly can't accuse Volkswagen of not being prepared for the future. Yet the elephant in the room on Wednesday was Dieselgate. It is barely three years since it was revealed that VW had installed cheating devices in 11 million of its vehicles worldwide, allowing it to dishonestly beat emissions checks and spew out far more hazardous nitrogen oxides (NOx) than it was legally allowed to.

Events such as the one on in Berlin underline just how much distance the German car giant has put between itself and the scandal, albeit with German courts yet to begin hearings on the lawsuits filed against the company.

If the company has been able to achieve that, it's not hard to conceive that its digital revolution being trumpeted on the banks of the Spree will sooner or later become a reality.