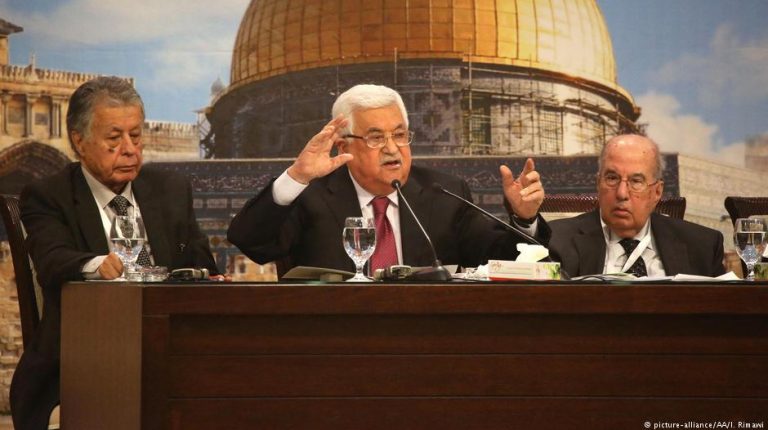 The Palestinian arena has witnessed a political split since 2007 between the movements of Hamas and Fatah. Several parties, primarily Egypt, have tried to contain the Palestinian socio-political fabric and bring about a reconciliation. But so far, the two sides have not agreed on several outstanding issues.

The Russian Foreign Ministry has called on 10 Palestinian factions to meet in Moscow to discuss ways to end the division and restore the lost national unity. The meetings ended with the signing of a joint declaration by all factions except Jihad. Yet, Fath and Hamas returned without agreeing on anything, rejecting what is known as the ‘American Deal of the Century’.

After returning from Moscow, electronic campaigns were launched against the Palestinian President Mahmoud Abbas and his supporters.

The so-called Popular Movement for National Salvation called on citizens throughout Palestine, especially the Gaza Strip, to take part in demonstrations on 21 February to demand the departure of President Mahmoud Abbas.

The demonstrators gathered in Saraya square in the centre of Gaza City to participate in the demonstrations which drew supporters from all areas of the Gaza Strip. The crowd gathered up and waved banners calling for Abbas to leave, chanting slogans against the punitive measures taken by the president of the Palestinian Authority (PA) toward the residents of the Gaza Strip.

The Palestinian Fatah movement held a march on Sunday in support of the Palestinian President Mahmoud Abbas, ‘Abu Mazen’, in the West Bank town of Jenin, in the northern occupied West Bank. A campaign named ‘We Choose You’ was launched.

In a special statement to the Daily News Egypt, Yosr Al-Atrash, the campaign’s spokesperson, said that the ‘We Choose You’ campaign aims to prove the Palestinian popular stranglehold on the leadership, represented by President Mahmoud Abbas, and to support him in the face of the campaigns calling for his removal, whose leader remains unknown, as Palestinian organisations in Gaza announced that they do not participate in it. “We accuse regional bodies, especially Israel, of inciting against President Abu Mazen by employing some elements on social networking sites to serve this purpose because of the leadership’s efforts to face the deal of the century.”

Al-Atrash noted that the campaign has been met with great resonance and interaction well exceeding expectations on the Palestinian, Arab, and international levels, where Arab and international media started shedding light on them, their causes, consequences and the great circumnavigation around them.

She said her campaign was able, in a short time, to overwhelm the campaign calling for Abbas’s removal.

Moreover, she said that, at the internal Palestinian level, the campaign has received widespread interaction in which all Palestinians, including children, youth, women, seniors and all categories of people, graduates, workers, artists, and employees participated.

This is in addition to the active participation of members of the Palestinian communities in the countries of the world, the Palestinian diaspora, and refugees everywhere.

She explained that there are Palestinian factions that support the campaign while others are neutral, such as Islamic organisations.

“We are now announcing the end of the first phase of our campaign, following the achievement of the full objectives set for it and there are future stages are to be announced later.”

Furthermore, she expected wide participation in the coming stages, especially at the Arab and international levels in order to support President Mahmoud Abbas in his efforts to achieve the dream of an independent Palestinian state with Jerusalem as its capital.

This comes amidst mutual arrests between the West Bank and the Gaza Strip, where Fatah announced that the Hamas security services in Gaza had arrested dozens of first-rank leaders and a number of members of the movement in a move aimed at silencing the support of Palestinian President Mahmoud Abbas and the Palestinian Liberation Organisation (PLO), while Hamas accuses the PA of arresting dozens of its members in the West Bank.

In the same context, the Palestinian National Council called on Hamas to assume national responsibility and stop acts that lead to the ‘Palestinian strife,’ and cause great harm to the entire national cause, in reference to “attempts by some in the Gaza Strip to undermine the legitimacy of President Mahmoud Abbas.”

The council added that these acts are “outrageous, childish, and irresponsible. It is regrettable that Hamas figures are clearly involved in this.”

Over and above, the council stressed in a press statement on Monday that this deliberate move cannot be accepted in any way. “It aims to consolidate the division caused by Hamas in its 2007 coup, calling for sedition, hatred, and further chaos in the Palestinian march, particularly in the Gaza Strip, because of these irresponsible actions.”

It called to stop all that would harm the national unity, and to have opposing opinions and political differences on PLO and legitimacy grounds, and that the free ballot box would be the referee.