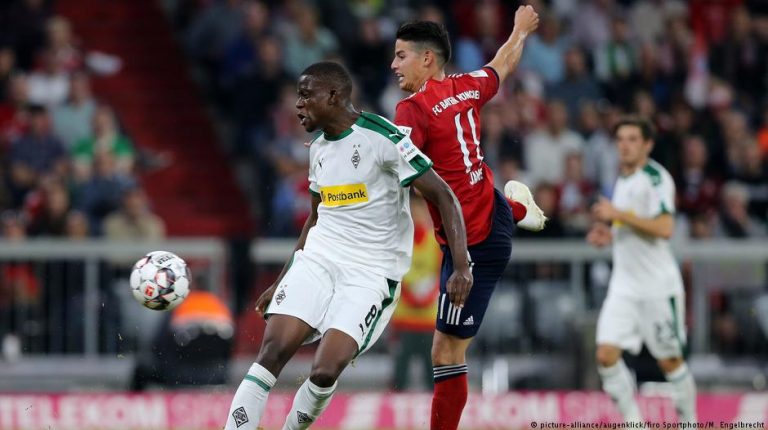 Bayern Munich’s future remains a hot topic, but their focus at present is staying hot on the heels of league leaders Dortmund. A top-four clash with bogey team Gladbach offers a chance at a riposte in the title race.Bayern Munich are never far removed from the pages of the national press, but in the last week alone their past, present and future have all been put under the microscope to varying degrees.

However, while Bayern have not shied away from discussing the transition to a post-'Robbery' era, the current campaign remains the primary focus.

Since the start of December, the German record titleholders have picked up 30 of a possible 33 points — a run of form that has stoked the fires of the most hotly-contested title race in recent memory and closed the gap on Dortmund to just three points.

"We're optimistic that we've put the crisis that we undoubtedly suffered between October and November behind us now," said club chairman Karl-Heinz Rummenigge. "It would be great to take the balcony of the town hall to show of one or two pieces of silverware in May. It's wide open."

Dortmund strengthened their title bid with a win over in-form Bayer Leverkusen last weekend and could stretch their lead to six when they play on Friday in Augsburg. Bayern have an opportunity to produce a riposte against out-of-form bogey team Gladbach, but recent history and a spate of injuries don't bode well.

"We're at the business end of the season now and we won't let the injuries get the better of us," said Niko Kovac, who is sweating on the fitness of several key players including Manuel Neuer (illness), David Alaba (tendon tear) and Leon Goretzka (ankle). "We need all three points, even though it will be a difficult game."

Bayern haven't been on the receiving end of twin league defeats against Gladbach since the 2011/12 campaign. To avoid that fate, Die Münchner will need to avenge Matchday 7's 3-0 loss at the Borussia Park, a ground where they've picked up just one win in their last four.

"The game in Munich, we conceded 3 goals after 3 bad mistakes – every shot was a goal," admitted Kovac. "The situation is different now. [But] they are not as bad as their latest results suggest."

When it comes to scoring goals, Saturday's encounter draws an interesting parallel between the two sides as both are coping with the effects of misfiring front men.

Gladbach top scorer Thorgan Hazard hasn't found the back of the net since the turn of the year and the Belgian's lack of impact in the final third has been a major factor in the Foals' recent three-game winless streak.

Conversely, Bayern's incredible run of form has come in spite of Robert Lewandowski struggling to recreate the goal scoring form which saw him rack up 89 league goals in the last three seasons.

"We need more support up front," Lewandowski told Bild following the narrow win over Hertha. "Sure, you also sometimes have to think about winning. We also have to get a clean sheet in the next game. But we were not creative enough in the middle against Hertha. That's why it wasn't easy for me to create chances. We have to improve that."

The Pole has already made 13 appearances without getting on the score sheet this season, which by his own lofty standards will be at least one too many. With just two goals in 12 Bundesliga games against Gladbach to his name, Bayern and their star striker will both be hoping to exorcise some lingering demons as they bid to keep the pressure on league leaders Dortmund.

– Borussia Dortmund get first crack of the whip against Augsburg on Friday. With 18 different goalscorers this season, BVB are two shy of Bremen's record, but could still be without talismanic captain Marco Reus.

– Eintracht Frankfurt and Hoffenheim meet, both sides with their sights fixed on the top 6. Only Bayern and Dortmund have scored more than these European hopefuls this season, so goals are on the cards.

– At the foot of the table, Stuttgart could fashion themselves much-needed breathing room against Hannover in a clash between the Bundesliga's most porous back lines. A win for Markus Weinzierl's side would move them five points clear and could lift them out of the bottom 3 for only the third time this season, if Augsburg also lose to Dortmund.