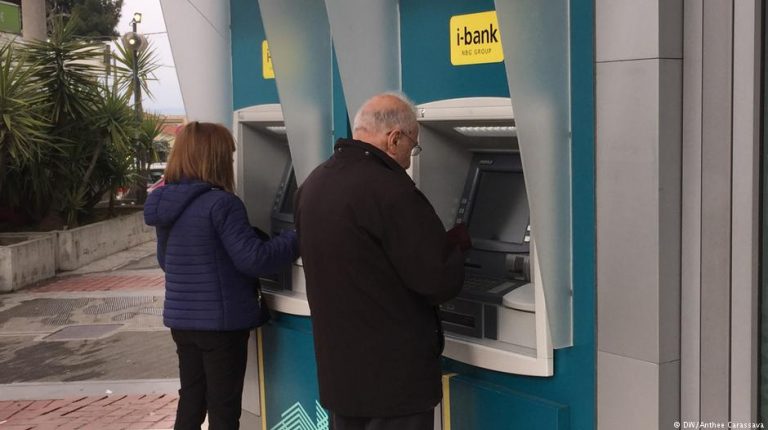 Plagued by eight exhausting years of financial crisis, millions of Greeks are unable to pay off their loans. But there are also those who don’t want to, as Anthee Carassava reports from Athens.Walk into any Greek bank and ask for a loan, and chances are you'll walk out jilted and empty handed. But not if you are Pavlos Polakis.

The chain-smoking health minister won almost instant approval for a mammoth €100,000 ($114,000) consumer loan this month, claiming he was in desperate need of the cash to cover personal and political expenses.

The revelation has sparked fierce political debate and an urgent inquiry by an Athens prosecutor after the country's central bank governor accused Polakis of calling him to complain, but also making "a preposterous" attempt to block him from investigating the controversial loan.

If charged with illegal phone tapping, Polakis could face up to 10 years in prison — a scandal which the government could surely do without ahead of key national elections in the coming months.

"It's called arrogance and abuse of authority," huffs Thomas Barouhas, a baker in Athens. "We're stuck in the rut," he says, shoveling trays of bread from a wall of steel ovens, "struggling to pay off our debts, our loans and exorbitant taxes imposed during the financial crisis, and government ministers like Polakis are walking off with easy loans."

"There isn't a business entity or household in Greece that isn't aching for a loan of cold cash," he adds. "I need a third of what Polakis took out to refurbish and jump-start my bakery. But the mere suggestion of it has my bank laughing."

Saving money next to impossible

A recent study by a leading Athens think tank showed some seven in 10 Greeks struggling to cover monthly expenses and accumulated debts as the country's anemic banking system continues to limit lending after eight exhausting years of austerity. More than 85 percent of those surveyed say they remain unable to put aside even the smallest of sums for savings or retirement; about half of them anticipate the economy will get even worse in the coming year despite Greece's exit from austerity.

Greece's turnaround from a fiscal basket case to a country posting continuous budget surpluses was crucial in a decision by lenders last August to free the European Union's worst economic performer from its bailout shackles.

The country's banks may have survived economic depression, but they have been forced to pay a heavy price; they turned into barely profitable institutions, unable to lend.

Mortgages are behind the biggest malaise. They account for about one third of all bad loans and are mainly linked to cash-strapped Greeks left jobless and unable to pay their mortgages by the crisis.

Still, a plump and pricier lot of loans include what locals here call batahtzides: lenders reluctant to pay, hoping to get a free ride on prospective write-offs or lenient legislation.

The Polakis affair underscores that, many Greeks say.

"He may be paying his dues now," said Sotiris Dimitrious, a 67-year-old butcher. "But who is to say whether the loan which he got with such ease as a minister will go unpaid in the future."

"Who are the banks ultimately going to go after?" he asked. "Me, a no-name tax payer with no cash and connections? Or, him or any other high-profile individual?"

"Eight years of financial crisis and strict supervision was supposed to fix Greece and its culture of failing practices, not prolong them."

The urgency of Greece's nonperforming loans has left the government and the country's central bank scrambling to stitch together a set of radical plans. A new insolvency law has also been drafted in recent days, preventing banks from foreclosing on most homeowners' primary residences.

But on Wednesday, the EU's executive arm, the European Commission, shot down those plans saying they were "too generous," insisting that Greek banks foreclose on lenders who default on their home loans.

Sheltering bad payers, the Commission said in its report, would raise "serious concerns regarding the law's impact on the payment culture and bank balance sheets… [Its] overall design could enable strategic defaults."

With elections due in the coming months, stiffer legislation dealing with Greece's swelling caste of indebted lenders could further harm the government's plummeting popularity.

"It's bound to irk many Greeks who can not pay," said Evangelos Davalos, a 44-year-old shopkeeper. "But it's more important to do away with the mindset and practice of these free riders that are strangling the banks and the economy as a whole."

Greek banks remain the slowest in tackling the burden among the top 10 EU countries ranked by NPL ratio, according to UBS. The faster they move to clean up their loan books, experts say, the greater ease they will have have in loosening lending standards, helping businesses and the economy grow.

"I'm not expecting anything," said Barouhas, the baker. "But maybe things can improve enough for my children. That's the hope we are all hanging on to."

Greece has until March 11 to produce a revised plan and a rash of other reforms or else face a freeze on €1 billion in funding the government desperately needs this spring, ahead of national elections.