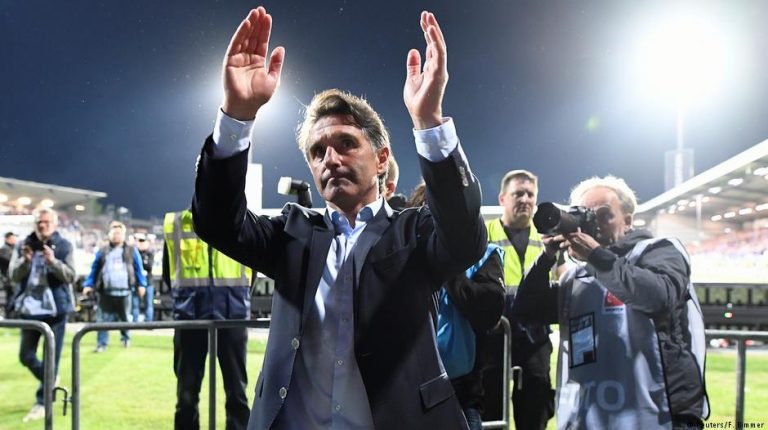 Wolfsburg face Werder Bremen on Sunday in an unfamiliar position of fifth. Bruno Labbadia has transformed the club from relegation fodder into European hopefuls, but could still depart Wolfsburg come June.Last March, as Wolfsburg were trailing 2-1 at home to Bayer Leverkusen, the club's fans were in a despondent, if humorously self-deprecating, mood.

"We're going down and we're not coming back, but we have Bruno Labbadia," they sang out in the Volkswagen Arena.

Labbadia had just taken over from the hapless Martin Schmidt and started his Wolfsburg coaching career with an unenviable record of one draw and one loss. It wasn't a great start, and it didn't improve much as the season progressed.

Just two wins in 11 games left Wolfsburg 16th and forced them to tackle Holstein Kiel in a two-legged promotion-relegation playoff to retain their Bundesliga status. While they navigated that challenge with ease, few predicted a bright future for Wolfsburg and Labbadia.

Yet on Sunday, exactly 12 months after that Leverkusen loss, Wolfsburg welcome Bremen to town flying high in fifth place.

It's been an astonishing turnaround and not one which many could have predicted. An uninspiring second spell with Hamburg had seen Labbadia's stock plummet and he spent 18 months without a job. When Wolfsburg signed him in February 2018, he was expected to keep them afloat but not much else.

That Labbadia rescued the club was not a surprise, but what he's achieved this year has come right out of the blue.

Wolfsburg have been transformed from an underperforming, defensive outfit relying on counter attacks to a determined side mixing fighting spirit with a possession-based, controlled-pressing game. Both the club and coach's stock has shot up once again.

The Wolves' 38 goals this season have already eclipsed their totals from the last two seasons. And while summer arrivals such as left-back Jerome Roussillon and striker Wout Weghorst have strengthened the team, Labbadia has mostly impressed by improving the existing roster and changing their mentality.

Captain Joshua Guilavogui has become a lynchpin in the holding midfield role of a 4-3-3 and Wolfsburg haven't lost a match with their captain in the starting XI. Admir Mehmedi is finally threatening to fulfill his potential with five goals and four assists, while John Anthony Brooks has helped solidify a once crumbling defense with eight clean sheets.

"The whole thinking of the team has changed,” Labaddia told Die Welt back in January. "The attitude, the willingness, the togetherness. We've turned everything around.”

Eight wins in their last 12 games puts Wolfsburg on 38 points, also better than their last two season's totals. Dreams of returning to Champions League football are not fanciful anymore, if still a long shot.

Famous European nights such as the 2-0 victory over Real Madrid in the first leg of the Champions League quarterfinals three years ago could be returning to Wolfsburg, even if it's in the Europa League.

And Labbadia has achieved this extraordinary rise almost under the radar. That was until last weekend's surprise 3-0 thumping of Champions League contenders Borussia Mönchengladbach, a huge statement of intent.

Europe is now well and truly on the cards, but Labbadia's good work could be about to come undone this summer as the 53-year-old's contract expires in June.

The fact that Wolfsburg and Labaddia haven't agreed, or even discussed, a contract extension has drummed up a ton of speculation in the media. Some are reporting that CEO Jörg Schmadtke and Labbadia's less-than-rosy personal relationship could force the pair to part.

"We have a work-related relationship… I will certainly not exchange cooking recipes with him or plan a holiday together,” Schmadtke told Bild. "But it's not bad in my view. Sometimes the chemistry just isn't right.”

Colleagues don't have to be friends outside the office for a successful working relationship, but Labbadia was reportedly disappointed after a winter transfer window saw no new arrivals in Wolfsburg. Reports suggest his ambitions aren't being met.

And the lack of concrete commitments from either side has only fueled the speculation, despite the suggestion talks could start this spring.

"I am currently very, very open for everything and even curious about where it leads in the summer,” Labaddia told Sport1. "Whether I stay here in Wolfsburg or go somewhere else, we will see.”

There is talk that Wolfsburg have already targeted RB Salzburg's Marco Rose as a possible replacement, which would prove a fairly baffling move given the club's transformation under Labbadia.