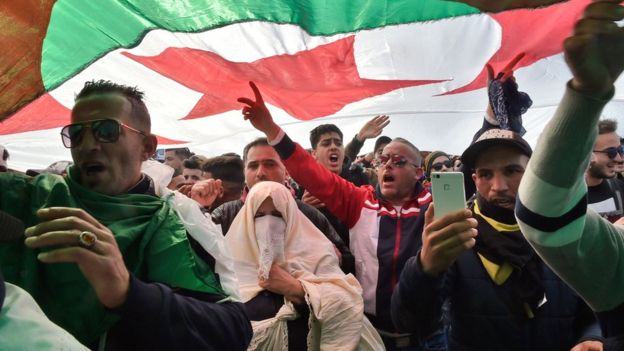 Anti-government protesters chanting “leave means leave” against Algerian President Abdelaziz Bouteflika amid clashes between police and demonstrators near the presidential palace, led to the injury of seven protesters and 50 police officers, and the arrest of 45 others according to authorities on Friday.

Demonstrations against the ailing Bouteflika to run for the presidential elections for the fifth-term witnesses in its 15th-day thousands of protesters pouring in the streets chanting “republic not monarchy,” stressing that their intentions were peaceful, while they faced tear gas fired by the security forces.

Sunday is the deadline to apply for the elections, as 82-year-old Bouteflika has travelled to Geneva conduct some medical checks, authorities stated on Wednesday. However, they did not officially announce his travel, and according to Euronews, Bouteflika’s private jet has returned to Algeria on Friday without him.

Bouteflika’s election campaign has announced the previous week that he will apply on Sunday.

Euronews added that Bouteflika has upon called his Diplomatic Advisor, Ramtane Lamamra, to negotiate concerning appointing him as a prime minister. Moreover they mentioned that Army Chief Ahmed Gaid Salah, requested from Bouteflika stay in Geneva until 3 March.

Noteworthy, Djamila Bouhired the Algerian 83-year-old militant, sparked the demonstrations on Friday. Bouhired opposed the French colonial occupation which subjected her to torture and sentenced her to execution; however the United Nations intervened to protect her.