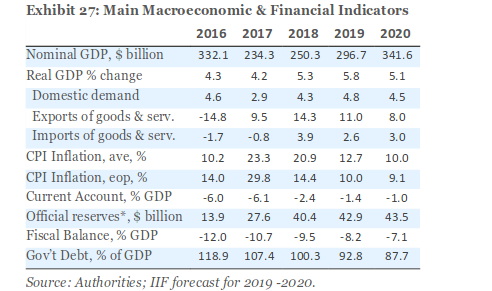 According to the report, this increase is supported by the continued strong recovery in tourism and rising natural gas production.

“However, Egypt’s economy remains shackled by a public sector that is bloated, inefficient, and unresponsive to market signals. To achieve higher and more sustainable growth, the country needs to redefine the role of the state and create more freedom and space for private-sector initiative,” the report continued.

Concerning the capital flows to Egypt, the report stated that the non-resident inflows to Egypt declined in 2018 as foreign investors sold $11bn worth of treasuries.

“Nevertheless, following the move to the pound flotation in November 2016, official reserves in Egypt more than doubled to $44bn by the end of 2018. Egypt has already issued $4.5bn worth of international bonds in 2019, and equity inflows have exhibited a positive trend so far. However, an increase in more stable FDI inflows is dependent on a better business environment,” the report continued.

In terms of the public debt, the report noted that it remains high and debt service costs have risen sharply, especially in Egypt and Lebanon.

The report also discusses the oil prices, expecting them to remain below $70/BBL, forecasting it to reach an average $65/BBL in 2019.

“With US oil shale fields facing an average break-even price of around $50 per barrel, expansion of drilling could lower oil prices further to $60/BBL in 2020,” the report continued.

Notably, oil prices have recouped about half of the losses incurred during the fourth quarter of 2018, supported by production cuts from OPEC, particularly Saudi Arabia, which has already cut its production by about 400,000 barrels per day below the level of October 2018.

Iran’s crude oil exports have fallen by about 1.2m barrels per day since April 2018 due to the US sanctions despite the November 2018 temporary waivers to eight countries. “Iranian oil exports could be at additional risk after the current waivers expire in April of this year,” according to the report.

In late 2018, OPEC, Russia, and several other non-OPEC oil producers agreed to cut crude oil production by 1.2m barrels per day from October production levels, for six months, starting in January 2019. Iran, Venezuela, and Libya were exempted from the cut, as they are currently producing well below the level agreed to in 2016 due to the ongoing US sanctions and political instability.