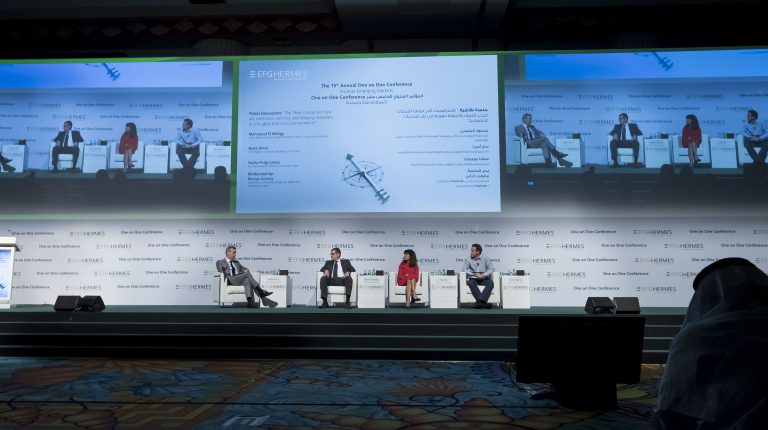 EFG Hermes, one of the leading financial services corporation in Frontier Emerging Markets (FEM), launched on Sunday its 15th annual One on One Conference in Dubai under the patronage of Sheikh Maktoum bin Mohammed bin Rashid Al Maktoum, the deputy ruler of Dubai.

During the conference EFG Hermes released the results of a survey conducted, where 34% of respondent said they believe Egypt would be the Middle East and North Africa top performing economy in 2019, followed by Saudi Arabia with 31%.

In regards to USD to EGP value, 42% respondent said they expect it to end they year at the EGP 18 mark, and 51% believe that political uncertainty as the top risks for business in 2019.

The conference, entitled “Navigating the Path to Opportunities,” witnessed the participation of executives from 186 companies from 26 countries as well as more than 520 investors representing 260 institutions and family offices, managing an aggregate $11tn in assets under management.

“The number of participating companies is up this year, with Saudi Arabia and Nigeria in particular increasing their representation at a time when both markets are experiencing important changes that will generate new opportunities,” stated Karim Awad, CEO of EFG Hermes.

Saudi Arabia’s inclusion in the MSCI and FTSE emerging market indices is expected to drive inflows through 2020 while volatility and expected medium-term decline in oil prices are creating powerful incentives for the kingdom and other GCC markets to enact regulatory change and fiscal reforms that will drive consolidation and strengthen non-oil industries. Meanwhile, Nigeria is facing several headwinds in terms of macro and equity performance, but visibility remains strong on 2019 earnings growth and yields continue to be attractive.

“Since its inception, we have sought to make this event a direct access platform for global investors and companies in the world’s most compelling markets. Even in the face of macroeconomic challenges such as significant capital outflows from emerging markets and rising US interest rates, frontier emerging markets represent the greatest potential for driving growth and generating accretive returns,” Awad added.

Furthermore, Co-CEO of the Investment Bank at EFG Hermes, Mohamed Ebeid, said that the overall outlook for frontier markets in 2019 is mixed, with macro-level factors, such as the moderation of China’s commodities demand, the weakening of the yuan, ongoing tensions between China and the US, and the US Federal Reserve’s current fiscal tightening cycle creating significant challenges across regions.

However, Ebeid explained that at the same time, opportunities are arising in countries, such as Ethiopia and Rwanda, which are expected to be among the top 10 markets for growth in 2019 thanks to innovative power generation and infrastructure projects. Kenya is making the reforms necessary to boost growth while Pakistan’s attractive valuation and history of good long-term returns make it an appealing venue for investment despite the current period of high inflation and stock market volatility. Moreover, Ethiopia has appointed a commission to explore opening a stock exchange and all the needed regulatory frameworks and structures.

Topics: dubai EFG Hermes One on One Conference