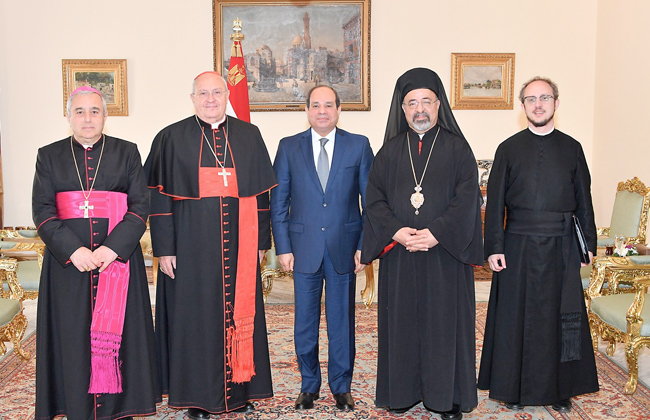 President Abdel Fattah Al-Sisi asserted Egypt’s keenness to promote freedom of worship during a meeting with a Vatican delegation visiting Cairo on Sunday.

Presidential spokesperson, Bassam Rady, said that the delegation discussed with Al-Sisi boosting the bilateral relations, noting a significant development since Pope Francis’s visit to Egypt in 2017.

During the meeting, Al-Sisi stressed the values of acceptance and tolerance, as well as freedom of worship.

In the last years, the Vatican and Al-Azhar institutions has been teaming up to counter-terrorism and radical thoughts globally. The Vatican delegation has expressed the Pope’s regards to the leader of Egypt.

In early February, the Grand Imam of Al-Azhar, Ahmed Al-Tayeb, and Pope Francis signed a document on human fraternity at the end of the Global Conference of Human Fraternity, which was held in Abu Dhabi, the UAE.

The Document on Human Fraternity for World Peace and Living Together seeks to encourage stronger relationships between people, promote coexistence, and confront extremism and its negative impacts. In a speech, Pope Francis said that “hatred and violence” in the name of God cannot be justified, praising the value of education in reducing conflict.

The Global Conference of Human Fraternity was held from 3 to 5 February. More than 700 intellectuals, political, and religious leaders participated in the conference. It also marked the first visit of Pope Francis to the Arabian Peninsula.

During his visit, the Pope commenting on extremism, said that “due to its history and the unique geographic location, Egypt plays an indispensable role in the Middle East. The blind and inhumane violence is there because of the desire for power, arms trade, dangerous social problems, and religious extremism that uses the name of God to commit heinous massacres and crimes.”