The Egyptian Banking Institute (EBI) has embarked on implementing a comprehensive development plan in order to stay up-to-date with the new world of training, and meet the needs of banks operating in the Egyptian market, according to its Executive Director, Abdel Aziz Nossier.

The development process being implemented receives the full support of the Central Bank of Egypt (CBE). It includes training programmes, aids and curricula, as well as the development of infrastructure related to the training halls and the digital infrastructure, along with increasing the beneficiaries of e-learning so as to reach the largest number of bankers and students in Egypt’s governorates.

Nossier pointed out that the development of the training halls in all the headquarters of the institute is scheduled to be completed by the end of 2019.

He stressed that the support the institute received from the CBE, represented by Governor Tarek Amer, is currently unprecedented, noting that this support is not only on the financial level, but also at the morale level.

This came during a tour organised by the EBI last Wednesday for a number of journalists, including the editor of Daily News Egypt, to reveal the latest developments at the EBI, and its achievements during the last period, next to its role in providing services and training for the financial and banking sector employees. 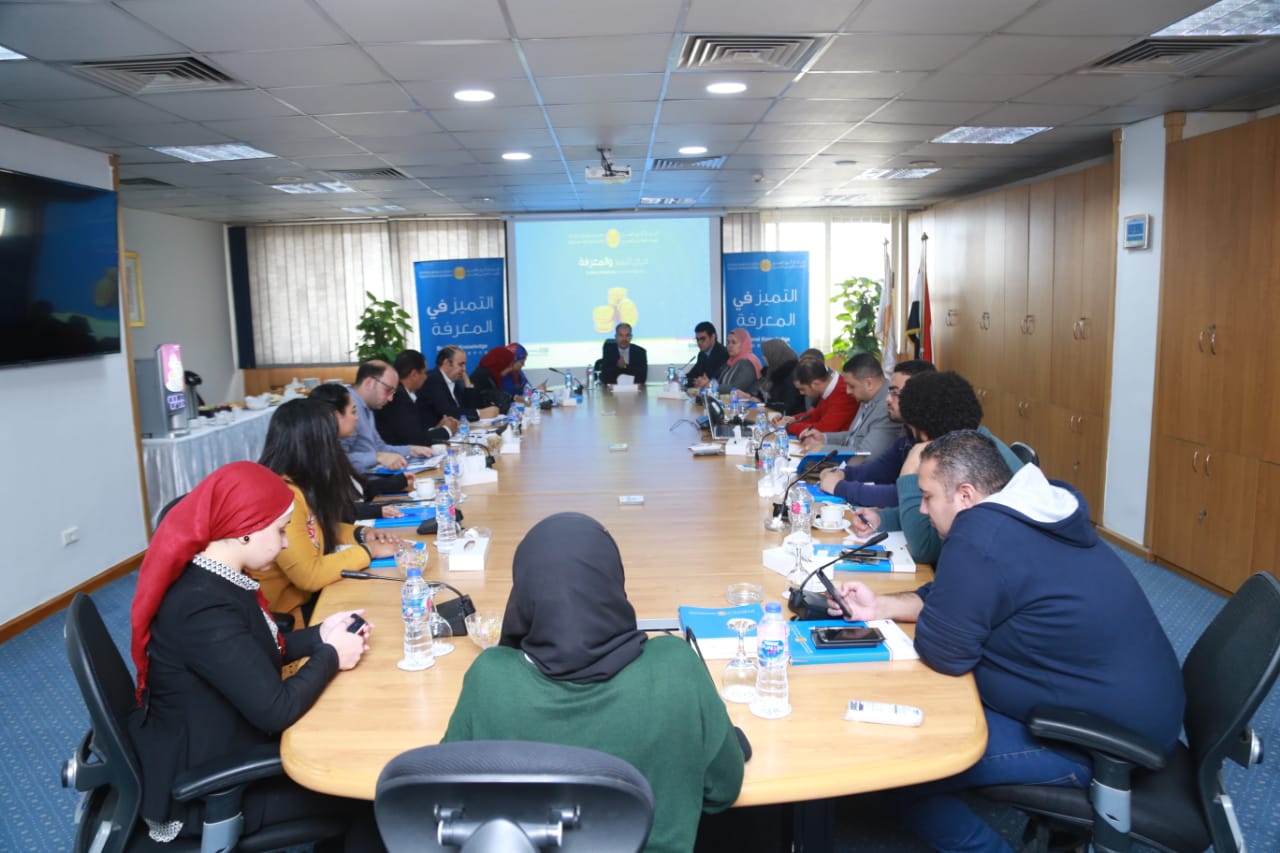 The EBI is the CBE’s training arm. It was established in 1991, with the aim of developing the skills of banking sector employees.

The institute has four branches, including two in Cairo, one in Alexandria and another in Port Said. It has 30 lecture halls and nine computer labs.

According to Nossier, the institute consists of 6 departments which offer training and assessment services, along with 3 other support departments.

He explained that the largest department providing training services is the Banking and Finance Operations Department. This department provides training for banking personnel in the technical part of their business, such as credit, finance, risk, compliance, retail banking and branch management through dozens of training programmes.

Furthermore, he pointed out that the third management is the management of small and medium-sized enterprises (SMEs), which provides training programmes for employees in the sectors of SMEs in banks, as well as for customers with banks who own the projects.

The fourth department is the Computer and Information Technology Department, which provides programmes related to the development of the information sector in banks, along with computer and network security.

The fifth is the governance department and the executive leadership training, which is tasked with the provision of governance programmes, and the departments related to the development of the skills of senior bank leaders such as board members, delegated members, and non-executive members.

The sixth administration is the Evaluation Department, which offers programmes to evaluate the banking sector at three levels: an assessment of recruitment, an evaluation of promotions, or an assessment of development.

Nossier added thatabout 12 banks benefited from EBI in recruitment, five banks for promotions, and 10 banks for performance development. The EBI further plans to establish a new centre for evaluation services, which is scheduled to open on an area of 700 sqm within the coming two months.

As for the other supporting departments, Nossier explained that there is TQM, the department concerned with guaranteeing and confirming the quality of the educational process, and is also concerned with the preparation and selection of lecturers and the evaluation of the scientific material being taught.

Another department is the International Cooperation Department, which is concerned with providing certificates and agreements with foreign institutions or universities. It is also interested in organising field visits to foreign countries to learn about the experiences of these countries and the latest experiences in the banking sector. Moreover, Nossier stated that the institute deals with all known international bodies, both in obtaining programes and training courses, or field visits, or the introduction of experts from them.

Among these institutions are Euromoney, Fitch, Frankfurt School, Moody’s, as well as Wharton, Pennsylvania, America, and the London School of Economics, among other universities.

The third department is the Research and Awareness Department, which is responsible for all research and awareness raising activities, as well as the establishment of the annual conference of the institute, the publication of a quarterly magazine, and all related activities and research competitions conducted by the institute.

According to Nossier, the visit of the Governor of the CBE, Tarek Amer, aimed to inspect the latest developments in the training process as well as launch of one of its strategic programmes for 2019, entitled the Corporate Finance and Credit Certification Programme.

Nossier explained that this programme is the result of the agreement between Financial Edge, Moody’s Analytics, and the EBI. The programme was prepared in collaboration with JP Morgan Chase, in order to provide a similar programme to that offered in the United States.

He added that the number of hours of training for the programme is 280, and it is attended by 33 bankers from 14 banks. Additionally, the programme is presented for the first time in Egypt according to the  directives of the governor of the CBE in order to provide the best international banking programmes and practices in the field of corporate finance for employees in the Egyptian banking sector, he pointed out that. It is also the first time to be executed outside JP Morgan Chase. In February 2018, the EBI launched the e-learning service.

According to Nossier, there are three banks that have benefited from this service so far, for 4,361 trainees. The institute is currently negotiating with three other banks to provide this service to their employees.

“The number of beneficiaries of the services of the institute amounted to 54,705 people during the fiscal year (FY) 2017/18, ending 30 June 2018, an increase of 24% over 2016/17, where they were qualified to work in the banking sector technically and administratively, as well as contribute to building their character to be able to interact and deal with others in the labour market,” Nossier said.

The total number of training courses amounted to 1,985 courses, up by 24%, while training hours reached 3,638, up by 36% added EBI’s Executive Director.

He revealed the start of the implementation of the largest initiative to train employees in the banking sector on information security, under the supervision of the Information Technology Sector of the CBE and the Computer Emergency Response Unit.

Furthermore, he explained that this initiative will contribute toward the preparation of bankers to deal with information security and cybersecurity, pointing out that it aims to build and prepare cadres to achieve development.

In a different context, Nossier stressed that the institute held a training programme on the role of central banks in a changing market-the Egyptian experience, for employees of African Central Banks, in cooperation with the International Agency for Partnership for Development of the Egyptian ministry of foreign affairs, which benefited 35 representatives from 23 African countries, in the framework of enhancing banking cooperation and transfering expertise to various African countries.

“The EBI launched an initiative, the first of its kind in the banking sector, to offer a training programme to serve customers with special abilities,” Nossier said.

Moreover, he explained that this initiative aims to attract and encourage those with special abilities to deal with the banking sector, through training several customer service staff in several bank branches on how to deal with them. The initiative aims to support and provide more opportunities for them, as an integral part of the community entity, where the Egyptian state works to integrate them and empower them economically, politically, and socially.

What’s more, he cited that the training is provided by a selection of the best trainers specialised in this field, where the courses rely heavily on practical simulation, and the use of a volunteer with special abilities to conduct practical experiments during the programme, in order to increase interaction and put a real picture of how to deal with banking through illustrative examples and representative roles.

According to Nossier, a number of banks took part in the initiative spanning eight training courses with the participation of 120 employees.

These banks include National Bank of Egypt, Alex Bank, the United Bank, and BLOM Bank, in addition to the implementation of a training programme to learn sign language for employees of HSBC Bank.

“During the last FY, the institute has prepared four visits of bank employees working in the Egyptian market to a number of important places in the world, such as Silicon Valley, and visiting companies such as Google, Facebook, and Cisco,” he said.

Nossier added that the institute has also made 11 international visits to bring together workers in a number of banking sectors of local banks and their counterparts in countries which have achieved success stories, such as France; the US;, the United Kingdom; Switzerland; the Netherlands; Tunisia; Germany, and Poland.

The SMEs department has also organised three international visits for workers in this sector in Egypt to the Netherlands, India, and Singapore, as well as 19 credit courses for SMEs employees.

An agreement is now activated, which has been signed with the ministry of agriculture to benefit from the French agency grant to support small projects in the agricultural sector through a number of training courses and workshops.

In terms of training for employment, Nossier said that the institute cooperated with the American University in Cairo to submit an updated version of the programme to benefit university students.

He added that one of the best successes achieved by the EBI during the last period is the preparation of training programmes for journalists, which came at the will of the CBE in order to develop the skills of economic journalists.

On the level of entrepreneurship support, Nossier explained that the institute aims to train young people and entrepreneurs on how to identify viable project ideas, choose the project idea that fits their respective characteristics, and adapt to their local environments, through a series of training programmes in different governorates.

“The institute’s library provides a collection of books and references in the fields of finance, banking, economics, accounting, and information technology to provide timely and appropriate information to the beneficiaries, using traditional and electronic sources of information to support the institute’s training programmes and research activities,” Nossier said.

Nossier also stressed the institute’s interest in women by pointing out that January 2019 witnessed the graduation of the first batch of the ‘Most Influential Ladies’ programme launched in early 2018. The aim of this programme is to introduce women to the concepts of advanced leadership and to transfer experience to a new generation of women workers in different fields.