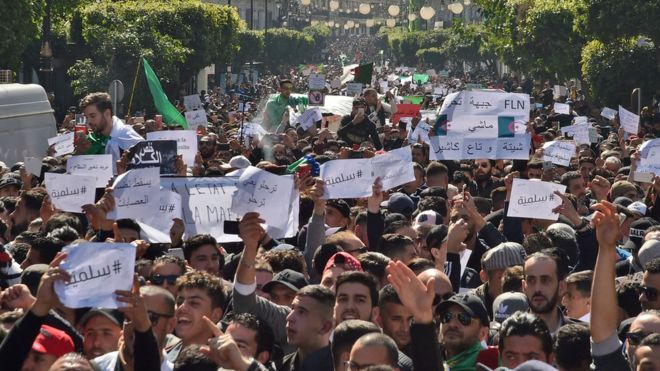 Algerian President Abdelaziz Bouteflika promised to call for early election within one year if re-elected for a fifth time in April, Algerian state-run TV channel said on Sunday night.

Bouteflika, who is currently receiving medical care in Switzerland, has ruled the country since 1999 and is currently bidding for a fifth term despite his deteriorating health. This led to mass protests across the country.

“I have heard the pleas of protesters and especially thousands of young people who asked about our nation’s future,” Bouteflika, the wheelchair-bound leader is rarely seen in public, wrote in a letter read out on state TV.

He pledged he would organise a “national conference” within the first year of his fifth term, and the conference would then set up early polls with him not running.

The conference would decide on a new election date, he said, according to the written statement read by his campaign manager and Transport Minister, Abdelghani Zaalene. The vote would ensure a smooth transition of power in “calm circumstances, and in an atmosphere of freedom and transparency.”

On Sunday, thousands took to the streets in several cities across the country. In response, Algerian security forces used water cannon and teargas to disperse the crowd of mostly students in downtown Algiers. Some of the protesters managed to break through the security cordon and march to the nearby Constitutional Council, demanding that the body reject the Bouteflika candidacy. The deadline for registering candidates was set to expire at midnight.

A crowd of mostly students in the centre of the capital chanted “Bouteflika go away!” A diplomatic source cited by the AFP news agency estimated some 70,000 people gathered in the capital.

“We will not stop until we get rid of this system,” said Aicha, a 23-year-old student.

There were reports of similar demonstrations taking place in towns and cities throughout the country. Thousands of Algerians also protested in Paris and other French cities. At least one protester was killed in clashes with police earlier this week in Algeria.

Despite the protests, Bouteflika’s team managed to file his candidacy papers, confirming he would seek re-election, however, Reuters also cited the head of election commission Abdelwahab Derbal, as saying that every candidate was obliged to present the candidacy papers in person.