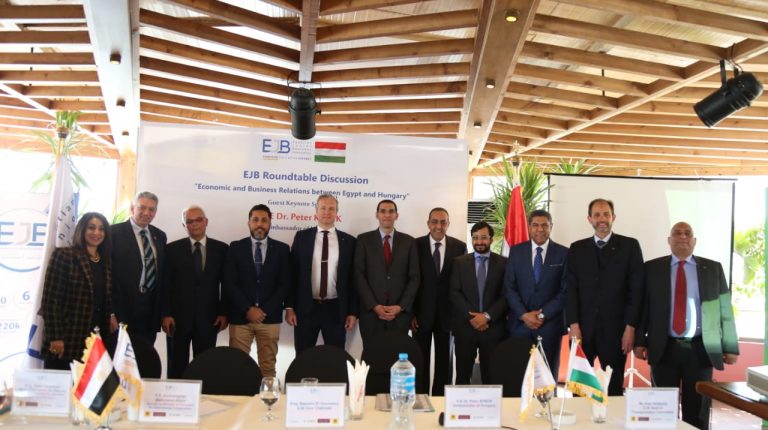 The Egyptian Junior Business Association (EJB) will sign a protocol with a Hungarian Businesspersons Association, upon the recommendation of the Hungarian ambassador in Cairo, Péter Kveck.

During the session held by the EJB on the Egyptian-Hungarian economic relations, Kveck proposed to sign a joint cooperation protocol with one of the two businesspersons’ associations in Hungary, which will pay a visit to Cairo in mid-April, the EJB Secretary-General, Gamal Abu Ali, told Daily News Egypt (DNE).

“We will study the possibility to establish a partnership, as well as delegating some our members to pay a visit to Hungary to open new channels for joint collaboration,” Abu Ali said, adding that the EJB has discussed with its members to establish similar collaborations with other countries, such as the US, the Netherlands, and Sweden.

“Hungary has huge firms which can provide Egypt with the necessary experience, using the highest security and safety measures,” Kveck told DNE, stressing on the strong relations between the two countries. He revealed that Egypt and Hungary have several joint projects to be implemented very soon in the field of energy, besides the touristic visits of both countries’ citizens.

The EJB Treasurer, Mohamed El Sawy, said the association is considering to establish a centre to hold the tourism sector’s conferences and conventions, with the aim of promoting tourism in Egypt, adding that the association will commence taking the necessary measures to obtain the official permits to found the centre, after conducting a comprehensive study, to be activated by the end of 2019.

Meanwhile, the board member, Bassam El Shanawany, said the EJB is keen on contributing to developing the transportation sector in Egypt, by resorting to the Hungarian experience in that field.

“What happened – referring to the Ramses Station incident – proves that Egypt badly needs to develop the whole sector, whether on the level of workers, or using the modern technology,” El Shanawany told DNE, asserting that the Hungarian side expressed its readiness to provide the Egyptian transportation sector with the necessary trainings, education, and the latest technology.

Additionally, a rountable discussion was held, and attended by the adviser to Minister of Transport Ambassador Mahmoud Allam , and Nabil Doweidar , the Acting Chairperson for the Holding Company for Maritime and Land transport to discuss the Egyptian Hungarian business relations. In his opening remarks, Bassam El-Shanawany EJB Vice Chairman presented the Association strategy of this year which will focus largely on start-ups and SMES in addition to many other initiatives in supporting the development of the Technical Education through TVET and Eshtaghal Fany” Program.

Allam assured the members that the modernisation of the train systems in Egypt is an important priority for solving its infrastructure problems and training as well as raising the efficiency of its human resources. He also added that it is imperative to implement an integrated development and modernized railways systems in Egypt with the latest technology and safety systems in the world.

Doweidar emphasised the importance of reviving the Egyptian Maritime Company and currently they are working on preparing technical studies for commercial access to the African and Europe market, especially that there are existing studies for the navigation of shipping lines to operate once again to the African markets in the ports located in the Eastern African Continent in Kenya and Tanzania and Europe such as Venice Through an integrated system involving all activities other than maritime transport such as export, import activities, storage and road transport of goods to complete the system.

Technical education and vocational training reform are an imperative necessity to produce cadres fully aware of the market’s needs: director