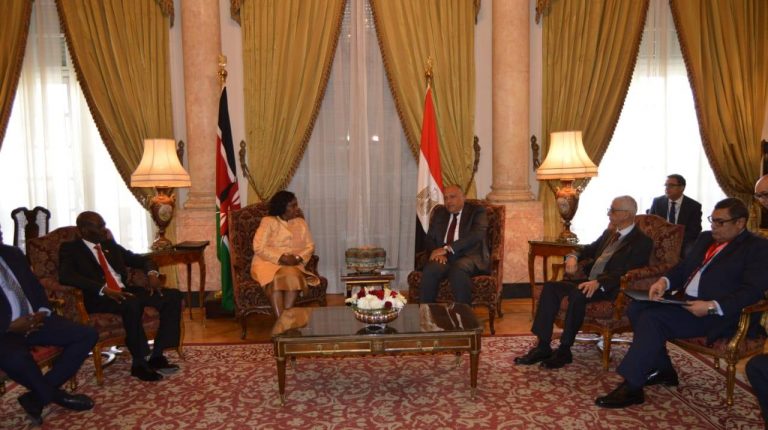 Egypt’s Minister of Foreign Affairs, Sameh Shoukry, discussed the bilateral relations with his Kenyan counterpart, Monica Juma, and Kenyan officials during his visit to Nairobi on Monday, in order to address the bilateral cooperation between the two countries, in light of Egypt’s chairpersonship of the African Union (AU).

Shoukry stressed Egypt’s keenness on boosting the developmental cooperation between Cairo and Nairobi at all levels, particularly in the fields that meets the Kenyan priorities including health, energy, housing, and manufacturing, according to a statement from the ministry of foreign affairs’ spokesperson, Ahmed Hafez.

He also added that Egypt is looking forward to increasing the trade exchange with Kenya.

Moreover, Hafez said that the two ministers addressed building the Kenyan capabilities and transferring the Egyptian experience to Kenya through the Egyptian Agency of Partnership for Development.

Shoukry expressed Egypt’s readiness for increasing the number of training scholarships to Kenya, including security training on countering terrorism. Regarding the regional issues, Shoukry stressed Egypt’s interest in increasing coordination between the two countries during Egypt’s chairpersonship over the AU.

He stressed that Egypt aims to restore peace, as well as to reconstruct and support economic accumulation and regional integration in order to achieve economic growth and stability in the African countries.

The two ministers discussed the situation in the Democratic Congo and the updates in Somalia, in addition to the situations in South Sudan and Burundi.

For her part, Juma stressed her country’s interest in the bilateral cooperation with Egypt, as well as the role of Al-Azhar in spreading the correct teachings of Islam.