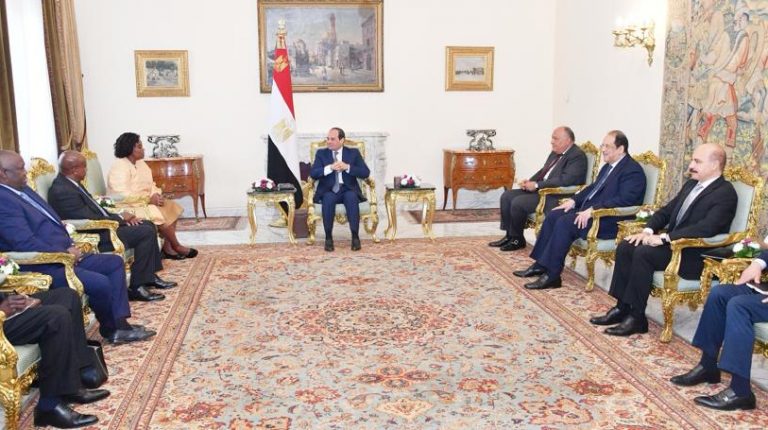 Presidency spokesperson, Bassam Rady, said that the Kenyan delegation also included the Kenyan Attorney General and the Director of the National Intelligence Service. During the meeting, Al-Sisi conveyed his greetings to Kenyan counterpart Uhuru Kenyatta.

Both sides showed interest in promoting relations between the two countries.

For his part, Juma praised the success of the last AU summit in Addis Ababa, during which Al-Sisi received the leadership of the union.

Egypt’s chairpersonship of the summit “reflects its pivotal role in the African Union,” Rady quoted Juma.

Also, the meeting tackled other regional issues, including the latest developments in the Horn of Africa and methods to boost cooperation, combat terrorism and extremism, according to Rady.

On Monday, Al-Sisi also emphasised the government’s strategies on helping the neediest people and ensuring the delivery of subsidies to the most deserving segments of the society, during a meeting with several ministers.

Also, Al-Sisi approved the issuance of the law to regulate the National Council of People with Disabilities. The law was approved by the Parliament in 2018. The law stipulates that the council is “an independent body that aims to promote, develop, and protect the rights of persons with disabilities and their constitutional dignity.”

In December 2018, Egypt announced the allocation of a fund of EGP 100m with the aim of empowering people with special needs, during the “Different, We Are Able” event held in Cairo, in celebration of the International Day of Persons with Disabilities (PwD).