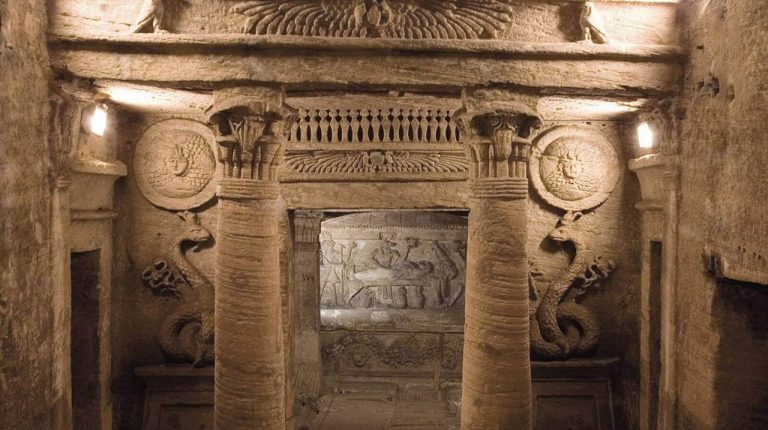 Saving hundreds of rare relics from drowning, the Ministry of Antiquities announced completing the restoration of Kom El-Shoqafa archaeological site in Alexandria. The renovation process included lowering underground water that was threatening the relics in the tombs.

The restoration was conducted with the help of the United States Agency for International Development (USAID) and the National Authority for Potable Water and Sewerage (NAPWAS). USAID granted the renovation with a total of $5.7m in order to facilitate the process and shortens its required time.

The area holds historical importance due to its catacombs which are considered one of the Seven Wonders of the Medieval World. The site also contains several remains from the Greek and Roman eras.

Leakage of underground water was the main threat of the area, as well as the increasing humidity being located near of Mahmoudiya Canal.

The site is planned to be reopened as an open museum. The restoration of Kom El-Shoqafa is part of the ministry’s latest plan in renovating abandoned archaeological sites seeking to direct more attention to them.

Moustafa Waziri, secretary general of the Supreme Council of Antiquities, stated that two of the tombs were already restored, and the other tombs are still undergoing renovation.

According to a previous statement by the ministry, the open museum will be divided into four sections. The first will be dedicated to funeral architecture and is planned to contain 34 tombs with detailed signs revealing the description and era of each of them. While the second part of the museum will be dedicated to religious architecture where several statues are to be displayed including those of sphinx figures.

The third part will display civil architecture, specifically the remains of unearthed structures including building columns. The fourth extension will be dedicated to artefacts the committee expects to be discovered throughout the restoration process.