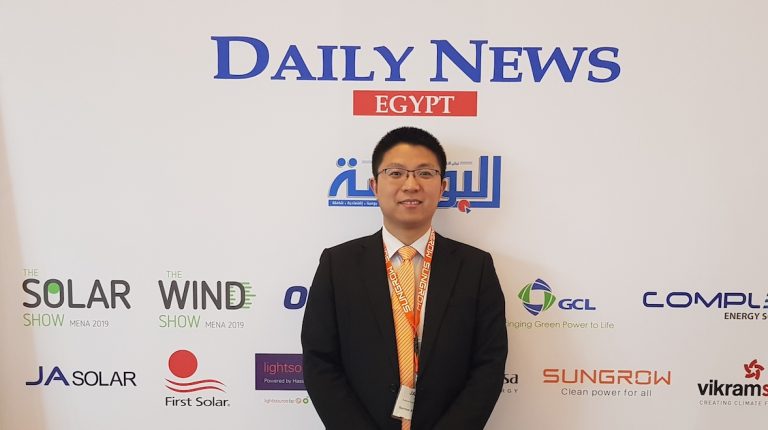 Founded back in 1997 by a university professor Cao Renxian, sungrow is one of the largest inverter solution supplier for renewables with over 70 Giga Watt installed worldwide, the company opened their MENA office in Dubai, and has installed 400 MW in the region.

The company has been commissioned a 142 MW project at Benban Solar Park in Egypt, Jason Wang, chief representative of Sungrow Middle East DMCC was a speaker of Solar Show MENA 2019, which was held in Cairo.

Mr. Wang told Daily News Egypt that the MENA region is very promising market, as the investors want to inject more investments in renewable energy projects, “in the past, most of the projects in renewable energy were utility projects, now we can see more and more of applications,  in china there are some solar park projects are located in the mountains, and the storage of the energy is getting improved “.

“Last October, we opened our office in Dubai, as we strongly believe that Middle East market will be the next market for solar energy industry, Egypt has an ambition target to produce more than 1 GW, that target has attracted many European banks to come and invest in the country, there is definitely  growing interest in investing in renewable energy in the region”, he added.

According to World Resources Institute (WRI)., the MENA region could get more benefits from the renewable energy more than electricity,  which includes cutting planet-warming greenhouse gas emissions and saving water.

In a recent study of WRI showed that Water could be saved by switching to renewable solar energy from fossil fuel electricity generation that uses up water, as fresh and sea water is often used in the process of cooling fossil-fuel power plants.

Wang believes the competition between fossil fuel and renewable energy will end in favor renewable energy, “If we go back 10 years ago, solar PV was very expensive, but the prices has been going down, now the cost of solar energy is lower than oil and gas, not to mention it is  environmentally friendly source of energy”.