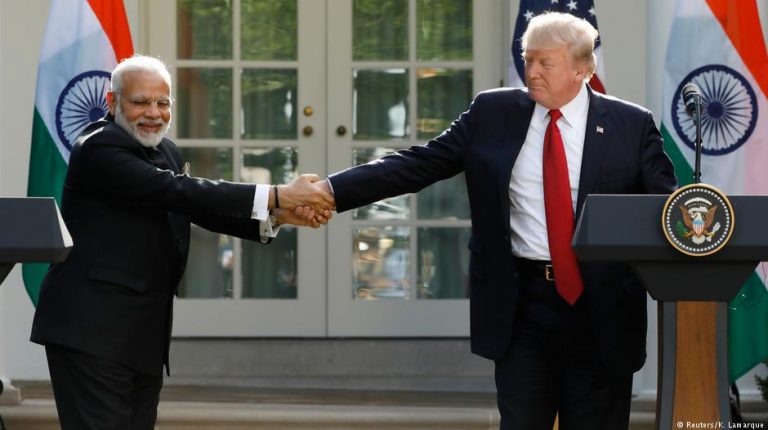 The US has decided to end its preferential trade treatment for India. New Delhi has played down the economic impact of the move, but it could cost Narendra Modi politically as he seeks a second term.US President Donald Trump has decided to end Washington's preferential trade treatment for India that allows a duty exemption on more than $5 billion (€4.4 billion) worth of its goods coming into the United States.

Trump, who has often called out India for its high tariffs, said his move was prompted by lack of assurances from New Delhi that "it will provide equitable and reasonable access to the markets of India."

Indian officials played down the impact of the move, saying the preferential treatment brought benefits of just around $200 million annually. India exported around $50 billion worth of goods to the United States in 2017.

"It does not come as a bolt from the blue," Ajay Sahai, the director general of the Federation of Indian Export Organizations, told DW. "Even though the GSP (preferential treatment) is given on a non-reciprocal basis, the US was seeking market access and tariff reduction in exchange during our negotiations."

Sahai said the US move, which would see tariffs of between 2-3 percent on the exempted goods, is most likely to hit leather, food processing, textile and few engineering goods. He, however, warned that the removal of the preferential trade status would also hurt US companies, which import Indian intermediate and semi-finished goods as raw materials on the cheap.

"While the stated benefits of the GSP are less than $200 million, $5.6 billion of Indian exports will suddenly lose competitiveness in the US market especially as compared to FTA (Free Trade Agreement) nations like Mexico," Mihir Swarup Sharma, senior fellow at think tank Observer Research Foundation, told DW. "This impact will be considerable."

Sahai said the exporters' body would approach the Indian government to seek support for the affected industries.

India's opposition could grab the opportunity to embarrass Prime Minister Narendra Modi just weeks before he seeks a second term. Modi has pointed to his personal equation with global leaders, including Trump, to highlight his foreign policy successes.

"Modi has claimed that his personal diplomacy with leaders like Trump has led to benefits for India," Mihir Sharma said. "This is going to be questioned given that under his watch a concession given to India since 1976 has been withdrawn."

Ashok Bhattacharya, former editor of India's Business Standard newspaper, told DW that the US move was a "politically nuanced lesson the US has given to India" but was unlikely to have a major political impact.

"Trade issues like the denial of GSP benefits do not enjoy a very high level of political salience in India," he said.

Trade ties between India and the United States have been strained after New Delhi adopted new rules on e-commerce, preventing foreign retailers, US giants such as Amazon and Flipkart owner Walmart, for selling goods online through their affiliated companies.

Earlier, India forced US credit card companies Mastercard and Visa to locally store data on transactions made in India.

"India has implemented a wide array of trade barriers that create serious negative effects on United States commerce," the US Trade Representative's Office said in a statement on Monday. "Despite intensive engagement, India has failed to take the necessary steps to meet the GSP criterion."

The US goods and services trade deficit with India was $27.3 billion in 2017, the USTR estimates.

India is the world's biggest beneficiary of America's Generalized System of Preferences (GSP) program, which was launched in the 1970s to help poor and developing companies grow their economies by encouraging trade.

Many trade experts contend that India — one of the largest economies in the world — may have graduated out of the program meant for the least-developed countries.

Today, India is among the fastest-growing economies in the world, clocking an annual growth rate in excess of 7 percent. The figure is way above the infamous Hindu rate of growth of 3.5 percent seen at the time India was enrolled in the program.

A spokeswoman for India's Commerce Ministry said India would not try to hold onto its GSP status, which is expected to remain for at least 60 days after the notifications.