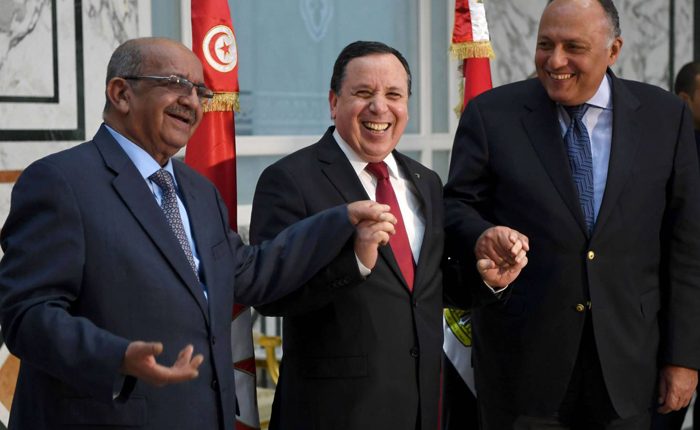 The Minister of Foreign Affairs, Sameh Shoukry, said on Tuesday that he discussed the situation in Libya and the regional and international interventions in Libya’s internal affairs with his Tunisian and Algerian counterparts.

Following a meeting which gathered the three ministers in Cairo, Shoukry said in a press conference that they agreed on increasing political efforts and communications with all parties of the Libyan crisis, in order to end the conflict and restore stability.

The foreign ministers of the three countries stressed their support for Libya to establish its national institutions and achieve its national reconciliation, as well as maintain the integrity of the state of Libya.

Although the three ministers expressed concerns over the deteriorating security situation in Libya, they praised the efforts of the UN-recognised government in enhancing the economic state in Libya.

They renewed their refusal of any foreign intervention which complicated the situation in Libya. They also asserted their support for the political solution which is based on dialogue and agreement between all concerned parties in accordance with the political agreement signed in December 2015.

Moreover, the ministers called upon the parties of the crisis to show more flexibility in finalising the political process under the patronage of the UN. They also renewed support for the Head of the United Nations Support Mission in Libya, Ghassan Salamé.

Violence has engulfed Libya since 2011, when a popular uprising ended with the ousting and death of former President Muammar Gaddafi. Since the ousting of Gaddafi the country has witnessed rival governments and parliaments in the west and east.

Furthermore, the Prime Minister of the UN-recognised government in Libya, Fayez Al-Serraj, said on Tuesday that parliamentary elections will be held by the end of this year. The UN previously announced that the Libyan elections could be held on 10 December 2019.

Last week, Al-Serraj met with the leader of the Libyan National Army, Khalifa Haftar, who is controlling the eastern parts of Libya. He did not offer details about the meeting with Haftar which was held in Abu Dhabi, in the UAE, but said that the elections will be held in agreement with Haftar.