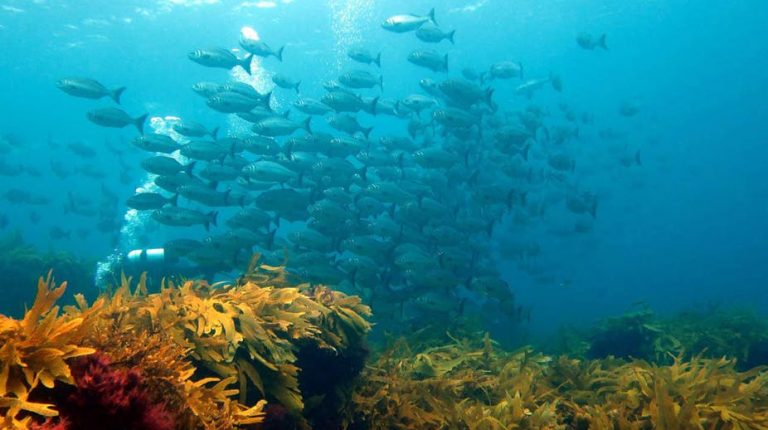 Marine heatwaves (MHWs) are increasing in frequency, with 54% surge in heatwave days per year in the period of 1987-2016 compared to 1925-1954, according to a recent paper published on Monday in the Nature Climate Change.

Researchers from a number of Australian and British universities found that these events vary in their physical manifestations, yet all affect key species and ecosystem structure and functioning.

The aim of the study was to use a unifying framework that allows marine heatwaves to be compared across latitudes, ocean basins, and ecosystems.

“Our analysis showed that the number of days in any one year that would be classed as MHWs has increased by 54% on average over about 60 years,” Dan Smale, researcher in the UK Marine Biological Association and first author of the study, told Daily News Egypt.

This increase in heatwaves means that any given population of marine organisms, whether corals, seaweeds, or fish, have likely experienced more extreme ocean temperatures in the early 21st century compared to the middle of 20th century.

Sea temperature has a strong influence over marine organisms, as they evolved to exist within specific thermal levels, and they have optimal temperatures for performance. If sea temperatures get too high, marine organisms may be unable to cope, become stressed, and ultimately die. This may be just a few individuals or entire populations, leading to local extinctions or changing entire ecosystems.

Just as how atmospheric heatwaves can cause forest fires, crop failures, and animal deaths, marine heatwaves can also cause widespread devastation. Regional case studies have shown how MHWs can devastate coral reefs, kelp forests, and seagrass meadows, and cause mass die-offs of fish, lobsters, birds, and mammals if the food web is disrupted.

By impacting ecosystem goods and services, such as fisheries landings and biogeochemical processes, MHWs can also have major socioeconomic and political ramifications. The human-caused climate change is driving the redistribution of species and reorganisation of natural systems, and represents a major threat to global biodiversity, according to the study.

Egypt is one of the countries expected to be affected by the impact of heatwaves. Fisheries alongside coasts are under the threat of increasing temperatures which may cause high loss of fish and other marine creatures.

According to the latest report of the Food and Agriculture Organisation (FAO), Egypt is facing the impact of rising temperatures which will lead to northwards shifts in ranges of fish species with impacts on fishery production.

The researchers quantified trends and attributes of MHWs across all ocean basins and examined their biological impacts from species to ecosystems. They concluded that multiple regions in the Pacific, Atlantic, and Indian Oceans are particularly vulnerable to MHW intensification, due to the co-existence of high levels of biodiversity, a prevalence of species found at their warm range edges or concurrent non-climatic human impacts.

Findings of the study pointed out that the 21st century has already experienced record-shattering atmospheric heatwaves, such as the 2003 European heatwave, the Australian Angry Summer of 2012-2013, and the European “Lucifer” heatwave in 2017, with devastating consequences for human health, economies, and the environment.

Smale said that his team showed that all of the well-studied MHW events, such as the MHWs observed in the Mediterranean and off Western Australia, had adverse ecological effects and that a range of organisms from plankton through corals to fish and seabirds are affected by these events.

“We showed that MHWs can impact upon ecosystem services provided to human societies. For example, species of fish and crustaceans targeted for human consumption may be locally wiped-out by MHWs, and the carbon stored by seagrasses and mangroves may be released if they are devastated by extreme temperatures,” he added.

The researchers used a variety of observational datasets to reveal the trend of increasing marine heatwaves, combining satellite data with a range century long datasets taken from ships and various land based measuring stations. They, then, removed the influences of natural variability caused by the El Nino Southern Oscillation, the Pacific Decadal Oscillation, and the Atlantic Multidecadal Oscillation to find the underlying trend.

To reach to their findings, the researchers observed trends in the annual number of MHW days and the implications for marine ecosystems globally. They incorporated existing data on marine taxon richness, the proportion of species found at their warm range edges and non-climatic human impacts to identify regions of high vulnerability, where increased occurrences of MHWs overlap with areas of high biodiversity, temperature sensitivity, or concurrent anthropogenic stressors.

The team also conducted a meta-analysis on the impacts of MHWs by examining ecological responses to eight prominent MHW events that have been studied in sufficient detail for formal analysis. During the study, the researchers examined 1,049 ecological observations, recalculated to 182 independent effect sizes from 116 research papers that examined responses of organisms, populations, and communities to MHWs.

“We also explored relationships between the occurrence of MHWs and the health of three globally important foundation species (coral, seagrass, and kelp) from three independent time series that were collected at sufficient spatiotemporal resolutions to explicitly link ecological responses to MHWs. Finally, we reviewed the literature on MHWs for evidence of impacts of these events on goods and services to human society,” said the first author.

“Our working group began in 2014, since when we have published four papers on the subject of marine heatwaves and their impacts. We started working on this particular paper in 2016, so it’s been about three years in the making,” Smale said.

Explaining the importance of the study’s findings to our knowledge about climate change and biodiversity, Smale told DNE that the frequency and intensity of MHWs is strongly influenced by manmade climate change because as the oceans absorb excess heat, they become on average warmer, so that when these events happen, they happen from a hotter starting point.

Ocean systems are facing a number of threats, such as plastic pollution and ocean acidification, but it is clear that extreme warming events can drive abrupt changes in entire ecosystems with widespread consequences. MHWs will have a major impact on the oceans in the coming decades.

About how can we protect our biodiversity from the impacts of climate change, Smale illustrated that impacts can only be minimised by combining a rapid reduction in greenhouse emissions with a more adaptable and pragmatic approach to the management of marine ecosystems.

Our international working group is still active in the research area. Our current research aims to project MHWs into the future, using climate models. This will help us better understand where impacts are likely to be the greatest. We are also developing a forecasting tool that can be used to predict MHWs over short timescales (weeks to months), which may help marine sectors, such as aquaculture and fisheries plan, ahead for these events, Smale said.