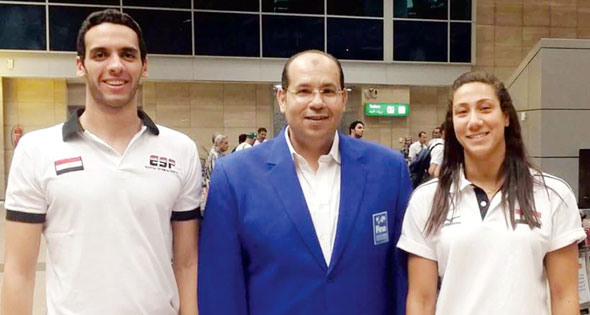 Essam Nawar, the president of the Egyptian Wrestling Federation, said that the ministry of youth and sports had approved a budget of EGP 16m for the preparation of the Tokyo Olympics 2020.

He told Daily News Egypt that the Wrestling Federation submitted a large budget request and after several reviews, the budget was set at EGP 16m, which is good and satisfactory as a preparation for Tokyo 2020.

“We have a clear plan for the players who have hopes to reap medals. We do not need to spend more money then be held accountable for the results, so we will focus on those likely to win medals,” he explained.

He added that the expenses are high, where there is a tournament in which we will participate in, in Bulgaria, with 14 players at a cost of EGP 800,000.

He pointed out that the time factor is a big crisis for the federations in order to prepare for the tournament. After many meetings, each federation received the first tranche of EGP 1m. It is hard for the federation to move alone in fear of legal accountability, in addition to the difficulty of securing hard cash due to the high exchange rate.

The federation’s plans, in terms of qualifications, are: 10 players expected to participate in the tournament. They aim to win two to three medals in the Olympics. Six names were nominated to be listed among the plan to prepare players, in accordance with the social responsibility programme, in cooperation with Talaat Moustafa, and Wadi Degla, namely Mohamed Ibrahim, Ahmed Hassan, Mohamed Mostafa, and Abdul Latif Manea, Haytham Fahmy, and Samar Amer.

Nawar said that there is a player ranked second globally: Hassan Hassan, who is being prepared by Brescia Contractors. The company spends EGP 1.3m on the player for foreign camps, aside from the salaries for him and his trainers, which significantly contributed to the player’s development.

He added that the federation has no present sponsor, despite the availability of talents worthy of support and who can achieve outstanding results, and perform well in all the world championships where they participate, which we all addressed and found no response.

On the other hand, Yasser Edris, the president of the Egyptian Swimming Federation, said the federation had no crisis in preparing for the Tokyo Olympics 2020, believing that the time was ripe for the tournament.

He explained that the players are preparing in the US by the virtue of their presence there to study through the scholarships they received because of their superior athletic performance.

Furthermore, he stated that the federation had no patron and refused any sponsorship without legal proceedings and public bidding for fear of legal accountability.

Moreover, he noted that the federation addressed the minister of youth and sports four years ago, Khaled Abdel Aziz back then, to review the offer of sponsorship of the team’s sportswear provided by Arena. The ministry has not yet responded.

He said that the federation covers its financial expenses from its revenues, which comes from the organisation of tournaments and training courses.