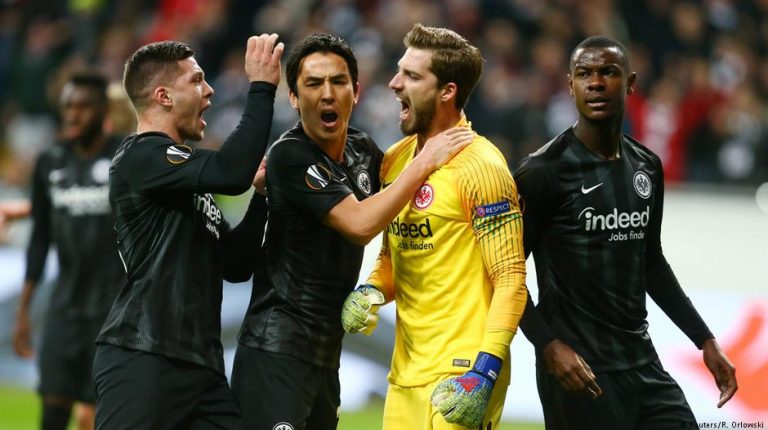 Eintracht Frankfurt delivered a memorable performance against Inter Milan in the Europa League, both on and off the pitch. A special European night might not be the last in this club’s sensational season.Marcelo Brozovic was never going to beat Kevin Trapp. Not on this night.

The German goalkeeper palmed away Brozovic's penalty effort, diving to his left to send another wave of joy rippling around Frankfurt's Commerzbank-Arena.

Even before Thursday's Europa League last 16 first leg had started, it felt like it was Eintracht Frankfurt's night. It was the latest in what has been a remarkable run in the Europa League.

The noise of the crowd was powerful, the choreography breathtaking as a city and a club rejoiced at being involved in nights like this.

"The atmosphere for the last few months here has been incredible," Trapp said afterwards. "We give it to the fans, and they give it to us, especially here at home it's something very special. … Everybody is proud of what we're doing and we're proud of our supporters because it's not easy to organize something like this."

'It makes such a difference'

Scarves were held aloft in the south stand. Flags and banners hung in the north-west terrace, where fans regularly burst into song. Even the spectators in the main stand were out of their seats faster than usual.

And then came the choreography, a celebration of the 120th anniversary of the club's founding. In a country famous for its fan choreography, this was up there with one of the best.

Organised by fan group Ultras Frankfurt 97, flyers were left on seats around the stadium explaining how the choreography was to work. The final words read: "One more wish: Let's prolong these glorious days with a few more European Cup nights. Wherever you are in the stadium: go crazy to make our dream of Baku come true."

Trapp's penalty save certainly made that dream come a little closer, denying Inter Milan that coveted away goal. The strike would have flattered the Italians, although even without Mauro Icardi and Radja Nainggolan they showed plenty of intelligence in stemming the Frankfurt press early. Their wing play also initially caused all sorts of problems for Frankfurt's back three.

With the game tense, the crowd responded again and again. Silver, red, black and gold flags were waved continuously, almost as a collective reminder of how special it was to be here on this night. It felt like a special European night, one fans remember and pass down to younger generations.

"It's amazing," said Sebastien Haller afterwards. "I heard also a lot of substitutes say they wanted to take their phones just to record it because it's crazy. Every game we play at home is a chance. … It makes such a difference. You feel, I don't know how to explain it, but you feel an extra power."

Adi Hütter's men showed just how much power in the second half, pinning Inter Milan in for a furious 10 minutes after the restart.

"Mentality," Trapp said when asked what changed in the second half. "It's one of the most important things in football. For the first 45 minutes, we didn't have that courage, that confidence. We lost a lot of balls. It was very weird. In the second half, we showed what we were able to play."

Still no goal came. Mijat Gacinovic kept trying to thread the needle, but the final pass went astray. Filip Kostic kept bursting down the wing, but his efforts were not rewarded. Frankfurt were also denied a penalty of their own when Haller was tackled in the box, after which referee William Collum booked Makoto Hasebe for his protest of the non-call and sent a frustrated Adi Hütter to the stands.

Quite quickly, Inter Milan looked tired, beaten, like a side that had succumbed to the slow beat of Frankfurt's drum. Defender Martin Hinteregger turned in a career performance, but not even he could deliver the goal this crowd so deeply craved — the Austrian was guilty of heading wide at the back post when it looked easier to score.

The absence of Ante Rebic was perhaps more noticeable than first considered as Luka Jovic and Haller, who have scored a combined 11 goals in the Europa League this term, looked one touch short of magic.

Frankfurt continued to do what they have done all season, particularly in Europe. They did not make themselves small. They did not shy away. Given that they came into the game having scored more goals (23) in the competition than any other team, they had no reason to do so.

But facing Inter Milan with a spot in the Europa League quarterfinals at stake can make reason hard to remember. Gacinovic had a go from range, super-sub Goncalo Paciencia hung up a deliciously weighted cross, but no one was there to turn it home.

No goal and no win perhaps left Frankfurt feeling a bit frustrated they waited 45 minutes to attack a side that looked there for the taking. For the fans, the truth is just being here was the joy and although players will always strive for more, they too play for nights like this. The words hung on the banners before the game said it all. "Glorious times, sad days. We are with you Eintracht, no question."

With European football breaking off script this week, there's plenty of reason to believe Frankfurt will continue that trend.

"We showed again today that we don't need to hide from anyone… If we play at 100 percent, we can beat anybody, or at least not lose," Trapp said.

Whether this adventure ends in Milan next week or not, these truly are glorious days for Frankfurt.