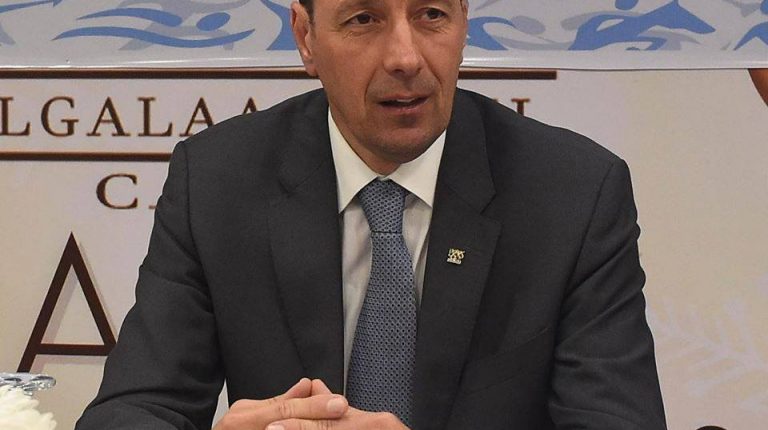 Despite the great human potential of Egypt, it only succeeded in winning 31 medals throughout its history in the Olympics. Daily News Egypt interviewed Sherif El-Arian, the secretary general of the Egyptian Olympic Committee and the chairperson of the Egyptian Modern Pentathlon Federation in order to discuss the reason behind this and the preparations for Tokyo 2020, as well as Egypt’s organisation of the World Cup of the Modern Pentathlon, the transcript for which is below, lighted edited for clarity:

Why do you think Egypt’s Olympic medals are low?

The main reason for Egypt’s lack of medals in the Olympic games is the lack of funding. Egypt has huge human resources of players and trainers, and infrastructure with high-level stadiums. If the funds are available for Egyptian sports, such as developed countries, we can easily win more medals.

How much does a player need to win an Olympic medal?

Globally, for the player to get a medal in the Olympics, the country needs to spend about $4m on them. At the Rio de Janeiro Olympics, we spent a total of EGP 121m on 121 players who qualified. There were 10 players able to compete, so winning medals is difficult.

Is there a hope for sponsorships away from the state?

Recently, private companies through social responsibility have begun to enter the field of sport. This happened through Talaat Moustafa and Wadi Degla, after the trend was in the past towards charity only. Can you tell us more about preparing for Tokyo 2020?

The Tokyo Olympics are scheduled for July 2020. The federations only received EGP 23.3m for 29 federations in January. This is such a short time to prepare and it will be difficult to hold them accountable for the results. We have to focus only on qualifying. It is not normal to begin preparing for reaping medals in this short time.

How much is the budget to prepare for Tokyo?

The budget requested by the Olympic Committee for the preparation of Tokyo, exceeded EGP 300m. We agreed with the minister recently to schedule that. But the time is not enough even if the funding is unlocked. The amount received by the federations are already spent. We suffer from excessive bureaucracy, and it is not logical that each federation gets the same amount every three months and must be settled before obtaining new tranches. Tournaments do not wait. The financial support must be secured in order to avoid impacting the federations’ plans to prepare champions. We held several meetings with Ashraf Sobhy, the minister of youth and sports, whom we call for the rapid provision of funding, because the delay affects everyone.

The Olympic Committee announced the players competing for medals two years before the Olympics. This has been the way it works since 2013. Before Rio de Janeiro 2016, the goal was to qualify 120 players in 20 games. We qualified 121 players in 22 games. Egypt aimed for five to eight medals and put a list of 16 players able to compete. But we only realised three medals, as Ehab Abdel Rahman was banned from playing, as well as Karam Gaber in wrestling due to doping. There are four players who ranked fourth to sixth and three players who were injured. The number of medal competitors dropped to 11.

For the Tokyo Olympics 2020, a year and a half ago, we announced the objectives of the Olympic Committee: 20 players competing in 10 games: judo, taekwondo, weightlifting, modern pentathlon, wrestling, swimming, athletics, archery, equestrian, and karate. The goal is to reap five to six medals.

Is the preparation for Rio de Janeiro better than Tokyo?

Preparing for Rio de Janeiro 2016 was 100 times better than the preparation for Tokyo 2020. Financial support was disbursed quickly and efficiently. There were EGP 1.5m spent without waiting in 2014 and 2015. There was a problem in 2016 due to the floatation of the currency, which still continues today.

Have you received support for the Youth Olympics in Buenos Aires?

At the Youth Olympics held last summer in Buenos Aires, the Egyptian Modern Pentathlon Federation spent EGP 2.5m on the preparation of the players. It did not get a single pound from the ministry, yet realised two gold medals. This sum was spent on eight players, of which Ahmed El-Gendy and Salma Ayman who qualified for the Olympics.

How do you see the sports atmosphere in Egypt?

The atmosphere has become unhealthy in the Egyptian sport because of constant problems. I decided not to pay attention to such things. Everyone has to keep away from personal interests and to look for the benefit of sport. It is just voluntary work and does not need all these polemics.

Is there hope to back down from preventing Zamalek from hosting its matches?

Zamalek is a big entity, and of course the club is influenced by what happens with its president, whatever happens. The decision was not arbitrary, and all the rules and international laws were enforced. We set up a hearing committee of judges at the highest level. The president of Zamalek refused to attend. The decision came to protect the players and the referees from problems. A recent game saw this happen before the Basketball Federation enforces the committee’s decision and bans the team from hosting games.

What is the reason behind Egypt’s recent and frequent hosting of world championships?

Egypt has a unique infrastructure in all the Olympic games, which qualifies it to host the biggest tournaments in the world. We only lacked a bicycle track, which is currently being set up in Cairo Stadium. The state is currently hosting the World Championships during this period for two main reasons. The first is political, through which we aim to convey a message to the world that Egypt enjoys stability and security in the current period, and to stand for attempts by some foreign media to defame Egypt’s image in the world and to emphasise that what it conveys is not related to reality. The second reason relates to sports: to save the state budget from bearing travel costs and give the players the chance to reap experience by participating more without being limited to a specific number of players. According to the tournaments’ bylaws, the hosting country gets the opportunity to involve more players. Moreover, the federations can achieve profits by marketing them with sponsors and can spend on their players, as the state cannot provide all the financial demands of federations.

How much is the budget for the Pentathlon World Cup?

The estimated budget of the Modern Pentathlon World Cup in March is estimated at EGP 4m. This is not high, as the federation can cover its costs and make EGP 1m of profits by marketing the championship with sponsors. It is a tournament of eight organised by the Modern Pentathlon World Federation every year. Since 2014, we organised two tournaments, which was a big achievement. In 2020, we will organise a similar tournament. We are always keen on trying to host games to keep Egypt in the league.

How many sponsors are there for the 2019 Pentathlon World Cup?

We have recently signed a new sponsorship contract to bring up the total number of sponsors to 12, including the ministry of youth and sports and the Tourism Activation Authority, as well as Al Ahly Real Estate Development, which will host the games on its pitches in the Platinum Club in the Fifth Settlement.

Do you have sponsors of the federation?

The National Bank of Egypt sponsors a number of successful federations and players, including the Modern Pentathlon with EGP 250,000 to 2m. The EGP 1m sponsorship agreement ends this month. We are negotiating to increase the sponsorship to EGP 2m after the success of the game now and winning two gold medals in the Youth Olympics in Buenos Aires. The state supported the World Cup with EGP 250,000, following the success of the federation, which was an annual contract. We hope in the future there will be long-term sponsorship agreements not for just one year.

There is also the Absolut for Fencing Gear company, which provides clothing and equipment with a financial value of EGP 3.5m for three years ending in 2020.

Are there sponsorship contracts for players?

There are offers for a number of players provided by companies for their care, which are now being studied, as this is subject to the bylaws organised by the federation to avoid conflict between the sponsors of the federation and the players. It is not acceptable for a player to market a company competing with the company that sponsors the federation. The players are aware of all matters and do not move without talking to the federation, given that the game has become attractive to sponsors, as the players have been reaping World Cup titles and are nominated for Olympic medals in Tokyo 2020.

How much is the sport ministry’s budget for the Modern Pentathlon Federation?

Are the players’ families involved in covering the financial cost of games?

Did you have the thought to establish an investment company?

With the existence of the investment clause in the new Sports Law, the Modern Pentathlon Federation was the first to decide the establishment of an investment company, but the law provides for trade by benefiting with a profit margin, which is not attractive. The federation though there will be production through manufacturing, but the current law does not allow this. The federation is looking into amending this. As the sport is intertwined with five more games, so there is a chance for cooperation.

How do you see the new Sports Law?

The new sports law is the best thing that happened in the past period. The Egyptian sport was about to become halted. The International Olympic Committee granted Egypt a period starting from 2008. The response was to ask for a delay for compelling circumstances, until it came to the Olympic Committee to confirm that Egypt is the only country in the world that has taken benefits of all the extensions provided to it in order to adjust its conditions in accordance with the Olympic regulations.

The new law has more consensus of about 90%. Some items will be modified in accordance with international laws. The item on investment set by the ministry of investment.

How do you see the future of the pentathlon in Egypt?

We are working hard to achieve more achievements, and we are not stopping at winning all tournaments. Maintaining this is not easy. The world looks at Egypt and learns from us. For instance, 30 countries participate in the World Cup, including 10 countries which came early to Cairo and asked to camp with us to learn how we reached these achievements. Some look at the federation as ideal, but we do not see this. There are mistakes and we exert efforts to fix them. For instance, there was a mistake by an employee last year that resulted into the players missing their visas to participate in the World Cup. The federation had to send younger youth. Even though the players reaped the World Cup, it was a mistake.

What do you recommend to other federation officials?

It is rumoured that Egypt is only good in combat games, which is not true. Work and scientific plans can bring Egypt’s domination over the world. The modern pentathlon achievements are the results of a nine-year plan.