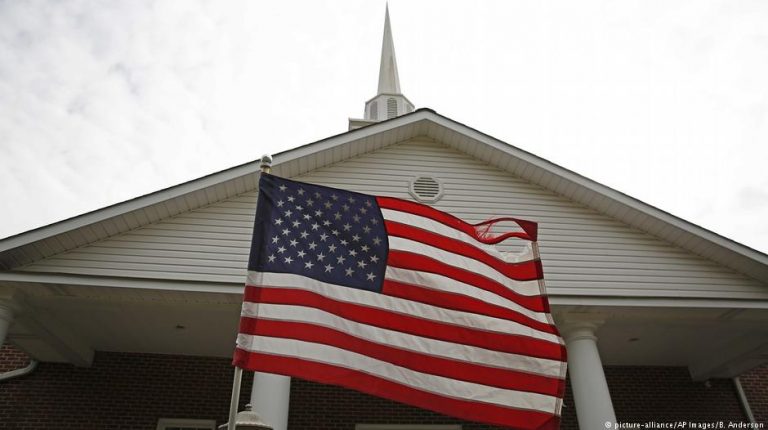 Conservative Christians have long opposed climate science, saying human induced warming goes against God’s omnipotence. Opinions divide on whether that thinking might slowly be changing.When Reverend Mitchell Hescox organized an environmental stewardship conference for evangelical Christians in Missouri in 2014, only five people showed up. This past September, he said, the same conference attracted 500 attendees.

"We're seeing a remarkable changing of the times," Hescox told DW, adding that although many evangelicals are still dismissive of global warming, "a growing number are "getting behind climate science."

Hescox is also president and CEO of the Evangelical Environment Network (EEN), one of the largest evangelical groups in the US. Ten years ago, it had some 25,000 members, now it comprises "4 million pro-life Christians."

For more than two decades, the EEN has been educating members to care for everything it believes to have been created by God. One of its main missions has been convincing evangelicals to recognize climate change as something that's increasingly impacting their own lives.

"Climate change isn't just about polar bears. It's about our children's health. It's about our life now and in the future," Hescox said, adding that it poses several risks in the US.

Apart from the increased frequency of extreme weather events, the Washington D.C.-based Environmental Protection Agency (EPA) says rising temperatures in the Midwest and eastern US have caused a rapid increase in the population of ticks that can transmit Lyme disease.

In addition, findings from the University of Washington in Seattle suggest corn production could fall by around 50 percent by the end of the century if greenhouse gas emissions remain unchecked; and the American Lung Association says higher levels of CO2 are also contributing to lung disease and respiratory problems.

According to a 2015 Pew Research poll, more than a quarter of the US population identifies as evangelical or born-again Christian, people who generally interpret the bible literally and tend to be very socially conservative. Largely white and transdenominational, they're much more likely to be Republican than Democrat.

A different Pew poll in 2016 found that 81 percent of evangelicals and born-again Christians voted for President Donald Trump. Though, in large part, that trend could be attributed to his stance on abortion and gun control, he also used his campaign to tap into a long tradition of Republican antipathy to environmental issues.

And since taking up office, he has pulled the US out of the Paris Climate Agreement, which aims to limit global warming to 1.5 degrees Celsius over pre-industrial levels.

This January, however, an NPR/PBS/Marist survey found only 66 percent of white evangelicals now approve of Trump's presidency, down from a 73 percent rating in December.

The drop in support comes after the longest partial government shutdown in US history, the separation of migrant families at the US-Mexican border, and as Trump continues to deny global warming even though a clear majority of Republicans currently acknowledge it is happening.

At the end of last year, the president went on record saying he didn't believe his own government's findings on the potential economic impacts of unchecked emissions.

Changing evangelicals' minds, Hescox says, could have a significant impact on advancing environment-friendly climate policies. Though he concedes they aren't about to jump to the Democratic Party, he believes they are now more likely to pressure their Republican representatives to adopt a more forward approach to the problem.

Katharine Hayhoe, an evangelical, atmospheric scientist and political science professor at Texas Tech University in Lubbock, also says she sees attitudes changing. She says this could have something to do with certain solutions proving business-friendly.

"There's been a massive expansion of clean energy across the middle of the country. We have 30,000 jobs in Texas with solar energy," she said.

"Very conservative farmers, who would rather cut off their arms than let the government impose regulations on carbon emissions, now have wind turbines on their land. And a check arrives in the mail. So they're like, 'oh, ok, there's no problem with that.'"

But David Konisky, associate professor at the School of Public and Environmental Affairs at Indiana University, says he sees no sign of evangelicals budging on climate policy. On the contrary.

"My analysis of US Gallup public opinion polls does not indicate any widespread 'greening of Christianity' among evangelical Protestants or other Christian denominations," he said in an interview with DW.

"Over the time period I studied (around 2000-2015), there is evidence of declining levels of environmental concern."

The beliefs behind climate change denial

This dismissal of climate science could be explained in a number of ways, says Kyle Meyaard-Schaap, National Organizer and Spokesperson for Young Evangelicals for Climate Action (YECA), a group that has been educating younger people on how just much the Bible talks about caring for the environment.

While some see global warming as part of God's plan or even as a sign of the end of the world, as prophesied in the book of Revelation, others point to a passage in the book of Genesis that says humans should have "dominion" over the earth.

The interpretation of "dominion" has historically divided Christians into those who interpret it as the need for God's followers to take responsible stewardship of Earth, and those who understand it as humans having absolute command over all things on the planet.

Evangelicals have also contributed to the growing partisan divide in the US in recent decades, Meyaard-Schaap explained, and have historically opposed climate science out of a fear of liberal government solutions.

"Climate change has effectively been polarized. Many Christians in the US have come to the conclusion that supporting climate action must also mean supporting other liberal and socially economic positions," he said, in reference to issues such as abortion rights and same sex marriage.

"This would mean betraying their values and turning their backs on their communities."