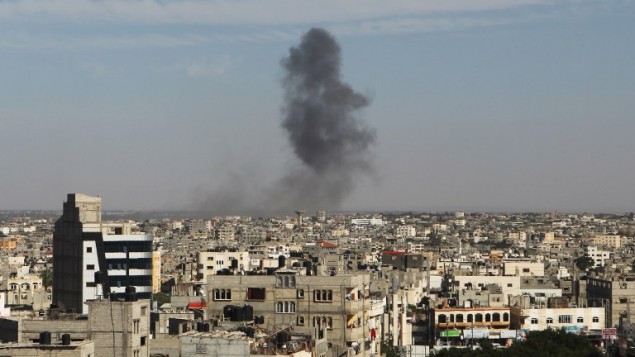 According to WAFA, the Palestinian news and information agency, Israeli forces carried out air strikes by F16 air jets on three positions in Gaza, causing damages to Palestinians properties.

In addition, according to Palestine Prisoner’s Society (PPS), Israeli forces have abducted four Palestinian men from the Jenin refugee camp, as well as detained a security guard who works in Al-Aqsa Mosque. This comes a day after abducting another guard while leaving the holy site.

The Israeli Defence Force (IDF), held Hamas responsible, in a statement, for what happens in Gaza, arguing that the Israeli attacks are a response “for the cluster of two balloons carrying an explosive device which launched into the Israeli territory early on Tuesday.”

The IDF added that they will not stop the strikes against Hamas.

On the other hand, the Hebrew speaking Walla website commented on the Israeli attacks questioning whether the Israeli strikes are enough to deter the allegedly Hamas-led balloon attacks.

“The IDF responded several times to Hamas’s actions, but this did not lead to deterrence and did not succeed in doing damage [to Hamas],” the newspaper said, adding that the Israeli attacks did not so far convince Hamas to stop the “balloon attacks”.

The newspaper further added “the violent demonstrations on Fridays are still ongoing and will continue until further notice,” citing the ongoing arrangements for protests to commemorate the Great March of Return.

Moreover, The Jerusalem Post newspaper reported that the IDF is trying to reach the best settlement to control the situation regarding the expected protests. “Israeli defence officials have been examining ways to improve the dire humanitarian situation in the Gaza Strip in an effort to avoid a violent escalation that could lead to another deadly war,” the newspaper said.

The commemoration of the first anniversary of the Great March Return will take place on 30 March.

On 30 March last year, hundreds of Palestinians went through the streets of the Gaza Strip near the Israeli border protesting against the Israeli occupation forces, and demanding the return to their land which they were displaced from, and since that day, over 250 Palestinians were killed by Israeli army gun fire.

All over the year, Gaza witnessed several air strikes and many abductions and also saw thousands of protests on a weekly basis where participants tried to pass through the fence.