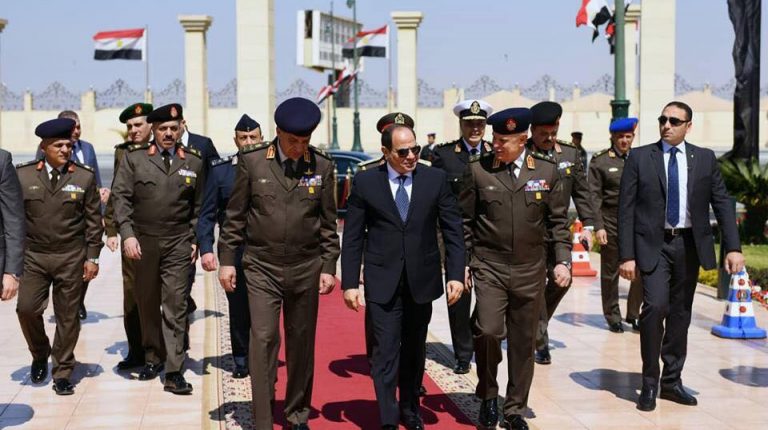 The meeting was held as the country and the armed forced celebrated the Martyrs’ Day on 9 March, which began with observing a minute of silence for the martyrs of the army and police personnel.

Al-Sisi discussed the development of the situations of national, regional and international levels, and the efforts regarding security in North Sinai, as well as securing Egypt’s borders.

Furthermore, Al-Sisi praised the efforts of the armed forces and the police to preserve the country and their efforts in supporting the pillars of stability and development.

In a similar context, the Minister of Military Production, Mohamed Al-Assar, sat down on Friday with the German Parliamentary State Secretary, Thomas Silberhorn, to discuss means of enhancing bilateral cooperation between the two countries.

They discussed during the meeting the cooperation between military production companies and Bombardier Inc in railway manufacturing as well as KSB for pumps and valves in the field of operating solar water wells.

The delegation praised Al-Assar’s meetings with German companies in Munich in July 2018, where he inspected the production lines of these companies to learn about the latest technology used in manufacturing.

Meanwhile, they commended his visit with a ministerial delegation in January where he met officials and German companies working in the field of waste management in order to benefit from their experience and transfer it to Egypt.

Al-Assar asserted that the ministry is contributing with various entities, private sectors, and foreign companies in implementing national projects within the framework of Egypt’s Vision 2030.

Silberhorn praised the potential and resources which the companies of the military production have from technology, technical, and human resources.

He also mentioned that there is bilateral cooperation between the two countries in various fields, and that he is seeking to boost cooperation with military production companies from this visit.