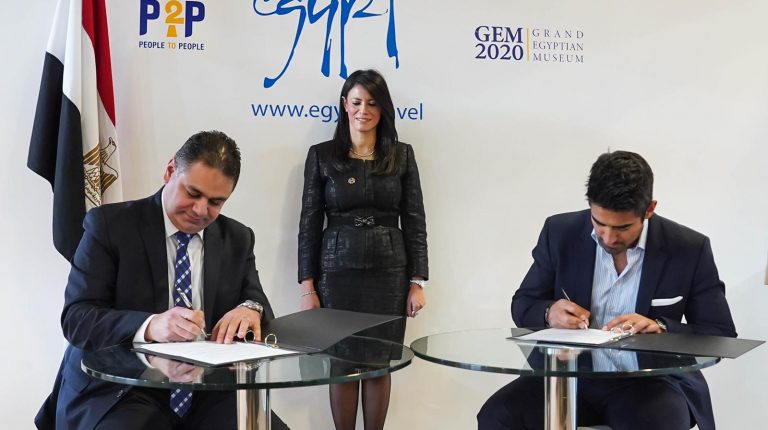 The Chairperson of the Egyptian Tourism Authority, Ahmed Youssef, signed a cooperation protocol with Jeremy Jauncey, the founder and CEO of Beautiful Destinations, with the aim of promoting tourism to Egypt.

The protocol stipulates the preparation of the strategy which will be used in preparing and shooting the promotional content of marketing to Egypt worldwide, as well as executing over 40 promotional and marketing content for various tourist areas in Egypt.

The Minister of Tourism, Rania Al-Mashat, witnessed the signing ceremony during the ITB Berlin activities, which is taking place during the period from 6 to 10 March.

For her part, Al-Mashat highlighted the importance of this protocol in updating and modernising the ways and techniques of promoting tourism, which is a main pillar in the national structural reform programme for the tourism sector.

She mentioned that the traditional ways for promoting tourism have become ineffective and useless, explaining that social networking websites now have a stronger impact on youth.

Al-Mashat added that this partnership came after holding intensive meetings with the company, during which she presented a detailed view for the ministry’s target to the company, in view of the structural reform programme.

Furthermore, she also noted that the ministry targets to shed light on tourist areas that are unknown to tourists, thus Beautiful Destinations will help the ministry in achieving this target as it is specialised in promoting tourism using modern and non-traditional marketing mechanisms through electronic platforms.

For his part, the Founder and CEO of Beautiful Destinations expressed his happiness by this partnership, noting that his company is considered as one of the largest companies worldwide specialised in promoting tourism, explaining that 20 million people from more than 180 countries visit the company’s page on Instagram, Facebook, Snapchat, YouTube, and Weibo.

Jauncey added that his company believes in the importance of tourism as an engine for countries’ economic development, mentioning that the company is committed toward implementing the concepts of sustainable development in line with the vision of the Egyptian Ministry of Tourism.

On the other hand, during the participation of Egypt in the ITB Berlin activities, the minister of tourism met with her Greek and Cypriot counterparts, Elena Kountoura and Savvas Perdios respectively, with the aim of discussing ways to enhance the cooperation in the tourism field.

During the meeting, they discussed reinforcing the trilateral cooperation and agreed on forming task forces from both the governmental and private sectors in order to create joint tourist schemes with the aim of attracting more tourists.

Moreover, they also agreed that the three countries will participate in international exhibitions specialised in cruise tourism during the coming period, such as the Posidonia Maritime Transport Exhibition.

Finally, the three ministers praised the political and economic relations binding the three countries, expressing their keenness to increase cooperation in tourism among them.