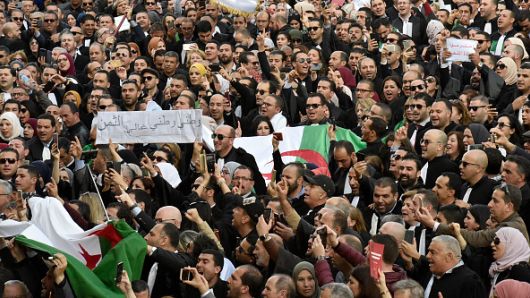 Thousands of Algerians took to the streets of the capital for the third consecutive week on Friday to protest against the candidacy of President Abdelaziz Bouteflika for a fifth term.

This came one day after Bouteflika warned Algerians on Thursday against domestic or foreign groups infiltrating or breaking through their marches.

The Algerian authorities halted train and metro services in the capital Algiers on Friday, ahead of expected protests against Bouteflika.

“We have seen a number of our citizens coming from various parts of the country demonstrating to express their views peacefully, and we have found satisfaction in the maturity of our citizens, especially youth,” said Bouteflika.

Bouteflika, who is seeking to run for a fifth term after 20 years of ruling the country, stressed that he wants to continue to “maintain stability and the building and construction to register more victories and progress,” without mentioning the demonstrators’ demands.

The 82-year-old leader has been in Switzerland since late February for medical reasons. Bouteflika, who was recently wheelchaired, has been ruling Algeria since 1999. He always addresses the people via video conference, and is rarely seen in public after suffering a brain stroke in 2013.