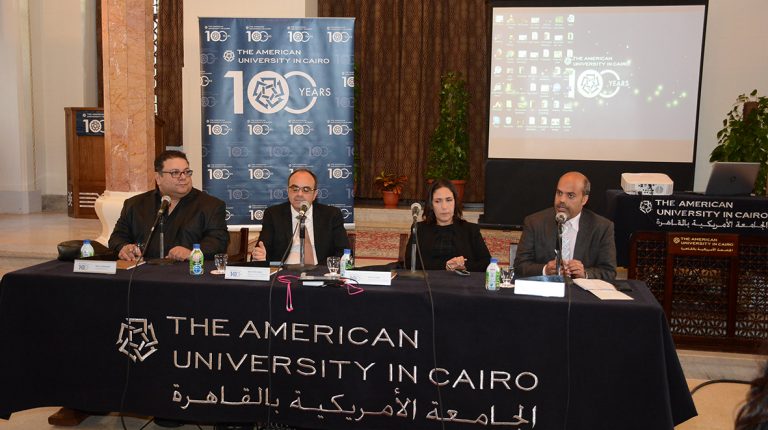 When hundreds of thousands of Egyptians filled the streets a century ago demanding freedom from the English colonisation, they were not aware that each footstep they took on every street carved the history of Egypt’s recent history, through the country’s biggest and most effective revolution in 1919. Commemorating the golden days, when marches were united under the umbrella of seeking freedom, the American University in Cairo (AUC) held a cultural celebration where the revolutionary artists’ and their work was revived.

The event, which was held on Saturday, witnessed a musical concert in which the prestigious university’s professors revived the songs of the revolution’s icon, Sayed Darwish, in their original forms and exactly how they were performed, and held a discussion panel in which the speakers talked about the details of the revolution. This came besides an art exhibition featuring the work of the AUC’s graphic design students in which they documented the 1919 Revolution through the visual effects they added on some of the rare pictures which are kept at the university’s Rare Books and Special Collection Library.

The celebration comes in light of the AUC’s centennial celebrations which started from early February.

“We have been preparing this project for 10 months. Art was the only tool that the occupation could not control or invade,” said Alaa Eldin Edris, the AUC’s associate provost for research, innovation and creativity.

Edris explained that focusing on bringing Sayed Dawrish’s songs back to life the way they were originally written and performed is the AUC’s way of reviving his legacy and depicting the main tool the masses fought the occupation with.

“At the time, British soldiers killed every person walking down the street who was calling the name of Saad Zaghloul [the revolution’s icon], but they could not shoot any of the people who were marching while singing Sayed Darwish’s songs, even the ones referring to him. We focused on art, as it was the Egyptians’ main tool of fighting the situation,” he added. 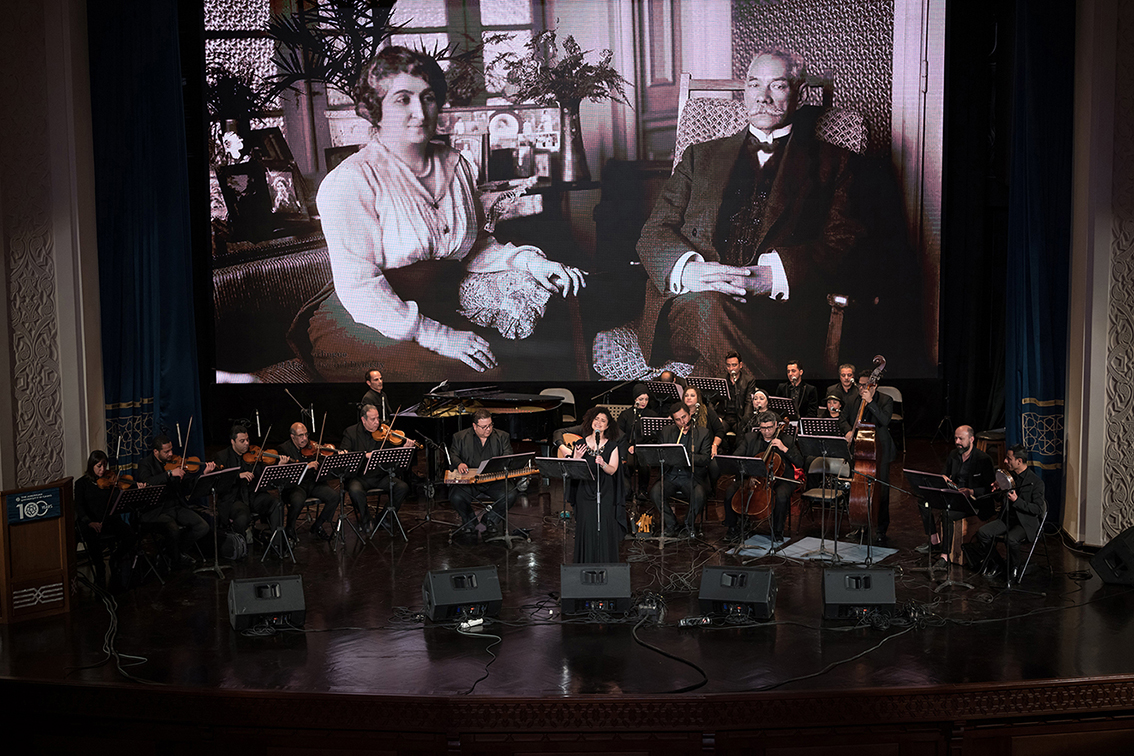 The concert was performed by Eskenderella with its lead singer Hazem Shaheen, and the AUC Ferqa with lead singer Nesma Mahgoub.

In two hours, Mahgoub and Eskenderella captured the audience’s hearts, and took them back in time to the previous centenary through some of Sayed Darwish’s most famous songs featuring the 1919 Revolution.

Darwish is a veteran artist, who is known to be the only art icon of the 1919 Revolution, and the one whose songs played a remarkable role in sparking the revolutionary anger inside Egyptians at the time.

“For six months, we have been digging to find the original notes of Darwish’s revolutionary songs, which were extremely hard to find due to rare written documentation of musicals at the time,” said Wael El Mahalawi, an associate professor at the AUC’s Department of the Arts.

El Mahalawi explained that the difficulty was in finding the songs’ original notes, and how they were originally performed without the additions and amendments that occurred over the years with every artist who performed the songs after.

“The way we listen to songs nowadays is much different that the way they were originally played. Documenting musical notes through writing them only started few years ago. Before that, it only relied on listening and practicing them. To find the notes of a song which was performed over 100 years ago, was impossible,” he added. 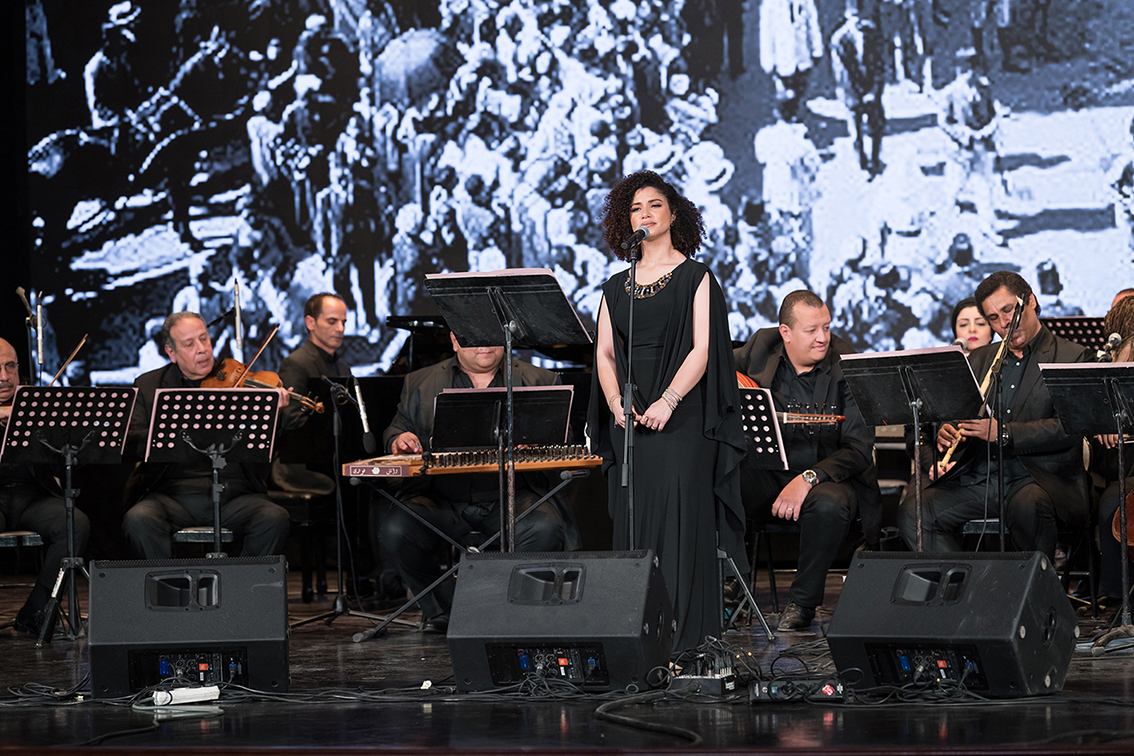 Searching at the Bibliotheca Alexandrina, and the Cairo Opera House, the team could only find the national songs through gramophone vinyls.

“We kept on listening to the 23 songs and writing the notes ourselves in order to perform them the exact way they were played with, before any amendments,” El Mahalawi pointed out.

The project focused particularly on Sayed Darwish’s songs, because Darwish was the singer who chronicled the journey of the nation in every stage through his songs.

Through her angelic voice, Mahgoub revived Shed El-Hezam (Buckle up), Oum Ya Masry (Egyptian, Rise), and Aho Da Elly Sar (This is what has come to be)

The event also witnessed a discussion in which Mohamed Abou El-Ghar, the professor of gynaecology at Cairo University and political activist recalled the memories of the revolution, and  Mostafa El Feki, the director of the Bibliotheca Alexandrina discussed how it affected Egypt’s foreign  political scene, and  Sania Sharawi, novelist and the granddaughter of the feminist and women’s rights activist Huda Sharawi discussed  the impactful role of women at the 1919 revolution

What tactics are set to be employed by Egypt’s various political movements?

Where does the Army stand in the struggle between those with money and those with power?

Mahfouz literary award given to the January uprising