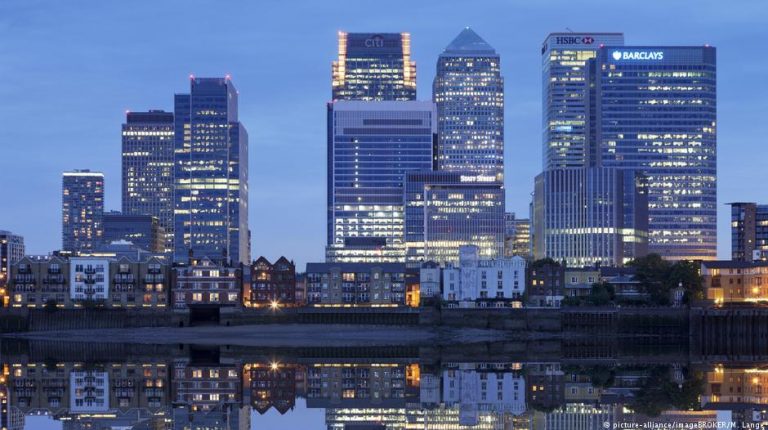 Amid uncertainty over a “no-deal” Brexit, a report shows banking and finance firms are moving more assets and staff from Britain to the EU than previously thought. Dublin and Frankfurt are among the top destinations.A report released by a London think tank on Monday said that 275 financial firms are in the process of transferring a combined $1.2 trillion (€1.06 trillion) worth of funds, assets and staff from Britain to the EU. The "Brexitometer," published by the New Financial think tank, said that the moves are an "inevitable consequence" of the "political circumstances" surrounding Brexit.

Although the City of London's dominant position as a global financial center remains intact, the report highlights that Brexit has forced financial firms to prepare for whatever regulatory environment will emerge between the EU and Britain as Brexit negotiations continue.

"We expect the headline numbers to increase significantly in the next few years as local regulators across the EU require firms to increase the substance of their local operations," the report said. "Other European cities will chip away at London's lead over time."

The majority of the relocations, numbering at 100, are heading to Dublin, which could become a post-Brexit hub for high-profile asset management firms such as Goldman Sachs and Morgan Stanley Investment Management. Luxembourg was the second-highest on the list with 60 relocations; Paris came in at 41, Frankfurt at 40 and Amsterdam at 32.

The combined cost of conducting the transfers for firms is expected to be around $4 billion (€3.6 billion). The report also estimates 5,000 staff are being moved or hired locally in EU countries in response to Brexit, with this number expected to climb.

Banks and investment banks alone are thought to have transferred nearly 800 billion pounds ($1.3 trillion, €923 billion) in assets out of Britain to the EU, which amounts to 10 percent of total banking assets in Britain. The think tank added that this estimate comes from only a small proportion of firms that have already reported what they are moving.

Read more: Has Brussels pushed Brexit talks to the brink?

"Business will continue to leak from London to the EU, with more activity being booked through local subsidiaries," William Wright, founder and managing director of New Financial, told the Reuters news agency, adding that the UK's influence in European banking and financial services would be reduced.

The report also shows that these asset and personnel transfers are not limited to one EU hub, but are spread out across sectors and firms, with many of them diversifying their businesses and choosing separate cities and hubs for different divisions. EU cities are poised to be niche destinations for firms moving operations out of Britain to the EU.

Frankfurt, the EU's banking center and home to the European Central Bank, looks like a top choice for banks moving out of London. An estimated 90 percent of relocations to Frankfurt are banks.

On Tuesday, British lawmakers are due to vote on Prime Minister Teresa May's amended Brexit deal with the EU. If they cannot agree on a deal, Britain could leave the EU on March 29 without any transition period. New Financial said that the "breadth and depth" of the relocations means the British financial industry is "well prepared" for any Brexit outcome.