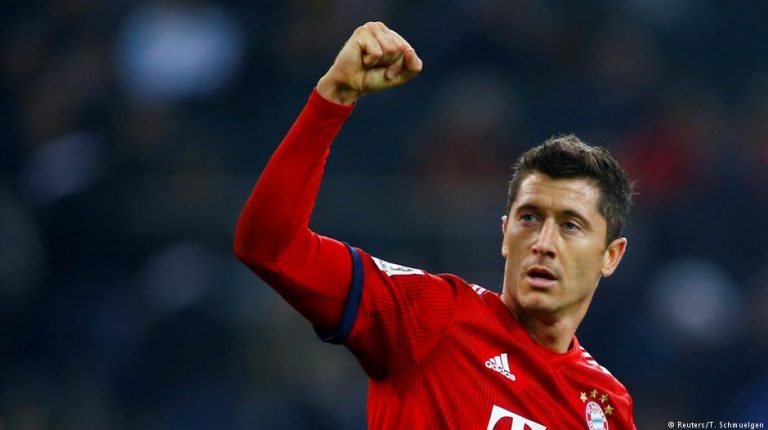 Robert Lewandowski has been in top goalscoring form, but came up short against Liverpool in the first leg of the Champions League last 16. Bayern Munich need their frontman at his best to keep their European hopes alive.When it comes to scoring goals, few are better than Robert Lewandowski right now.

The Polish striker is currently the top scorer in both the Bundesliga (17 goals) and in the Champions League (8 goals). In Europe's top five leagues, only Lionel Messi has scored more goals (34) in all competitions than the Bayern Munich man's 29, and Lewandowski has scored four goals in his last two league appearances.

But his performance against Liverpool in the first leg of the Champions League last 16 tie is a reminder of how much he has struggled in the big moments in recent years. In fact, Lewandowski hasn't scored a knockout goal in his last 505 minutes of action, since a 5-0 hammering of Besiktas last year.

With Bayern facing a season-defining second leg in Munich's Allianz Arena on Wednesday, the German side will need its No. 9 at his best to keep their European hopes alive.

Despite failing to score in five of Bayern's six Champions League knockout games last term — including both legs of the club's semifinal against Real Madrid — Lewandowski has one of the best goalscoring records in that stage of the competition.

His 19 career goals in the knockouts leave him tied with teammate Thomas Müller for the third best record in the competition, behind only Lionel Messi (22) and Cristiano Ronaldo (47).

He has also scored in big spots for Bayern in the Champions League before. His goal in the second leg of the club's last 16 tie with Juventus in 2015-16 sparked a comeback after the Bavarians trailed 2-0 (4-2 on aggregate) at halftime.

But more often than not since he's been at Munich, his goals have come either too late — like his strike against Barcelona in the 2014-15 semifinals or the one against Atletico Madrid at the same stage in 2015-16 — or in blowouts — like his two goals in separate 5-1 wins over Arsenal in 2016-17 or that brace against Besiktas.

His current six-game goalless stretch in the knockouts is especially concerning when you include the fact that he has had two shots or less in four of those contests. Against Liverpool last month, he had just one shot, which came in the opening minutes, and touched the ball only 34 times.

Many factors will be working against Lewandowski when the Merseyside club visit the Allianz Arena on Wednesday.

For starters, Müller, one of the Polish striker's favorite running mates, is suspended while wingers Arjen Robben and Kingsley Coman, often responsible for setting up chances for Lewandowski, are both still out injured.

But the Bavarians need the Polish international to be at his best as he is a big reason why the club's form has improved lately. Lewandowski has 12 goals and seven assists in Bayern's 16 games since the beginning of December, Bayern have lost just one of those matches.

"We all, especially I, have the dream that we will the Champions League again. With a goal from Robert in the final," Karl-Heinz Rummenigge, Bayern's CEO and a former striker himself, told kicker.

Wednesday's showcase will be an opportunity for Lewandowski to show that he is one of the best strikers in the world. A knockout punch against Liverpool would certainly reassert that claim. But another drab performance will suck a lot of significance out of his impressive goal tally.