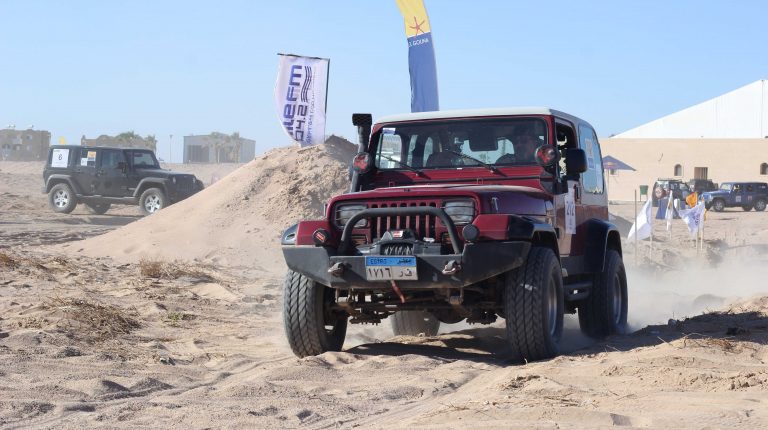 While HammerHead Racing came in second, led by Sherif Abdel Azim and Co-Pilot Ahmed El-Mehi. The third place was secured by Trax, led by Khalid Sobhi and Hady Makhlouf.

Early Saturday morning, the teams started from El Gouna to the starting line of the second phase, which will extend 240 km in the heart of the Eastern Desert, and will take about 4 hours.

Tamer Bashir, the Sahara Racing Team’s main driver, said the first round of the El Gouna Rally was tough, as the team tried to preserve the cars to withstand the second round, the largest and most difficult 240 km.

He also stressed that the team developed a strategy to protect each other’s team cars during the second phase, as cars were launched behind each other to maintain the safety of all team members and assist each one of them in case of emergency.

The captain of the TMT team, Mohamed Al-Entebli, explained that the team had achieved very good timing in the first stage.

Mohammed Al-Gayyar, the team’s co-pilot, confirmed that they had made great tours and praised the performance of Al-Entebli.

Noteworthy, this is the first rally to be played by captain Al-Entebli after a break from the rally world for 6 years.

El Gouna Rally will witness the participation of the 4×4 Challenge, which was introduced for the first time in Egypt at Sahl Hashish Rally in 2017.

The rally is supported by the Red Sea governorate, the ministries of defence, interior, tourism, environment, and the Automobile and Touring Club of Egypt, according to Rally Egypt’s official Facebook page.