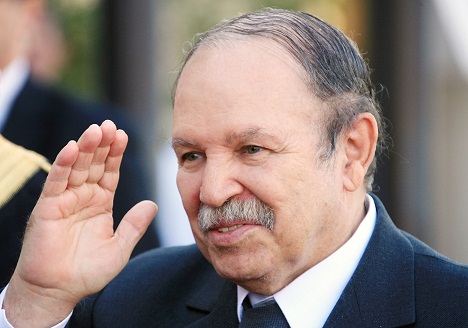 Thousands of Algerians took to the streets in several squares refusing Algerian President Abdelaziz Bouteflika’s announcement to postpone the April 18 presidential elections, considering it an extension to his fourth term, on Tuesday.

Bouteflika announced that he would not consent to the April 18 presidential elections, and that it will be postponed, on Monday.

Bouteflika said in a statement, according to the official Algerian Press Service, that he would reshuffle his cabinet, and that the elections delay is for the purpose of a comprehensive national dialogue.

Despite Bouteflika’s announcement, people and students refused his decision, and took to the streets chanting “students steadfast, rejecting extension,” and they have replaced the banners they were holding instead of rejecting fifth term to “+4” crossed out, and demanding an immediate political solution.

Additionally, they are calling for a peaceful demonstration on Friday after Friday prayer, rejecting the extension.

Similarly, Algerians gathered in the streets on Monday, after Bouteflika’s statement, to celebrate that he would not run for a fifth term.

“I will not run for a fifth term, no doubt about it for me,” Bouteflika said, adding that his age and health, only allow him to contribute with the Algerian people to reform a new republic.

Bouteflika bowed after three weeks of protests, which took place after he declared his intentions to stand for a fifth term, however, due to his poor health condition, he refused to hand over power.

Bouteflika has been in charge for 20 years, and has been suffering from a stroke since 2013, and he has rarely been seen in public since then.

The 82-year-old president ruled for two decades. The first two terms he was glorified due to his efforts to bring back safety and stability to the country following the bloody Algerian civil war in 2002, and his role in ending the Emergency Law.