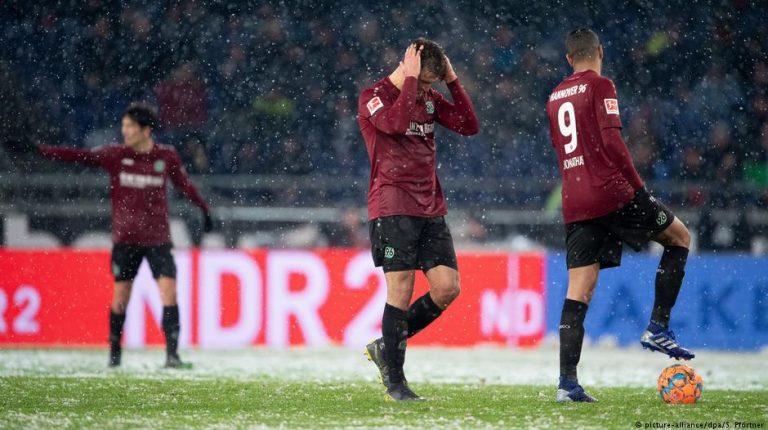 The snow saved Bayer Leverkusen and denied luckless Hannover as the Bundesliga moved towards the final straight. At the top, Bayern Munich and Borussia Dortmund won in contrasting styles but the champions have the lead.Good week for: Werder Bremen, the title race, Robert Lewandowski, Kevin Volland, Andrej Kramaric

– Schalke might have lost 4-2 against Werder Bremen, but there was enough improvement in the performance (perhaps thanks to Breel Embolo's return after four-months ending in a brace) for the club's new sporting director Jochen Schneider to believe Domenico Tedesco should stay in the job. Schalke certainly battled for their head coach, but there seems to be no escaping that too many of them still don't look good enough. The loss of Daniel Caligiuri to a potentialy season-ending injury won't help, but Tedesco lives to fight another week at least. Bremen, in the meantime, stay in the hunt for Europe and are enjoying life under Florian Kohfeldt.

– With both Bayern Munich and Borussia Dortmund winning, the Bundesliga title race continues to be thrilling to watch. Bayern strolled to victory against Wolfsburg, shooting themselves into form ahead of Liverpool by winning 6-0. Dortmund labored to their 3-1 victory against Stuttgart, but three points are three points. Bayern are now top by two goals with nine games to go. It's set up nicely.

– Freiburg got an enormous victory against Hertha Berlin at home on Saturday after Vedad Ibisevic went from hero to zero. The Bosnian striker equalized late in the second half, but four minutes later headed into his own net to give Freiburg the win. Christian Streich was overjoyed, but the afternoon was soured somewhat for the Black Forest club after Lukas Kübler broke his ankle in an accidental collision with his captain Mike Frantz.

– Sunday was a day of doubles as first Hoffenheim's Andrej Kramaric then Bayer Leverkusen's Kevin Volland bagged braces in 2-1 and 3-2 wins respectively. Both men are now in double figures in this Bundesliga season and Volland has found the sort of form that saw him win 10 Germany caps between 2014 and 2016. With a dearth of German strikers at the moment, could the 26-year-old get the chance to wear the Germany shirt again later this month?

– Once again, the bottom three lost and are starting to be cut adrift. While Stuttgart put in a gritty effort against Dortmund and Hannover made a fist of it at home to Leverkusen, Nuremberg were second best throughout against Hoffenheim. All three clubs are running out of time and Hannover's trip to Augsburg next weekend looks critical.

– Monday night saw more protests against unfriendly kick-off times in the Bundesliga as Fortuna Düsseldorf hosted Eintracht Frankfurt. The away fans boycotted the first half completely, while Düsseldorf's ultras stayed away for the first 15-and-a-half minutes. Frankfurt won the match 3-0, taking them to within three points of a Champions League place. They are yet to lose in 2019.

"I don't think I've experienced a more emotional moment in football than today."

“Sometimes it looked like a comedy.” Bayer Leverkusen goalkeeper Lukas Hradecky on the snow-induced chaos at Hannover (see The Weird).

"They parked a gigantic bus."

"The manner in which they converted it [their disappointment] into positive energy says a lot about them as players, as people and characters. Hats off to them."

— Niko Kovac, Bayern Munich's coach, on the performances of Thomas Müller, Jerome Boateng and Mats Hummels after being told their Germany careers were over.

"We died of beauty in the first half of the season at times. Today we defended really well, and in attack [Peter] Gulacsi makes one great save. That's how you pick up points and that's important for us."

"I also scored an own goal in my career. In an international game in my home town. My home city was there because of me. Life goes on."

— Pal Dardai on Vedad Ibisevic's own goal, the first of his career

With his brace against Wolfsburg, Robert Lewandowski is now the all-time leading foreign goalscorer in the Bundesliga with 197 goals.

Kai Havertz's late winner for Leverkusen on Sunday made the 19-year-old the youngest man to reach double figures for the club.

After recent matchdays saw Germany bathed in sunshine, a late season snow flurry in Hanover caused farcical scenes on Sunday. Their game against Bayer Leverkusen was interrupted in order to uncover the touchlines, cones were laid out and brooms were in almost constant use.

But the most frustrating thing for the home side was the moment the white stuff stopped Genki Haraguchi from scoring. Snow goal.