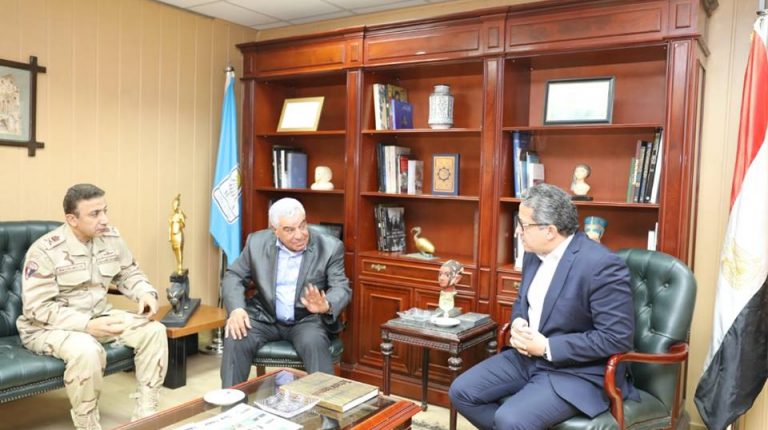 In preparation for the Grand Egyptian Museum’s (GEM) huge opening, planned to take place next year, Zahi Hawas handed the Minister of Antiquities, Khaled Anany, the catalogue of Tutankhamun’s hall, which contain the details of the 5,000 showcased relics belonging to the young king.

Hawas met with the minister and Atef Meftah, the general director of GEM on Tuesday to give them the booklet he has been working on for six months, according to a press release published by the ministry of antiquities.

Hawas had presented the booklet as a personal gift to the project he started when he was the minister of antiquities back in 2002.

The GEM is planned to have the whole collection of Tutankhamun’s monuments which were discovered in his burial chamber in 1912 and were never displayed before.

Furthermore, Hawas also discussed during the meeting the details of the opening ceremony opera, which is planned to be about the life of the young king.

The renowned Egyptologist was the one who wrote the play ‘Tutankhamun’ which depicts the life of Tutankhamun as the younger pharaoh and king to rule Egypt, focusing on the dramatic events that changed his life from an early age until his death.

For over a year, the ministry of antiquities has been transferring the king’s belongings from museums all over Egypt preparing for the GEM’s opening. So far, nearly 4,500 monuments of the total collection have been safely transferred into the GEM’s restoration labs and have already received treatment.

The opera, according to a previous statement by Hawas, recites the historical timeline of the young pharaoh, since he was a little child who was born and raised by his step-mother Nefertiti. It also tells the story of Nefertiti, the jealous step-mother who does not want Tutankhamun to rule after his father, to the extent of requesting one of Egypt’s enemies to kill him.

Hawas added in his statement that the king is not the only star of the play, as it highlights the roles of Akhenaten, Nefertiti, Horemheb, and Ay, along with other important figures who helped shape history as we currently know it.